In a Vase on Monday. In the Pink.

Today, I  thought I would create a vase using silver foliage and  just the pretty, late flowering pinks,   Dianthus rupicola which comes from Sicily.

Unfortunately, I am unable to use restraint whether  in a vase or in the garden. There are always so many other pretties that catch my eye. The minimalist gene seems to be missing from my make-up. So the vase got filled up with many other pink flowers and even bits of purple and lilac.

I went to a talk on Saturday by Twigs Way, who is writing a book about the social and cultural history of the carnation. Who would have thought that the little Dianthus could have accrued so many layers of religious and cultural significance over the centuries? Our knowledge of it dates from classical times, for it was cited by Theophrastus. Christianity adopted it as a symbol of Mary’s tears and just to make sure that it was a Christian symbol divorced from Pagan beliefs,  the flowers were also said to represent nails that were used to nail Jesus to the cross. It is used widely in Renaissance nativity paintings.

Later the flower came to be associated with revolutionary movements. The Carnation Revolution in Portugal in 1974, was so called, because not a shot was fired and people came out to adorn the rifles and uniforms of the army with carnations.

Oscar Wilde adopted the green carnation as a symbol of his sexuality.I saw him relaxing in Merrion Park in Dublin earlier this year. As you see he is showing us his carnation.

What really surprised me is that the word for pink as a colour was only adopted in the seventeenth century. The word comes from the pinked edges of the flower. Another surprise was the fact that the idea of pink for girls and blue for boys only became popular in in the 1940s. In the nineteenth century blue was considered much more feminine; after all the Virgin Mary was depicted wearing blue to show her purity. Pink was a more delicate shade of red and suitable for little boys as it was a paler shade of the martial redcoat. I have to say this little boy doesn’t look very happy in his pink dress.

Anyway, as usual I digress. My pink arrangement is in a cranberry glass vase and I have used a Chinese famille rose plate to carry on the pink theme.

The flowers include a dark pink rose ‘Princess Alexandra’.

I have used two Salvias. One is Salvia ‘Wendy’s Wish’ which flowers all summer. The other is Salvia involucrata ‘Bethellii’ which is late flowering but reliably hardy. 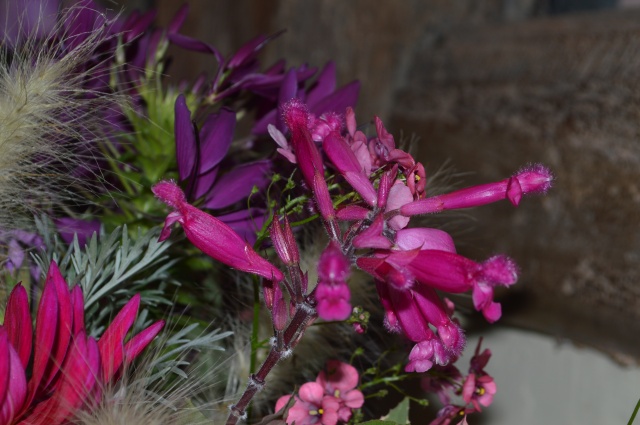 I used some Diascia personata which flowers all summer long and gets bigger and better as the season goes on. The foliage is artemesia , santolina and pink variegated  fuchsia. The feathery pennisetum seedheads keep getting recycled in my arrangements.

I used Dahlia ‘Rebecca’s World’ and cleome. I think Cleome spinosa is well named. I have never picked it before but it is really spiny and uncomfortable to handle.
I finished the arrangement off with some colchicums. Cathy used some last week and I thought how pretty they look. I had never thought of picking them before. 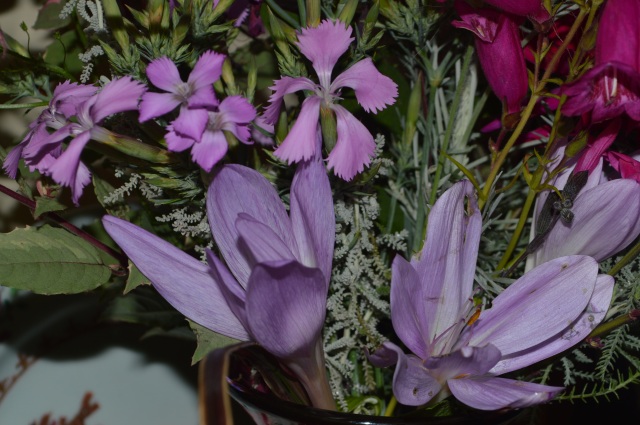 So there we have my pink offering today.

Thank you Cathy for hosting. Everyone is out picking flowers today for In a Vase on Monday. Do join in.

49 Responses to In a Vase on Monday. In the Pink.