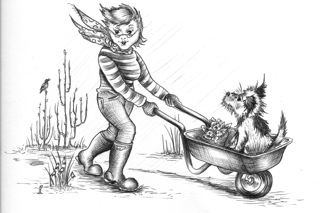 In the Eighteenth century William Kent and Capability Browns’ designs for gardens swept away the formality of the Dutch style with its canals, parterres and box hedges. In fact, sometimes they swept away villages which were inconveniently in the way. Then Romantic gardens became fashionable and mountains which had always been terrifying were admired. People wanted precipices and grottos and places to be melancholy in.  Rockeries were built on a monumental scale to represent actual mountain ranges. Victorians stripped the countryside of ferns to fill their ferneries. Greenhouses were heated and rich people spent fortunes on new exotics planted out each year to look like oriental carpets.

Since then fashions have come and gone with new designers reviling the taste of those who went before despite the fact that they shamelessly plundered gardening motifs of previous generations.

Alexander Pope said ‘Consult the genius of the place’ when gardening and this was probably the best horticultural advice ever. But of course it has usually been ignored because time and again the craze for exotic foreign ideas sweeps the country. The craze for Chinoiserie left us with an incongruous Chinese Pagoda in Kew Gardens. Everybody wanted their garden to look like a willow pattern plate. The Edwardians admired Japanese gardens and suddenly there were tea houses, raked gravel and tortured trees everywhere.  Italian influences have never really left us and many designers still think that our gardens should  be mostly green and resemble the Boboli Gardens with box, topiary, and long vistas.

William Robinson and Gertrude Jekyll ushered in the Golden Age for English gardening with its naturalism and subtle colour schemes. Cottage gardens became all the vogue and paintings showed rural idylls of cottage gardens complete with picturesque peasants. Of course the whole idea of a cottage garden is an artificial construct because they never were or could have been beautiful. Peasants needed their land to grow vegetables.

For many years pastel colours were the only sort to grow and gardens up and down the country were made insipid with monochrome gardens in white or blue. Anything in red, orange or yellow was terribly vulgar.  Foliage became important but it had to be grey. (Except it was called silver.) There was even a nursery devoted to it. Mrs. Desmond Allwood sold silver plants and pinks. Yellow which was eschewed in flowers was embraced in foliage because it wasn’t called yellow it was called gold.

In the 1970s people decided that gardens should be labour-saving and designed for people who couldn’t be bothered to garden. Herbaceous plants were no longer grown because it was felt that staking your delphiniums is too much of a chore.  The awful concept of ground cover plants became popular and people were encouraged to plant such horrors as Vinca, Lamium, Symphoricarpos and Hypericum.

Then there was the craze for island beds of heather and dwarf conifers made popular by Adrian Bloom. This has left the suburbs full of huge conifers which turned out not to be dwarf after all. Fashion quickly changed again and you still hear people coming out with that old cliché: ‘the only place for heather is on the moors’. (This is almost as annoying as people saying ‘the garden just growed like Topsy’.) Anyway Erica carnea doesn’t grow on the moors and there is nothing like it for winter colour.

Now perennials are making a comeback and also at last we can have colour without being considered vulgar. Dahlias have been reinstated; for a long time it was only considered acceptable to grow the Bishop of Llandaff but now people are not ashamed to plant brightly coloured ones with green leaves. You can even grow Kniphofia, and not only the tasteful ‘Jenny Bloom’.  Sarah Raven has done a lot to encourage adventurous colour schemes.

This is all very liberating but of course there are voices saying that our tradition of English country garden is reactionary and old-fashioned.  I sincerely hope that the cult for prairie gardening is on its way out now. We couldn’t have come further from Pope’s advice to consult the genius of the place than this weird idea that to create an American prairie is a naturalistic way of gardening in the UK. It is a good idea to plant flowers in a matrix of grasses, in other words create a meadow. After all, meadows have been constantly reinvented since the Elizabethan flowery mead.  But the style promoted by Piet Oudolf and Noel Kingsbury looks good only for a couple of months in late summer.  After that you have to content yourself with dead seed heads and pretend you like looking at them. There are signs though that people feel that the English flower meadow is the sort we should be encouraging; suddenly cow parsley is the in thing. Designers say that we cram too many flowers into our gardens and we should restrict our palettes to broad sheets of colour. I feel very strongly that people should be free to make of their gardens what they will without arbiters of taste telling them that they are vulgar or old fashioned.