A Last Hurrah for the Dahlias.

We have been threatened with frost this weekend and so I suppose my dahlias are probably living on borrowed time. But what an abundance of blooms I have had over several months. I am a total convert now. My grandmother used to grow them in serried ranks and as a child I was revolted by the earwigs they attracted and of course there was always the possibility that the earwigs might crawl into your ears and lay eggs in your brains. Or so my big sister told me. But this year I have been revelling in them and although the earwigs are a bit of a nuisance, so far I have managed to keep them out of my ears. I started off a few years ago growing the black leaved ‘Bishop of Llandaff’ as so many of us did. I then amused myself by growing on seedlings and trying to get really black children like this one. 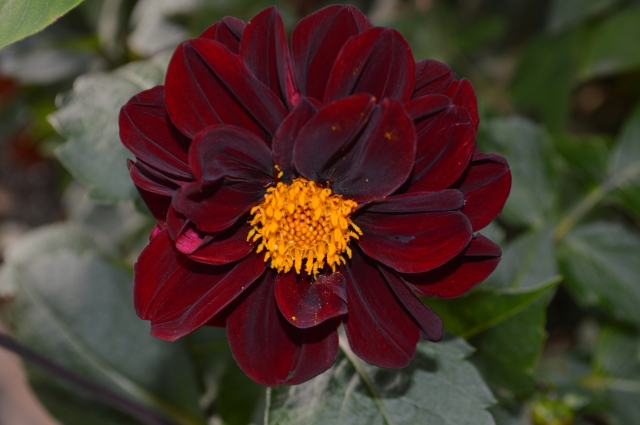 This year I have enjoyed  bright red children as well as the dark ones  and to my astonishment this pink, stripey one. Goodness knows what the naughty bishop has been up to. 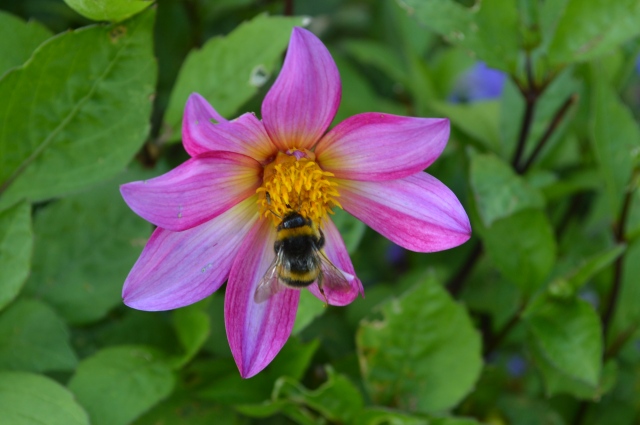 This spring I created a large new tropical bed  so I could indulge my new-found passion for these gaudy beauties. Never mind tasteful dark ones with black leaves,  I bought the brightest coloured pompoms, dinner plates, anemone- flowered ones and the rest; anything which took my fancy.  They needed copious watering throughout the hot dry summer, proper staking and feeding two or three times during the season, but what rewards.

The perfect pompoms of ‘Cornel Bronze’ are still going strong, this photograph was taken today. I love the soft apricot colour.

I grow a lovely anemone -flowered tangerine one called ‘Totally Tangerine’. Both of these two look great with the almost black ones which I still seek out. 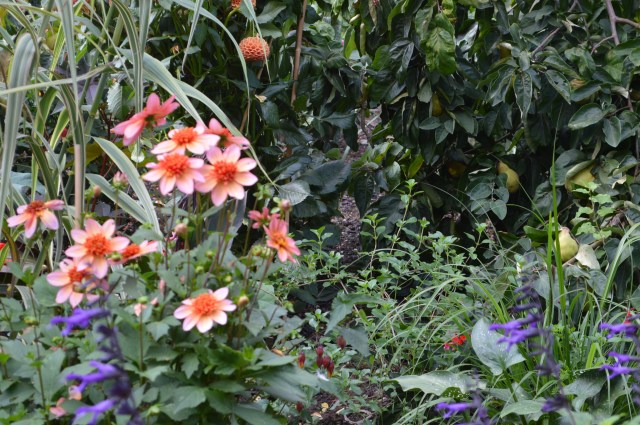 These anemone- flowered ones are sometimes called powder puff dahlias and you can see why. I love them and next year I shall probably grow a few more.
‘Blue Bayou’ is  a vibrant pink with red centres.  The flowers vary and on some of them the ‘powder puff’ is missing. 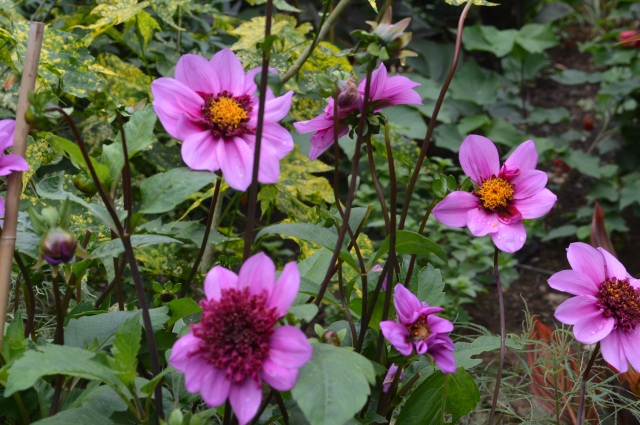 Dahlia ‘Mambo’ is pink with such beautifully formed petals it looks as if somebody has cut them out with pinking shears. 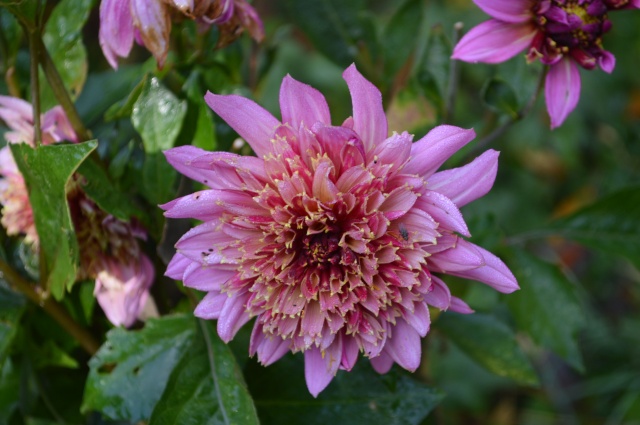 I am not terribly keen on the dinner plate dahlias or ‘Giant Decorative’ as they should be called, but I grow the popular ‘Cafe au Lait’ simply because it is such a fabulous colour. There is also a ‘Cafe au Lait Rose’ which is a sport of it and  a lovely soft pink. 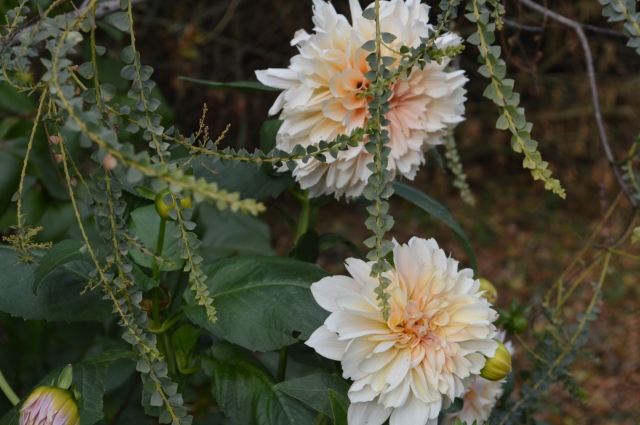 I have another giant decorative which is a gorgeous deep purple. It is called  ‘Thomas A Edison’ It is an American dahlia dating from 1929. It is a perfect foil for ‘Blue Bayou’. 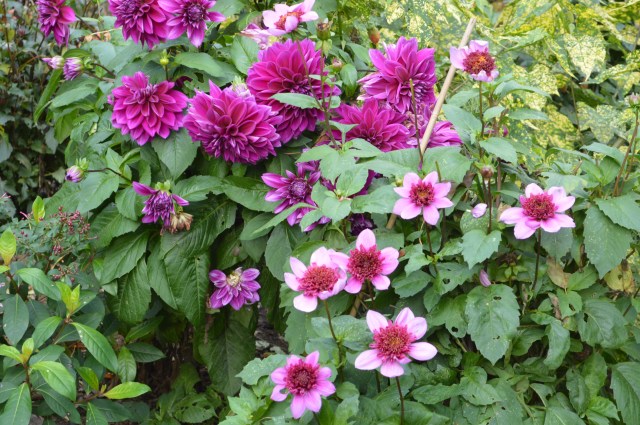 Another favourite is ‘Labyrinth’ which has lovely shaggy petals of a peachy colour mixed with pink. 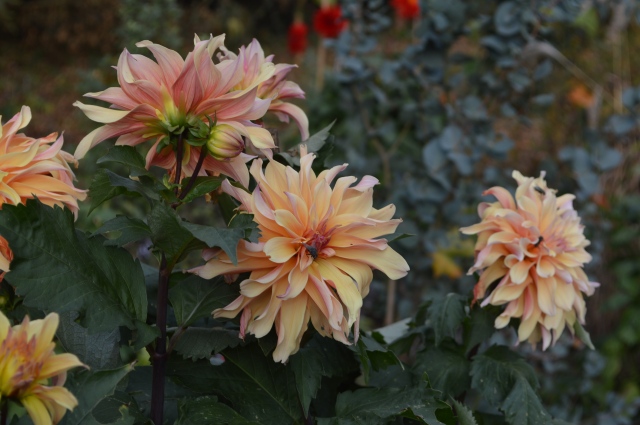 Another striking dahlia this time with bright pink and yellow Da-Glo colours is Dahlia ‘Karma Fuschiana’ . 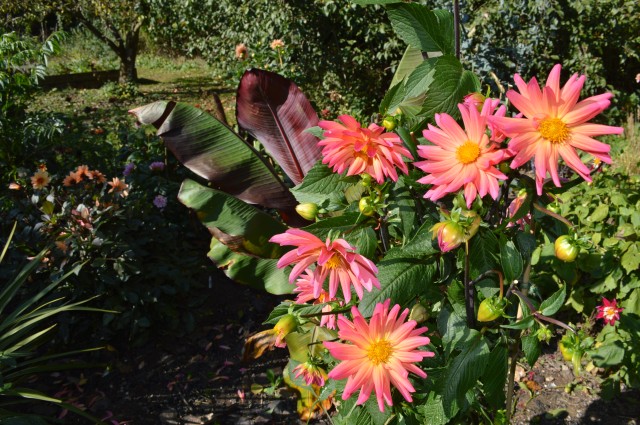 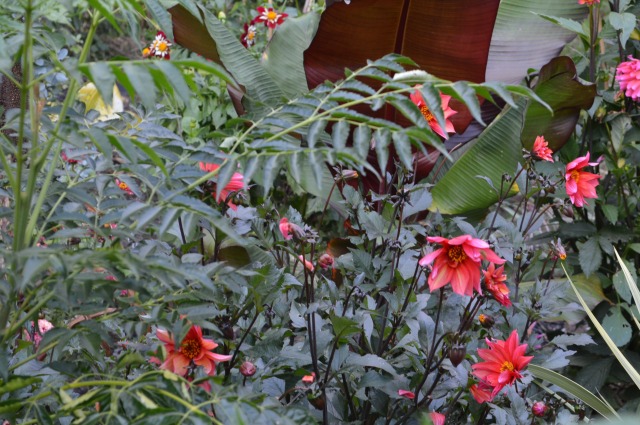 For a total contrast I have a delightful dahlia which is the colour of blueberries and cream. It is called ‘Creme de Cassis’. 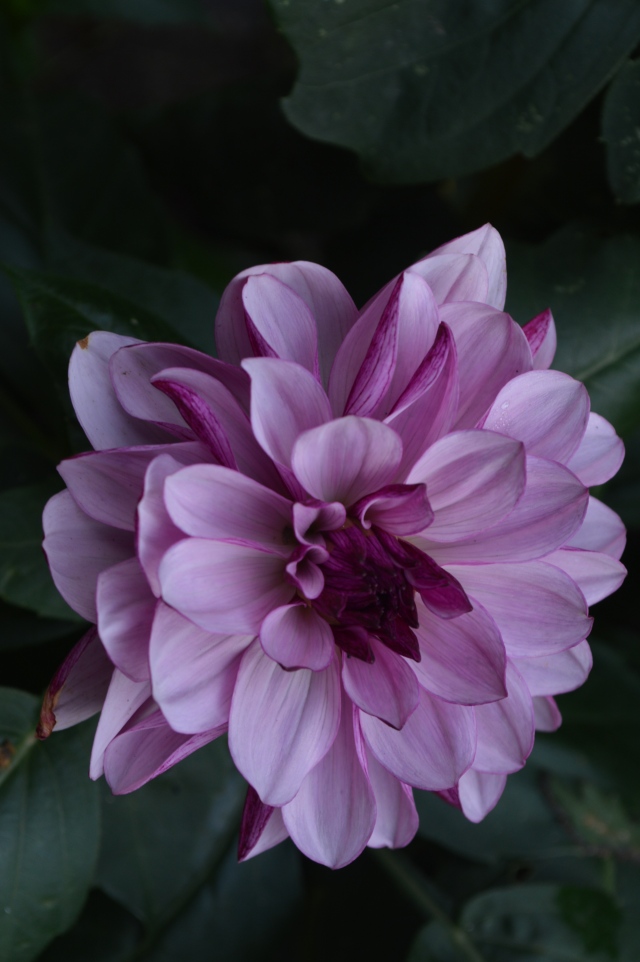 Single ones are beloved by the bees and so I had to include a few. ‘Night Butterfly’ is gorgeous with a central ruff of white petals contrasting with the velvety red. 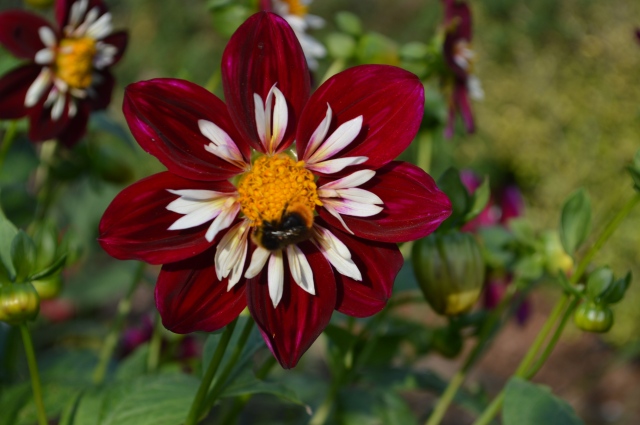 There are quite a few in the ‘honka’ series and I have a couple. I am rather underwhelmed by ‘Honka Fragile’. It has white petals delicately edged with pink. 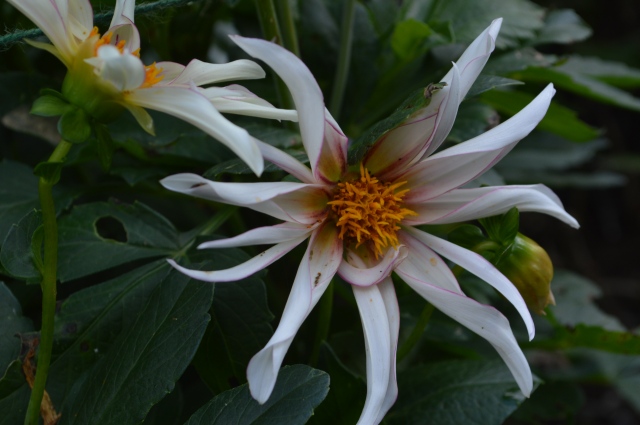 I prefer the starry flowers of ‘Honka Red’. 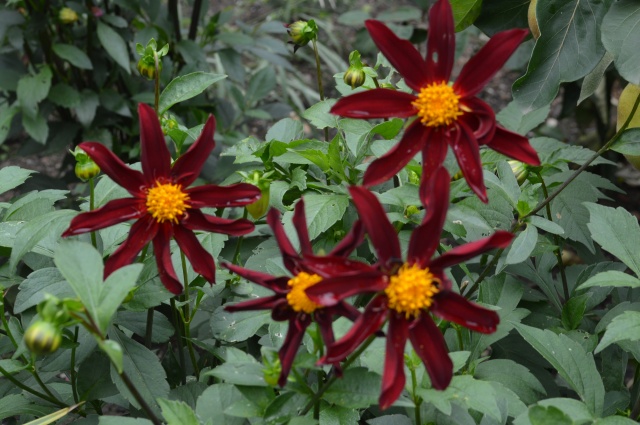 I love  red dahlias and ‘Apache’ is a particularly striking, bright red fimbriated one. 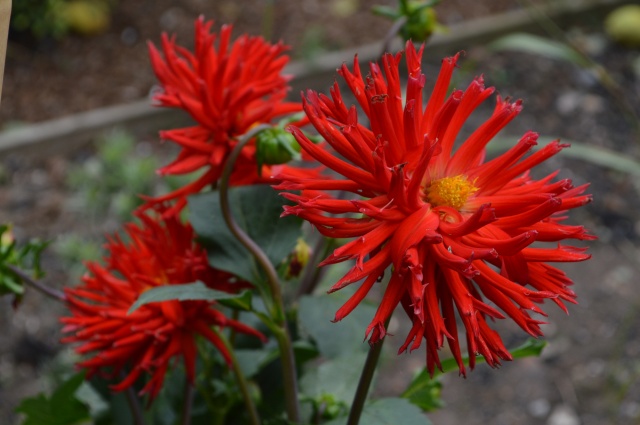 The best and brightest red dahlia is called ‘Murdoch’ and it has a story attached.
Thirteen years ago a man arrived at Bob Brown’s wonderful nursery, ‘Cotswold Garden Flowers’ with his car full of this dahlia which he had collected and  then grown on for years. He thought Bob was the best person to entrust it with and what a wise choice that was. Now we can all enjoy this fabulous dahlia which Bob believes is the best bright-red ever. I agree and that is why I have it as my header at the moment. I simply love it. 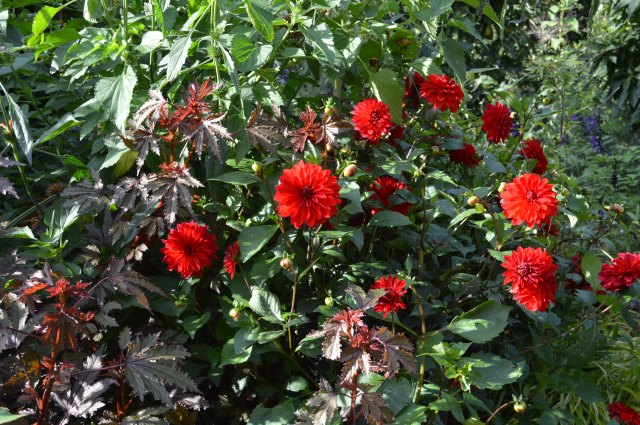 I have several sumptuous nearly black dahlias and I can’t decide which is my favourite. ‘La Recoleta’ is an almost pompom shape of perhaps the deepest colour.

But then ‘Karma Choc’ has such a delicious velvety dark flowers and stems too. 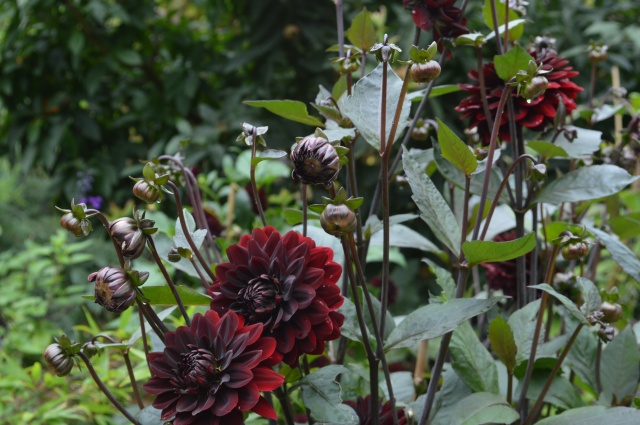 And ‘Rip City’ is stunning . 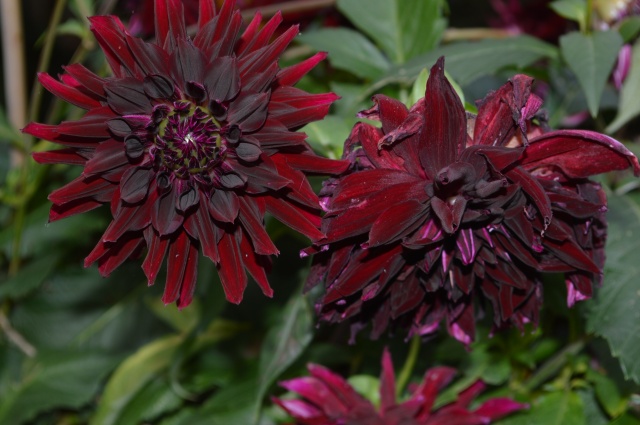 I have been enjoying these blooms in the garden and in bowls in the house since July. I shall be very sad to see them lying in black heaps after the frost has attacked them. I never dig dahlias up to store them inside. I believe it is winter wet rather than frost which kills them. After I have cut them down I cover the tubers in several layers of newspaper and then a thick mulch of wood chippings.

I am a bit late with my Top Ten October Blooms but I shall be posting it very soon. I really wanted to pay homage to my glorious dahlias before they disappear.

33 Responses to A Last Hurrah for the Dahlias.