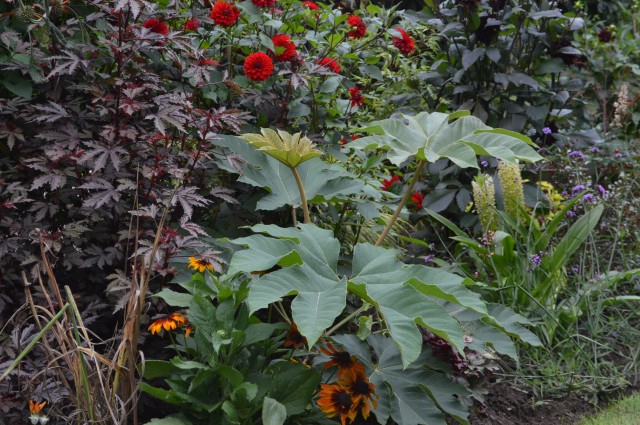 In March I started a new project which I had been mulling over for some time. When I created my secret garden three years ago I always planned accessing it through a jungle of lush foliage and vivid blooms so that it would indeed feel like a secret garden.

Last year I created a Mediterranean garden beyond it and this has been a great success. But the exotic garden has quite a different feel.

I learnt my lesson about removing turf to create a new garden when I dug up the lawns in the front garden and then three years later did the same to create the winter garden although I had help with that. First of all, I am getting too old for that sort of milarkey and secondly it is not a bright idea to remove your fertile top soil.

So no turf removal. I made the shape for the new area with the hosepipe and then covered the lawn with cardboard. When I couldn’t find any more cardboard I used a cheap weed membrane. Our bonfire area has clearly been used for this purpose for many years so when I excavated, I  found enormous quantities of ash which was light to wheelbarrow on to the new garden and quickly covered the cardboard and membrane.  The upside of using ash was the fact that after many bonfires it would be sterile and free from weed seeds, although bizarrely, several squashes have appeared growing in the ash and as I have never grown these, the seeds must have survived years of bonfires. Ash doesn’t look great but I planned on hiding it with plants quite quickly.  I then bought some  paving stones to create a path into one entrance of the secret garden and found a few slabs in the garden to make the other path.  So very quickly I was ready for planting.

Here it is in July when the pathway in to the secret garden was still accessible. You can’t even see it now.

Just as I was ready for planting, my lovely son decided to make some space and thin out the plants in pots on his wonderful jetty garden He appeared with, amongst other things, a black bamboo with a frilly skirt of the fabulous grass, Hakonechloa macra. There was a large olive tree, a Eucalyptus gunnii, a mimosa, Acacia pravissima and a huge variegated Arundo donax.  This was perfect timing and gave me some ready made dramatic foliage.  I added a couple of Tetrapanax papyrifer which has huge leaves, a variegated Castor Oil, Fatsia japonica ‘Spider’s Web’ a golden bean tree and some grasses.

I also bought a banana,  Musa basjoo which I hope will be hardy outside . 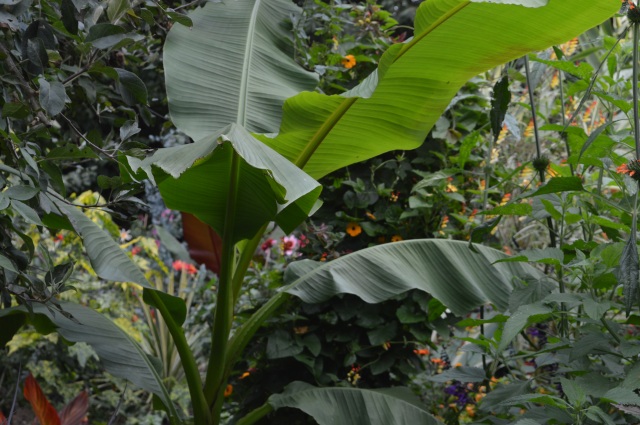 The red banana is not hardy, I had one before and eventually had to give it away when it grew too tall to fit inside the house.  I kept it for two years and used it for a rather recherché Christmas tree but then had to admit defeat when it reached the ceiling. In the following photo you can see the red banana with the Melia azedarach which I grew from seed collected in Greece four years ago. The silvery leaves of Eucalyptus gunnii are in the background.

New to the garden is this unusual yucca, Yucca aloifolia ‘Purpurea’. I have never seen it before.

In the shade along the paths I planted ferns.

I planted several grasses but the one which has astonished me with its enormous size is this Pennisetum setaceum ‘Rubrum’.

From seed, I grew climbing Mina lobata, (or  Ipomoea lobata as we have to call it now,) along with and Black-eyed Susie for height. For bright colours I grew orange Tithonia rotundifolia, lots of  colourful zinnias, Coreopsis tinctoria ‘Roulette’, tall Tagetes  linaeus and  sun-loving Gazania ‘Talent Red Shades’, bright orange Marvel of Peru, Mirabilis jalapa ‘Orange’.  Leonitus ‘Staircase’ grows ever taller with orange whirly bits at intervals on its long prickly stems. I love Ricinus communis for bold foliage but as I was worried that Hector might eat it I destroyed all but one plant which I hid away in the middle of everything. I grew various canna lilies but these will not germinate from seed unless you find some way of penetrating the hard skin of the seed. They are like ball bearings and trying to rub them with sand paper takes the skin off your finger tips but leaves the seeds intact. I only have a few plants. Next year I will put the seeds in the coffee grinder for a second. 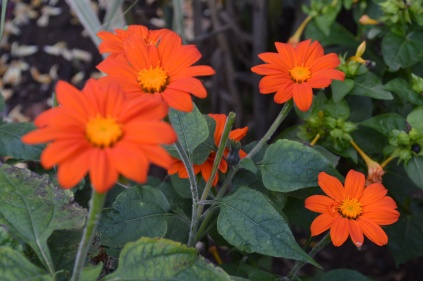 This garden is going to be quite work intensive because I have planted so many tender plants here including house plants.

The real highlight of the exotic garden is the fact that I got quite carried away when ordering dahlias this year and they have all grown wonderfully big and lush on a diet of chicken pellets and constant watering. I have grown a few dahlias for years, starting with the respectable ‘Bishop of Llandaff’ and several lovely seed grown ones from ‘The Bishop’. For years black-leaved dahlias were considered the only acceptable ones in sophisticated gardens, but now we are allowed to be as vulgar as we wish. I still love dark dahlias which are nearly black but I have plenty of big, blowsy ones in clashing colours too. Single ones are quietly pretty and bees love them. I love anemone -flowered ones like ‘Mambo’ and ‘Blue Bayou’ too. So here are a few of my favourites. 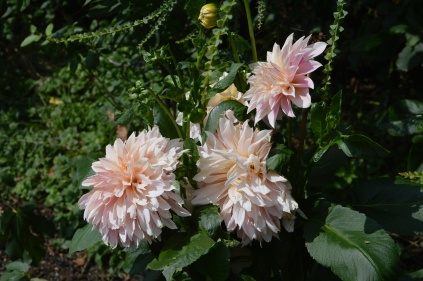 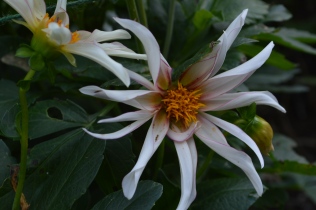 I could sit here all day talking about my exotic garden and if you were here I would take you down the garden for a close inspection of every plant. It is my favourite part of the garden at the moment. 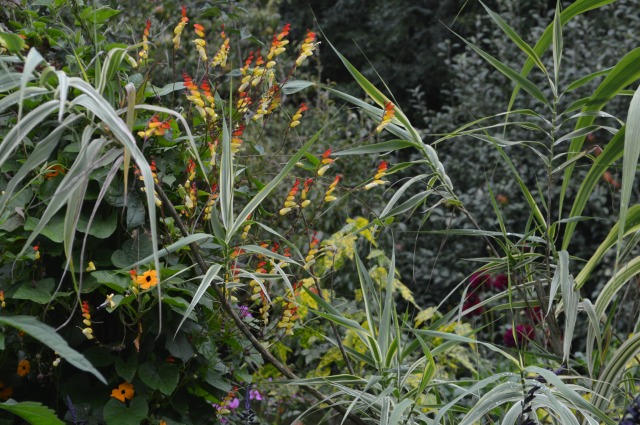 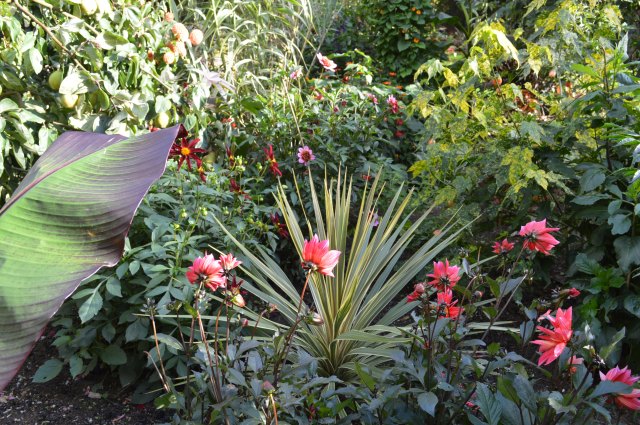 49 Responses to The Exotic Garden.

Garden visiting, looking at what is through the garden gate, especially those open for National Garden Scheme, with just an occasional foray here and there.