This is a tricky one, how does one choose just ten from all the glorious  blooms of April?    I have left out some favourites in order to include a few more unusual ones.

First of all, let’s hear it for the magnificent magnolia, an ancient tree which has  been around for millions of years.  There are more and more wonderful hybrids so nobody needs to grow the ubiquitous Magnolia soulangeana which you see in every suburban garden  This variety takes years to bloom and is often ruined by frost just when it is looking its best. When I moved here there was not one single magnolia in the garden, so I chose varieties which I knew would bloom when they are young. Some of them bloom in late March or early April and and some  a bit later. The first in flower is snowy white  Magnolia stellata with strappy petals ; sorry tepals, magnolias don’t have petals. It is lightly fragrant which is a bonus. This was a gift from dear friends so it is extra precious.

Just as beautiful  are the pink flowers of Magnolia stellata’s child  Magnolia x loebneri ‘Leonard Messel’ . Like stellata this blooms at a young age, but it is fast growing, mine is only six years old. As you see it blooms prolifically. It is slightly fragrant and reasonably frost resistant. 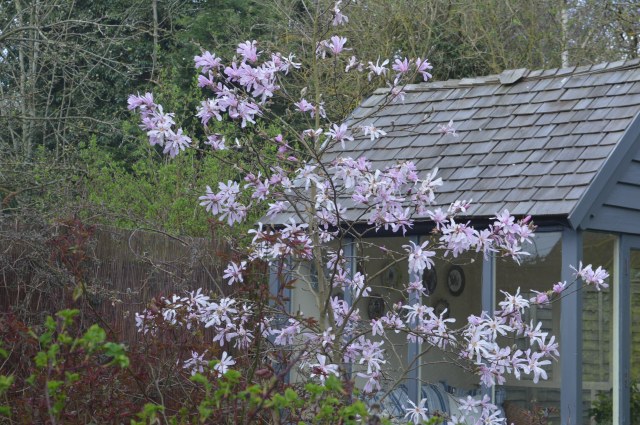 Another magnolia which grows fast and blooms generously when still young is a New Zealand hybrid called ‘Star Wars’. This was recommended by the late Princess Sturdza, owner of the wonderful garden near Dieppe, Le Vasterival. She knew a good plant when she saw one. It has Magnolia campbellii as one of its parents and has inherited the enormous flowers. Magnolia campbelli takes years to flower and blooms early so the flowers are often destroyed by frost so it is not suitable for Suffolk or for an impatient gardener. ‘Star Wars’ is a glorious sight in full flower. Mine is only seven years old. 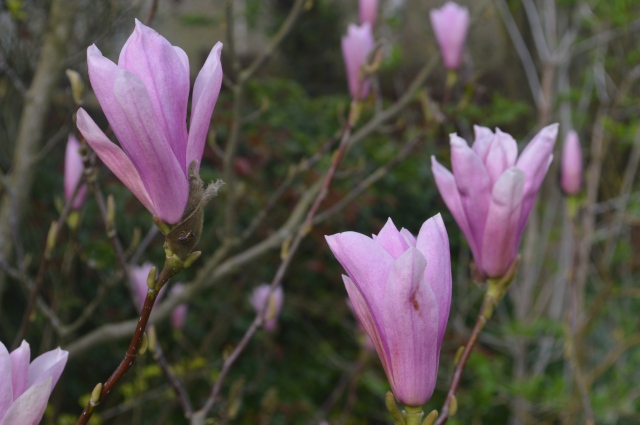 The other parent of ‘Star Wars’ is the dark pink Magnolia liliflora. I  have a dark form called Magnolia lilifora ‘Nigra’. I layered the one in my previous garden and so I was able to bring this with me. It is about ten years old now. Magnolias are easy to propagate by layering, just pin down one of the lower branches and cover it with soil.

Even darker than Magnolia liliflora ‘Nigra‘ is a wonderful hybrid with globular flowers called ‘Black Tulip’. So far it only has a few flowers, but it’s still very young. 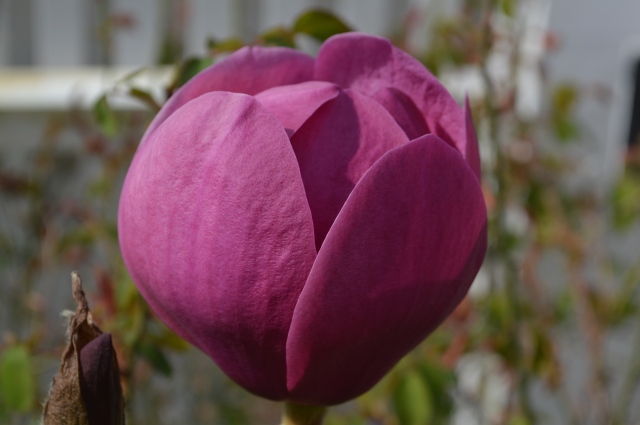 So those are my April magnolias, I have one or two more but they will have to wait for another time as they are only just coming into bloom.

And now for a rather unusual shrub. It is in fact a  flowering currant called Ribes speciosum although everyone who sees it thinks it’s a fuchsia. It has glossy leaves and bright scarlet flowers which look like dangly ear rings.  It enjoys the warmth of a south facing wall.

It also comes in two- tone, pink and white. This is called Lathyrus vernus ‘Alboroseus’. I don’t know which is prettier. 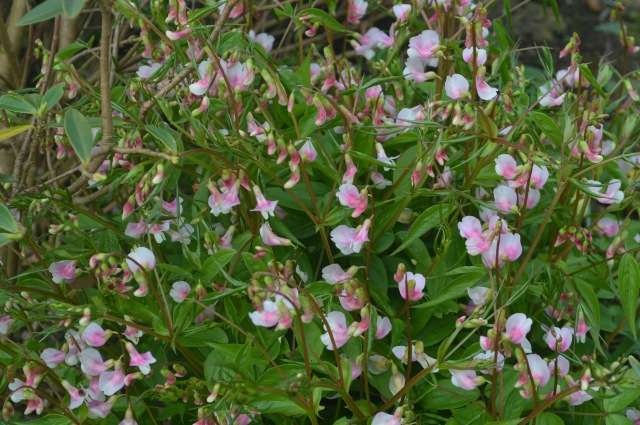 I used to grow quite a few different euphorbia but I am a little wary of them since my daughter had to have medical treatment after rubbing her eye after handling one. This was after she had washed her hands too, she couldn’t see properly for three days.The sap can actually burn the cornea and cause blindness so she had a lucky escape.The sap will blister the skin too specially if the sun gets on it. But, I do love it at this time of the year. Euphorbia amygdaaloides var. robbiae is quite invasive but it looks lovely running around with camassias and bluebells. (Spanish I’m afraid.).

The common name for this euphorbia is ‘Mrs. Robb’s Bonnet’. Apparently Mrs Mary Anne Robb found this euphorbia growing in Istanbul in 1891 and brought it back in her bonnet box.  Ouch, I wouldn’t fancy getting the sap on my head!

I grow the large Euphorbia mellifera because it makes a real statement and I love its honey scent. It comes from Madeira so it can get knocked back in a severe winter but it came through this last one with no ill effects. 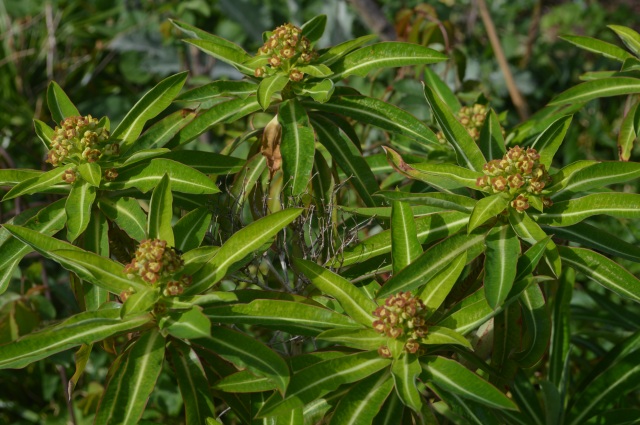 Despite saying I wouldn’t buy any more I rather fell for Euphorbia characias ‘Black Pearl’ for its neat heads and black frogspawn eyes and I had to have it. 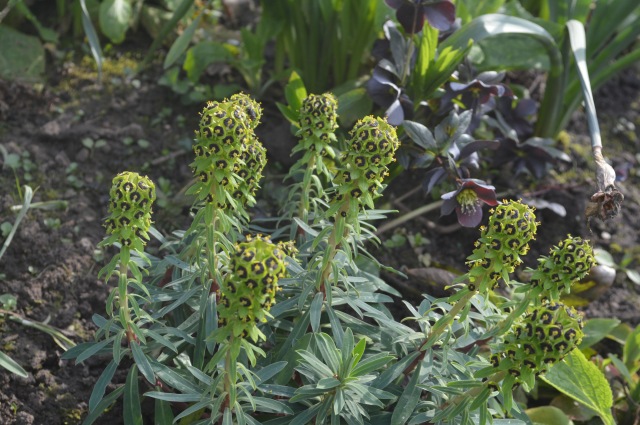 And at this time of the year I wouldn’t be without Euphorbia polychroma, it has such a nice neat habit and bright buttercup yellow flowers.

I feel a bit guilty recommending euphorbia when it has such dangerous sap so please handle it with care.

Spring is the time for woodland beauties, each one more beautiful than the other. I love the way Sanguinaria canadensis f. multiplex ‘Plena’ runs around and forms large pools of gleaming white round flowers. It has lovely bluish scalloped leaves. This plant too has toxic sap which is bright red giving it the common name of ‘Bloodroot’. It can cause nerve damage if ingested. What poisonous places our gardens are with such innocent looking flowers being potentially so dangerous. Later in summer this plant disappears so you have to remember not to dig it up by mistake.

I have a passion for fritillaries. We are lucky here in Suffolk as we have one of the few remaining meadows of native snakeshead fritillaries and it is looked after by the Suffolk Wildlife Trust so it is safe. In the garden they are easy to grow and seed around happily as long as the pheasant doesn’t peck all the heads off as he sometimes does when he gets bored. The usual snakes head fritillary has a checkerboard pattern in purple or you can get pure white. I rather like this cross between the two which is pink on a white background.

Crown Imperials spread well and are a dramatic sight either in red, yellow or orange. They do smell of fox though.

I am particularly fond of Fritillaria michailovskyi  even though  I  can never remember how to spell it. Any bell-shaped flower appeals to me and this one is maroon edged with yellow. It lives in a pot so that I can attend to its needs. It comes from Turkey and needs a sunny position but it mustn’t dry out.

My favourite fritillary is Fritillaria verticillata. It makes an ever increasing clump with tall stems and long tendrils .The flowers are cream with brown spots. 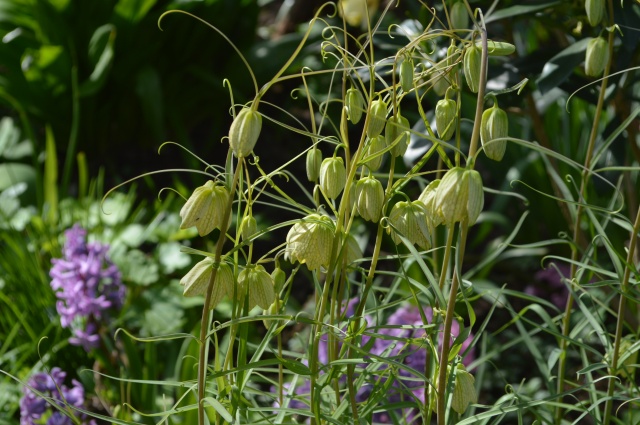 Epimediums are looking their best right now if you remembered to cut off the old leaves. Cathy at WordsandHerbs lives in Bavaria and she tells us they are called Elf flowers in German and what a good name for them. They are  elf -like and so dainty. 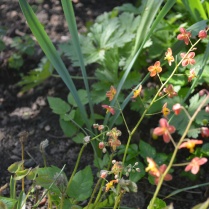 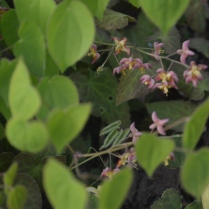 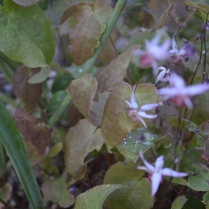 Another gorgeous woodlander is the exotic- looking erythronium. They seed around happily so you soon get big clumps. The cheapest and most readily available is Erythronium ‘Pagoda’. 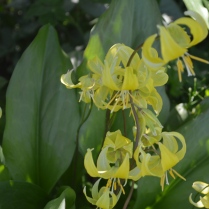 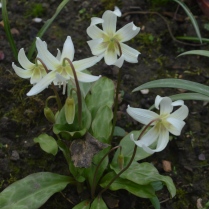 I love Arum creticum which has glossy leaves and bright yellow spathes. It seems to enjoy a sunny position. It doesn’t have the disgusting smell of other aroids such as Arum dracunculus which smells of rotting flesh. In fact it is pleasantly fragrant. This arum is not invasive but seeds around modestly and each plant is welcome.

I am going to finish with something rather unusual. It is the beautiful alpine Soldanella alpina. I first saw  it a few years ago  growing in Switzerland near Zermatt and my heart was beguiled. 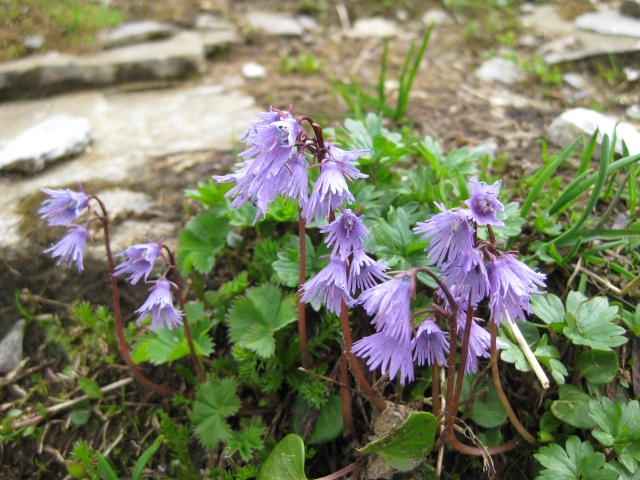 It has heart shaped leaves and fringed bell-shaped flowers like little pixie caps.
I can’t take credit for bringing my newly acquired plant into flower because this is how I bought it. I saw it and had to have it in spite of being told how difficult it is. Of course what it wants is moisture and the top of a mountain. Reginald Farrer says it is difficult to coax it back into flower because the flowers form in winter and so are vulnerable to winter wet or slugs. Maybe I should dig it up and keep it in a pot.

Even if it never blooms again it is giving me enormous pleasure right now and anyway we gardeners like a challenge. I never believe I can’t grow something until I have killed it three times.

Well there are my ten and I haven’t even mentioned tulips or trilliums or any of the other glorious blooms making my garden sing at the moment. Here are a few more. 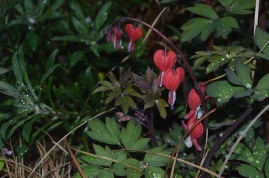 If you have the heart to pick out a few favourites this month please share them with us.