Grayson Perry’s ‘A House for Essex’ has been likened to a gingerbread house. I’d say it looks more like  a cross between the Taj Mahal and a Victorian public convenience.

On a dull January day when the ground was frozen too solid to work and I had finished examining each little shoot of every bulb and counted all the green spots on my snowdrops, we set off in the car and ended up over the border in Essex. The general feeling about Essex, in Suffolk where I live is- ‘There be dragons’ *, but I am fearless in my quest to find something new to entertain my blogging friends and also, my brother-in-law, who is an artist was staying with us and he was keen to see it. So off we went.

The house is one of five created for Alain de Botton’ s scheme, Living Architecture in collaboration with Charles Holland of  the London based architectures FAT.  His idea is to allow people to stay in houses designed by architects and artists. The House for Essex is so popular that you have to enter a ballot to get a chance to stay here. If you win you have to pay at least £850 for two nights and a lot more at weekends.

The tiny village of Wrabness on the  muddy banks of the river Stour is not the sort of place you expect to see a shrine to the butt of hundreds of ‘Essex Girl’ jokes. The definition in the Oxford dictionary for ‘Essex Girl’ is far from flattering and indeed there is a petition to have it removed. Actually, it is appalling that this awful stereotype of the  dumb, promiscuous  peroxide-blonde,  is perpetuated in a dictionary. But Grayson Perry who is an Essex boy himself, celebrates the life of his fictional Essex girl, Julie May Cope; indeed she is shown here as the divine female. 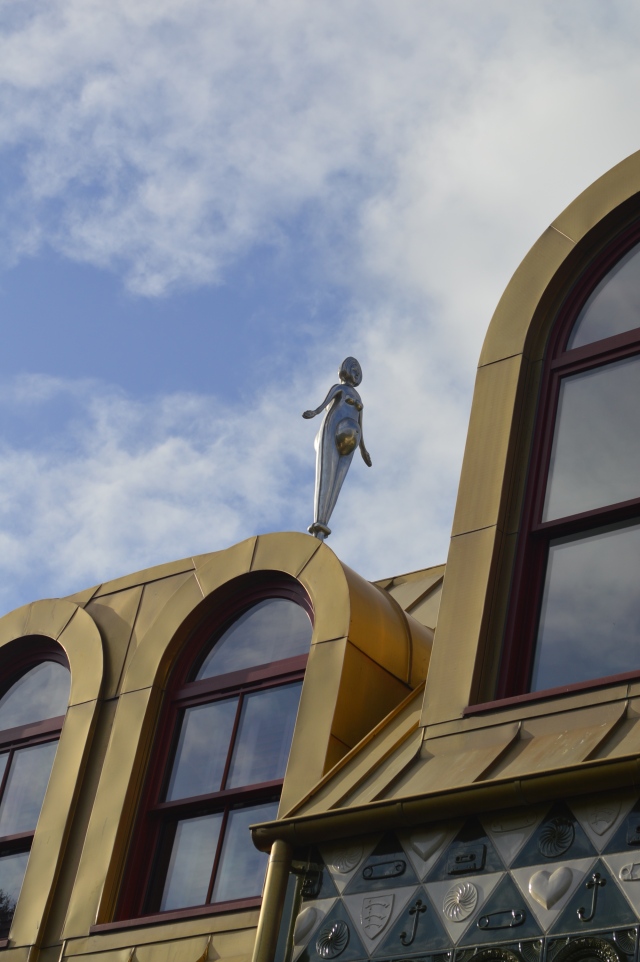 The story of her life and rise from a deprived background in Canvey  Island, her two marriages and death under the wheels of a take-away delivery moped is dramatised in tiles and inside on huge tapestries. There is a room devoted to both of her marriages and the deadly moped is hanging from the ceiling as a bizarre sort of chandelier.

There are four descending parts to the building  and it has been compared to Russian dollies, fitting one into the other.

The roof is made of shining copper and there are about 2000 , olive green and white ceramic  tiles.  The symbols are the Essex shield, a  large swirly J for Julie, safety pins, cassette tapes, hearts and  wheels. Julie  is depicted as  a naked, pregnant woman with her arms raised in a hieratic quasi-religious gesture. 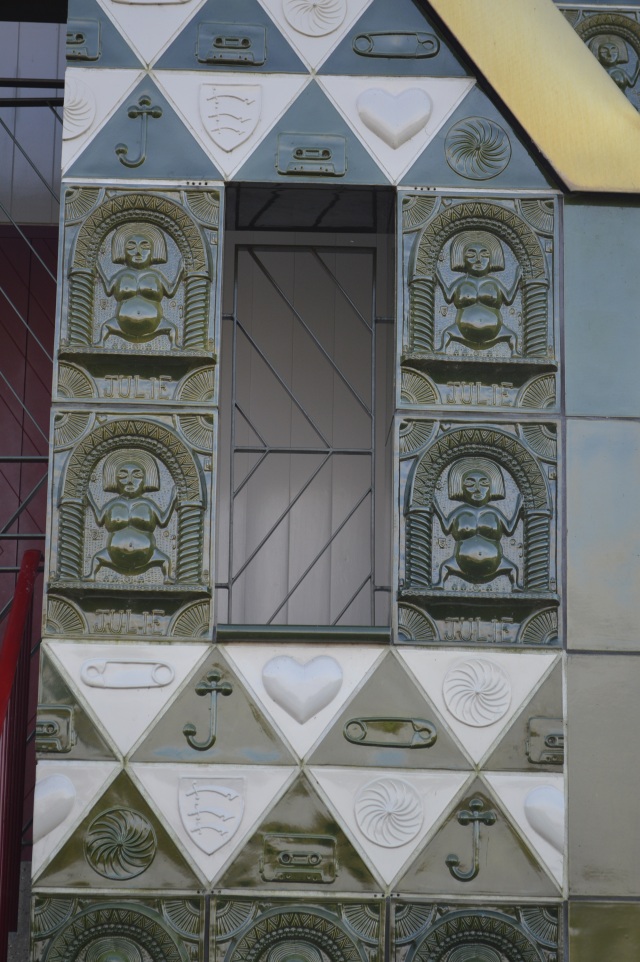 This year the House for Essex has been nominated for the Meis van der Rohe award which is the highest accolade in European architecture. I am  not sure what to make of it. Perry admits that it is absolutely ‘bonkers’ and indeed it is. But the idea of a folly is not a new one. Indeed there is Freston Tower on the other side of the river which is a six storey Tudor folly. And at Pentlow, not too far away there is a seventy foot tall, Victorian tower built by a Vicar in 1859 because his parents liked that particular spot.  So the House for Essex carries on a tradition of eccentricity. 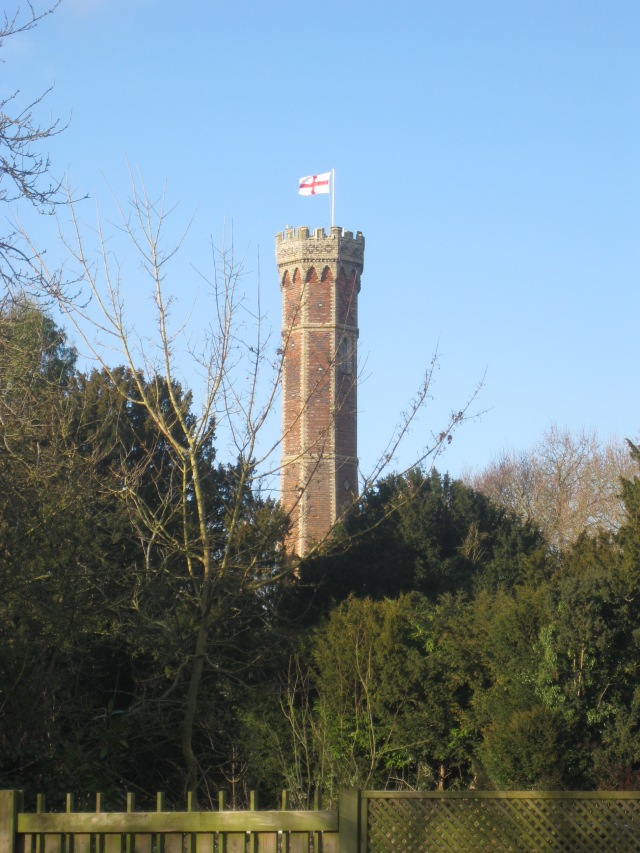 Eccentric it is and great fun, but is it art? That is a thorny question. Grayson Perry is the cross-dressing, self-publicising,  former winner of the Turner prize. In 2013,  he produced the four Reith lectures with typical flamboyance, dressed up in an astonishing frock and  heavy make-up which made him look like a cross between Dame Edna Everage and Little Bo-Peep. The title of the book he has written on the same theme as the lectures is appropriately called ‘Playing to the Gallery’.   He asked all the right questions about art- ‘What is good art and who decides?  But he failed to really answer them. He was too concerned with making the fawning audience laugh with one-liner gags. He is right that critics, curators, dealers and gallery owners are the arbiters of taste in art, but this  is not a new idea. It was addressed  in far more depth  by  Arthur Danto in two great books, ‘What Art is’ and  my favourite, ‘Beyond the Brillo Pad’. Perry is critical of the rise of curators and  awful arty jargon and the fact that art is big business . Ironically, it was the incredibly influential Saatchi who first made Perry famous.  Now he is very popular and at this rate he will soon be a ‘national treasure’. I am not sure why. I like his ceramic pots, some of them are beautiful, but I wish he didn’t have to make them ‘edgy’ and try to ‘push the boundaries’ in the words of these tiresome, arty clichés, by painting  obscene pictures on them. Some of them even have rude words written on them, which makes him seem like a naughty little boy trying to shock.

But enough about potty-mouthed potters, this is a gardening blog and it should be snowdrop time. The snowdrops are opening painfully slowly this year. In fact as the Pianist pointed out they should be renamed ‘Slowdrops’. ‘Three Ships’, ‘Faringdon Double’ and ‘Mrs. Macnamara’ have been going strong for ages and now at last  gradually, they are joined by buds on quite a few of the others. So soon I hope there will be more to show you. 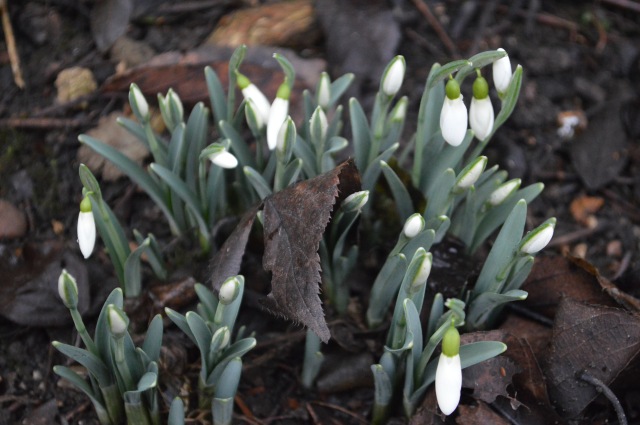 * I was joking about the dragons.  Actually, I love parts of Essex, specially the estuaries, and what John Betjeman called the ‘level wastes of sucking mud‘ are hauntingly beautiful.

There are also beautiful rural parts which Betjeman described as:

‘The deepest Essex few explore
Where steepest thatch is sunk in flowers
And out of elm and sycamore
Rise flinty, fifteenth-century towers. ‘

He is talking about the the Essex he found in an Edwardian picture book but not much has changed, apart from the total disappearance of the majestic elm trees.

44 Responses to The Gingerbread House.