It is hard work trying to restore this garden. It has some lovely mature trees and shrubs but it was sadly overgrown when we arrived. The first things that had to go were all the fussy little island beds.

The large bed round the cherry tree was infested with ground elder. I’m not sure whether I want to keep the cherry I don’t particularly like those big, blowsy flowers but my husband has voted for it to stay. I decided to make a pond here.

it is finished now. I would have preferred not to have a butyl lining because it always shows a bit round the top but I didn’t have the skills or the money to build a pond using any other method. I have made a bog garden at one end by sinking the butyl, making a few holes in it and filling it with good compost. The pots all round the edge are to keep out herons. it really works because herons like to be able to walk in to the pond and they can’t do that here.

By the summer house there were two pointless little circular beds looking very eccentric because the flowers here were carefully caged in. It must have been a precaution against rabbit damage but this problem has been solved for now by carefully mending the broken bits of fence round the perimeter of the garden. Anyway the beds had to go.

In their place we had a terrace built round the summer house where we can eat under the shade of the walnut tree. Round the terrace I planted Lavendula ‘Hidcote’.

The biggest problem was getting rid of all the overgrown rubbish round the yew tree;Taxus baccata ‘Standishii’. In the end we had to get someone with a mini digger to get the roots out. 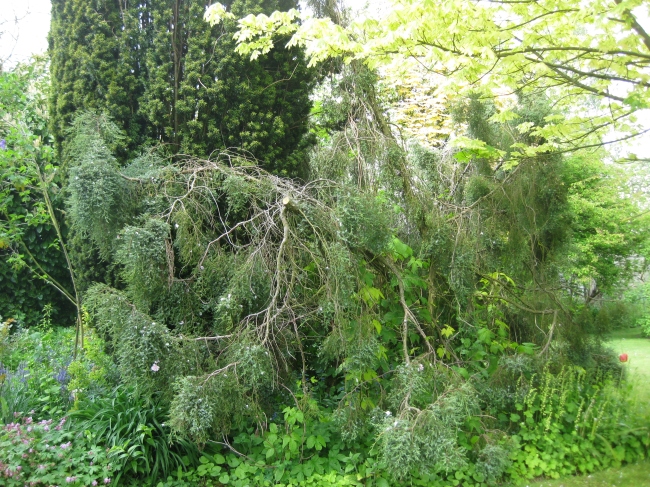 The last two island beds to go were one round the bird bath and one right next to it. I left the bed under the weeping pear: Pyrus salicifolia ‘Pendula’. This has snowdrops under it and in summer I plant white Impatiens.

I had to get help for all the heavy work but most of the gardening I do myself. My husband mows the lawns but that is all. He tells me he has to protect his hands as he is a pianist. Anyway he feels my obsessive gardening is rather eccentric; it is a bit like being married to a stamp collector or a train spotter, only more exhausting because stamp collectors don’t keep saying; ‘Can you just help me with this?’

The final picture shows the view without the island beds and there is ‘The Pianist’ using the garden for what he feels sane people should use it for- sitting.

When we arrived here just over three years ago the garden was in sad need of some tender care. My first job was to get rid of the many pointless little island beds in the back garden. Then  I turned my attention to the front.The garden was bisected by a garden path leading up to the door and on each side was a lawn.  This was surrounded by knobbly-kneed roses. R. ‘Iceberg’ is quite pretty but these bushes were well past their ‘Best Before’ date.

In front of the white picket fence there was a pointless strip of lawn too. What on earth is the use of a little bits and strips of front lawn? They had to go.  I dug them up. Under the lawn was a whole network of cherry tree roots which were hideously difficult to get rid of.  When I had finished I sat down and thought I might possibly die. The American garden writer, Martha Smith describes the feeling in her book; ‘Beds I have known’. There must be so many gardeners who will identify with what she calls ‘Planter’s Paralysis.’ The awful feeling you get when you realise that ‘you will never, ever rise again’ after you have used muscles that you were not aware you had.  Not only did I think that I would never be able to garden again but I thought that I would be welded to my chair for ever or else be condemned to crawling around on my hands and knees to the surprise of Pip, the dog who though it was some  exciting, new game.

In the place of the strip of lawn in front of the fence I put my collection of irises. Here they can sit and get there rhizomes baked by the sun and don’t have to compete with anything else for light. Unfortunately they have lost their labels as I have dug them up and moved them several times whenever I moved house. Some of them are Cedric Morris irises. The artist, Sir Cedric Morris lived near here and I have friends who gardened with him. Many gardeners round here grow his beautiful, delicate irises. I also have quite a few from the wonderful Cayeux iris nursery in France. These are big brazen ladies in sumptuous colours. I know they lack the elegance of the Cedric Morris ones but I don’t want all my irises to be tasteful. Their colours are absolutely gorgeous. They don’t last long and they need staking as they are so top-heavy but I wouldn’t be without them.  Here are some of my beautiful irises decked out in their glorious party dresses. 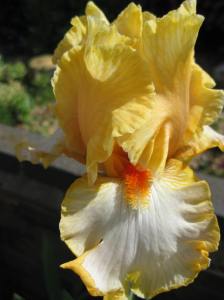 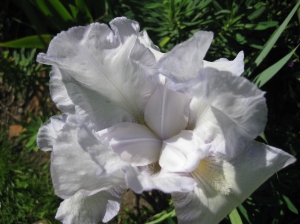 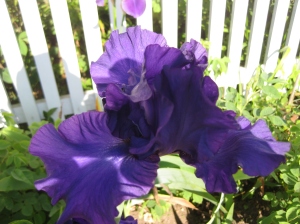 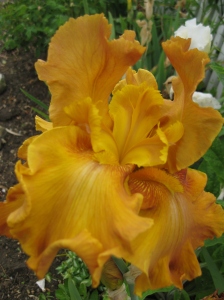 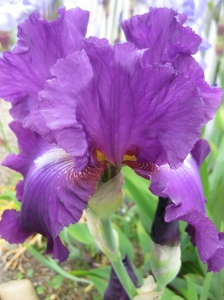 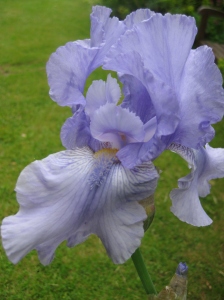 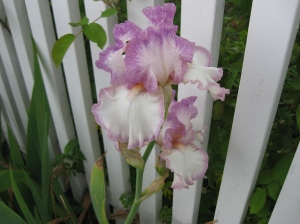 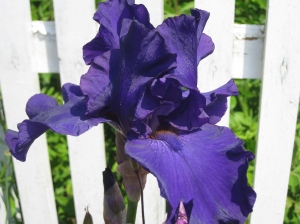 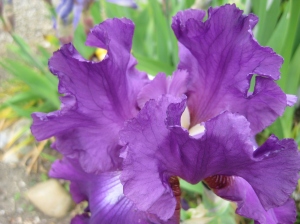 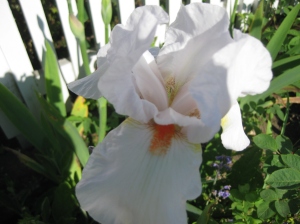 If anyone can help me name my beautiful irises I would be very grateful.

26 Responses to My Garden

Restoring Plot 1a: an overgrown allotment on the South Downs