In a Vase on Monday. Black Clouds

Last week I featured a pink Pussy Willow in my vase. The garden was full of blooms and looked springlike and I was keen to celebrate it. Today, the garden is still wearing its spring party dress but it’s forgotten its coat and so it’s shivering under constant downpours and howling winds. My plants and I are under a black cloud.  I have projects to get on with which can’t be done in sludge. Daffodils have collapsed, nose first into the mud.  A golden stemmed bamboo has heaved itself out of the ground and looks as if it is about to sprint off in search of a balmier climate.  I don’t blame it.

So it was the my black pussy willow which I was seeking out today. It is called Salix gracilistyla ‘Melanostachys’ and it comes from Japan.

Instead of adorable fluffy pink pussy willow, today my vase looks a bit sinister. I read somewhere that that the catkins of this shrub look like dancing black bears. They remind me of cat’s claws and I don’t mean adorable fluffy kittens. They have vicious-looking claws. These are the bud scales which drop off eventually.

I arranged them in my Victorian mourning vase to match their austere and slightly sinister mood.

I know this black pussy willow isn’t to everyone’s taste but I think it looks dramatic in a vase and if we can’t have sunshine and woolly baa lambs frolicking amongst the daisies yet, then why not a bit of drama.? 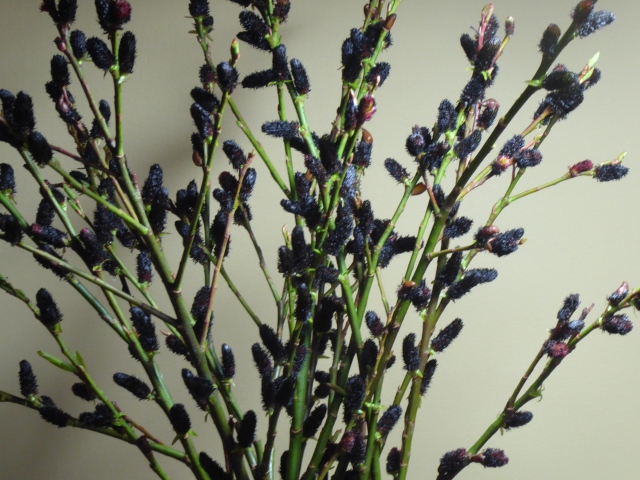 As the catkins mature they discard the claws and  the anthers become reddish in colour. 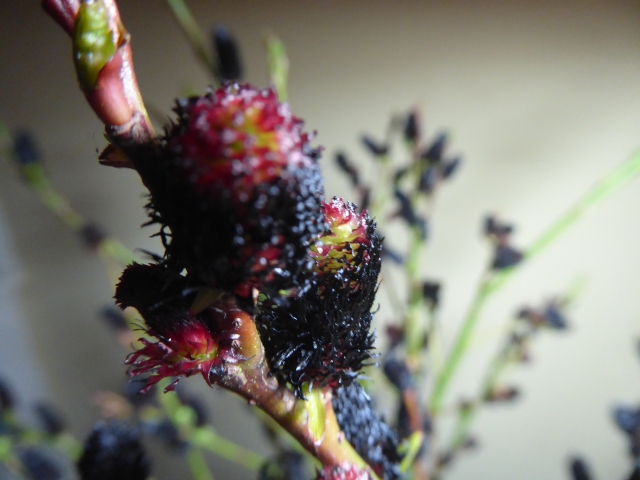 The final stage is when the stamens become covered in yellow pollen and then they will have to go outside. In the meantime the stems will probably root and I can have a forest of them if I like. But one is enough. It grows to about 6 to 10 ft but every couple of years I cut it right back when the catkins finish. It is not very interesting for the rest of the year but I wouldn’t be without it because now and then a bit of drama in your vase is good. I resisted my usual urge to cram lots of other flowers into the vase, this is a stand alone plant. 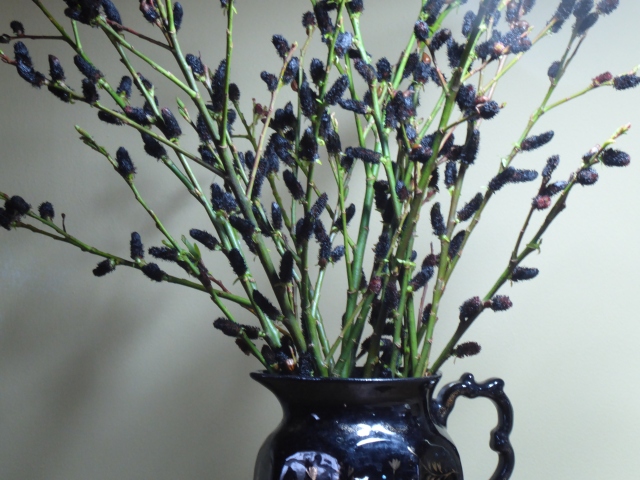 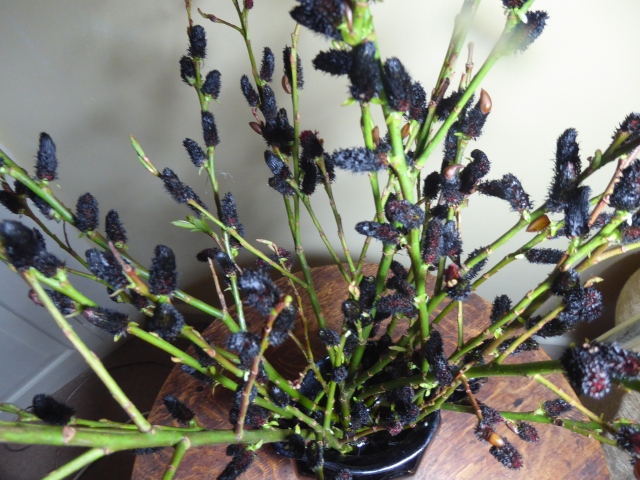 Willows need a damp position in the sun They are all dioecious which is a word with too many vowels which I can never remember how to spell or pronounce. It means the masculine and feminine flowers appear on separate plants.

Cathy at Rambling in the Garden has found some sunshine to lighten the gloom of her black clouds today. Do go and see.

40 Responses to In a Vase on Monday. Black Clouds