In a Vase on Monday. Snowdrops!

And pensive monitor of fleeting years!’  To a Snowdrop. William Wordsworth.

I’m not surprised that Lakeland Willy wrote odes to these little beauties. I almost feel one coming on myself, except in this day and age I don’t think you could get away with something like ‘Chaste snowdrop, venturous harbinger of spring’. Anyway, they are not really chaste at all, their promiscuity has given rise to many exciting new ones which  strain the purses of enthusiasts like me.

In January and February I pick handful of snowdrops  and have a succession of snowy white blooms on my dining room table.  I am lucky to have an ancient garden with drifts of the common snowdrop, Galanthus nivalis spreading everywhere. This is so common that many people think it is native. It actually comes from southern Europe but it has been growing so long in this country that it has spread from cottage gardens and churchyards and romps away on verges and woodlands in many parts of the country. I have two different strains, in some areas they are still in tight bud. 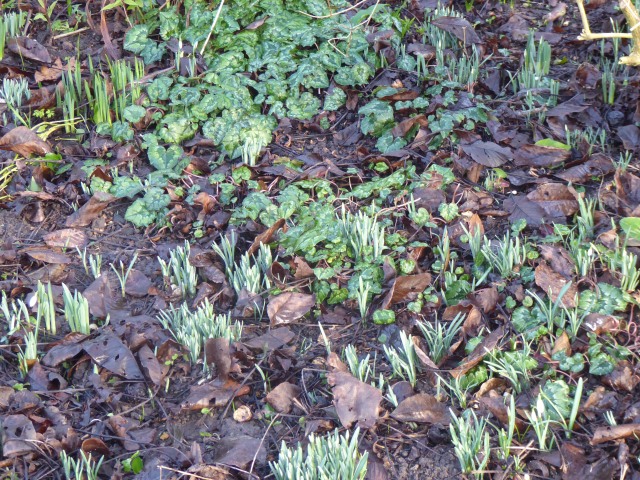 It has nothing to do with where they are growing, these next ones are in full sunlight. 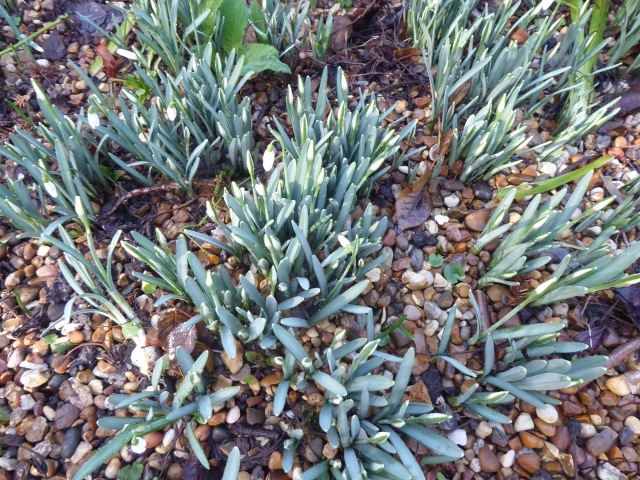 But these next ones are in full bloom. I tried planting some of these early bloomers in the same place as the late bloomers but it made no difference to their time of flowering so they must be a different strain. 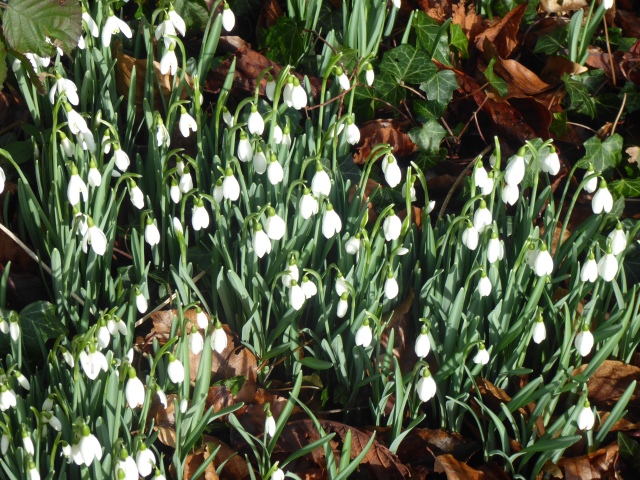 I suppose this clump needs dividing but it looks so pretty.

I noticed the ones in the churchyard are all in bloom too, so perhaps mine came from here years ago. 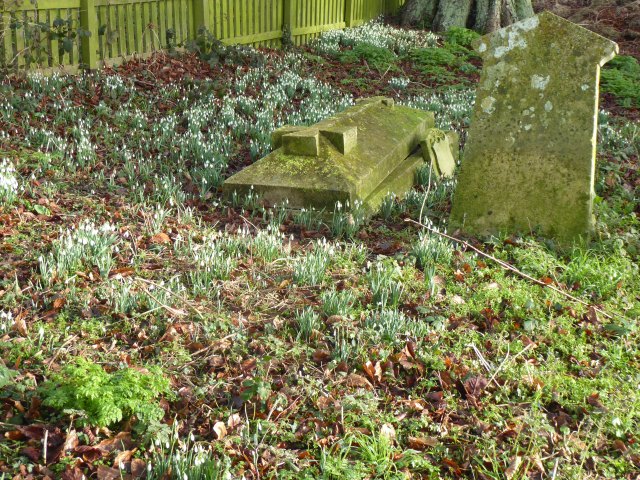 As they grow in such generous abundance there are always plenty for a vase. Here they are looking pretty in my glass snowflake vase.

But I wanted some fragrant ones too so I picked a few ‘Ginn’s Imperati’ as these are sweet scented; some people say they smell of almonds but I can’t detect that. They are large snowdrops and until Saturday when I saw ‘Ginn’s Imperati’ at Plant Heritage I thought this clump was the large, strong growing and fragrant ‘S. Arnott’.  But apparently I had my labels confused. I am pretty sure now it is ‘Ginn’s Imperati, and very pretty it is too. 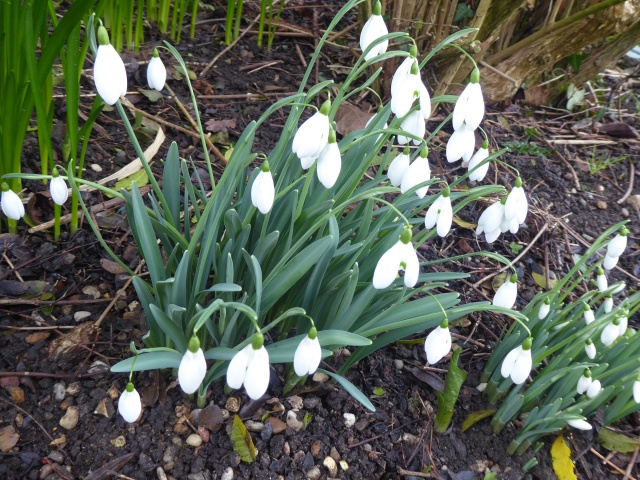 This snowdrop was found growing near Rome by a garden writer, Robert Calthorne-Hardy and grown on by Ron Ginns in the 1950s. A few in a vase scent the room. I put them in one of my old inkwells with a couple of leaves from Arum italicum. 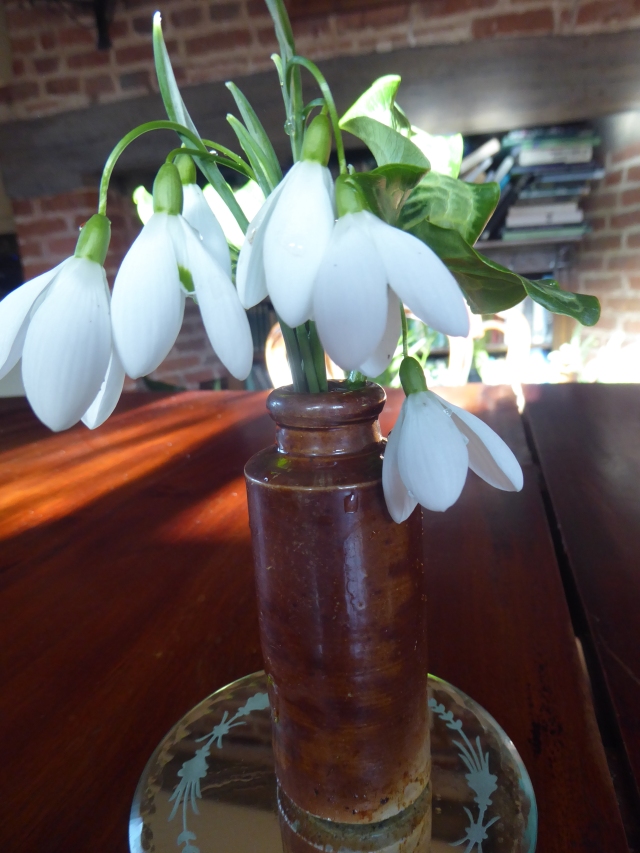 If you see them side by side with Galanthus nivalis you can see how much bigger they are. 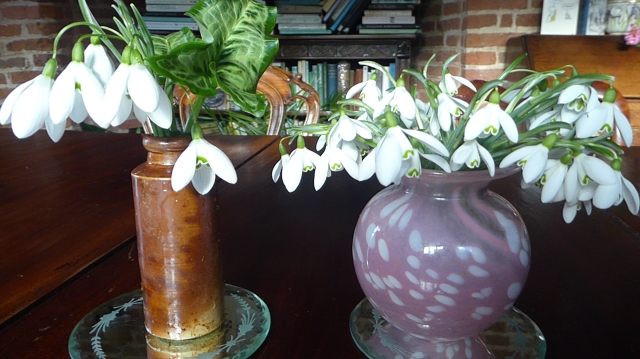 Whilst we are talking snowdrops, at least I am, your attention has perhaps wandered off if you are not a fanatic, but I am going to slip in just a couple more.

I do hope this is not just too much snowdrop for you, I don’t want to leave you feeling like this.

Thank you to Cathy at Rambling in the Garden for hosting In a Vase on Monday. Cathy too has the snowdrop bug and there is no cure for it. Do go and see and what Cathy and all the Monday vase fillers are doing today.

29 Responses to In a Vase on Monday. Snowdrops!