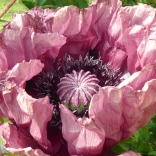 We have been away. We set off on Monday, swimming our way south despite Biblical deluges, sink holes appearing on the M25 and cars getting stranded on the M20. We fully expected plagues of frogs and locusts, but nevertheless we managed to look  round Sissinghurst and Great Dixter in the pouring rain. Or at least I did, the Pianist sat in the car with his crossword.

But now we are home and it’s Saturday again, time to look around the garden here for six eye-catching plants to share for Six on Saturday. The rain doesn’t seem to have done any damage and the roses are looking magnificent. But they are for another post. For my six today I have chosen some scrumptious poppies. I love all poppies for their silky petals and gorgeous colours. I would love to have the right conditions for the fabulous blue Himalayan poppies which grow in damper parts of the country. But looking round today, I realise that I have quite a nice range of different sorts of poppies giving pops of colour all round the garden.

First the oriental poppies which are so easy to grow, although they laze around languorously and need a bit of support. If you want to propagate them then taking root cuttings is the way to do it, although come to think of it, it might be fun to grow them from seed and and see what colours you get. The blooms don’t last long and the foliage looks a mess when they have finished flowering but you can cut them right back and they will come to no harm.  I love the dirty, faded-plum colour of Papaver  orientale ‘Patty’s Plum’ with its ruffled petals.

Cedric Morris used to say that his namesake, Papaver orientale ‘Cedric Morris’ was a washed out colour and reminded him of dirty knickers, which is rather rude and unjust as it is a pretty shade of  very pale pink.

I like white and black together on a flower so I grow Papaver orientale ‘Wedding Day’.

My father always used to grow the tall, bright scarlet ‘Beauty of Livermere” so I grow it too because it was in all our gardens when I was a child.

Red seems to be the proper colour for a poppy, and I wouldn’t be without annual poppies. Fields of wild poppies are a rare sight these days, but in the garden I grow the ladybird poppy, Papaver comutatum ‘Ladybird’ which is bright red with black blotches. It comes from Turkey and I have seen it growing in Crete too.

Bees love it too.

Opium poppies are easy and seed around each year.  I am surprised that we are allowed to grow them but then perhaps the process of making opium is rather complicated. I love the almost black ones, some of them come up double and others are single. If different colours appear I pull them out as I only want black ones. I started out with the fully double peony flowered one called ‘Black Peony’ but the single ones are pretty too. 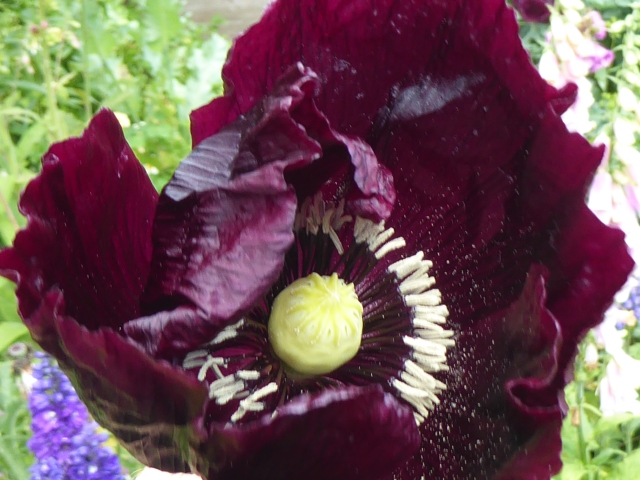 In my Mediterranean garden I have a pure white prickly poppy which has lovely foliage. It is a perennial and easy from seed. It is called Argemone platyceras. Graham Rice said that prickly poppies are among the unsung heroes of the poppy family and I agree, not many people seem to grow them. They like a nice sunny well drained position. 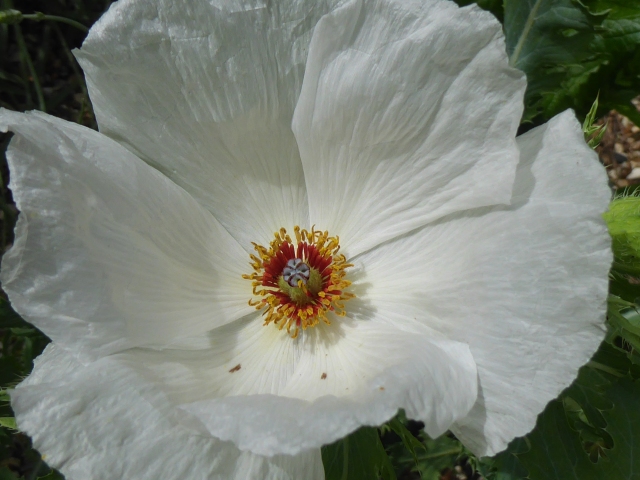 In front of my shed I have a ‘beach’ and here I grow an orange horned sea poppy, Glaucium corniculatum which has lovely silvery foliage and seeds around.

My last poppy has been blooming for ages and it just keeps on producing more and more double flowers all summer. I have never planted it and it puts itself about all over the garden so I just pull it out in areas where the bright orange would clash. It is Papaver rupifragum and it comes from Spain. I would probably appreciate it more if it was rare and difficult. But I wouldn’t be without it and I am not likely to be either.

Much as I love poppies, it seems a pity not to feature any of the other gorgeous June- flowering beauties; there is so much going on in the garden right now. But we have to be disciplined when joining in with the Propagator’s Six on Saturday meme. No rambling off on tangents, or ‘on a tandem’ as a friend of mine who was known for her malapropisms used to say. Never mind there is always another post, meanwhile do check out The Propagator and the many other bloggers who join him on a Saturday.