Wild Flowers of the Gargano.

I have been away. I really don’t like leaving my garden in April. But I have a book which features the 50 best sites for wild flowers in the world.

As a plant lover the idea of seeing plants growing in their natural environment is enticing. I’m not an intrepid traveller and I know I’ll only visit most of these places in my imagination. I am too frightened of snakes and wolves, bears and brigands, upset tummies, terrorists, ticks and tropical diseases. From my book so far, I have managed Transylvania, (despite vampires, wolves and bears,) the Peloponnese, ( not too scary, but vicious sheep dogs,) and the Burren in Ireland, (not scary at all.)

The Gargano peninsula which is the little spur sticking out from the heel of the boot of Italy has over 2000 species of plants and it has the highest concentration of wild orchids in Europe. There are over 70 species, not counting all the hybrids, which makes identification very frustrating for pedants like me who are very keen on the naming of names.  The end of April is the best time for all these gorgeous wild flowers and so reluctantly I had to leave my garden and hope that I wouldn’t miss too much.

But it was worth it.  Not only did I get to see glorious scenery, an abundance of wild flowers and more wild orchids than I have ever seen before, but my lovely blogging friend, Christina from My Hesperides Garden and her husband, Richard joined us and we had a lovely time together. It is wonderful to share orchid -gazing with like-minded friends. The Pianist was amazed that we could spend so much time staring at the ground, and sometimes wished that there was a wall handy where he could watch paint dry as a more entertaining alternative, but he enjoyed the company.

The Gargano was once an island. There is a vast forest of ancient beech trees romantically called La Foresta Umbra.

Here you can find carpets  of Anemone apennina in blue and white which are like Anemone blanda but bigger and taller. 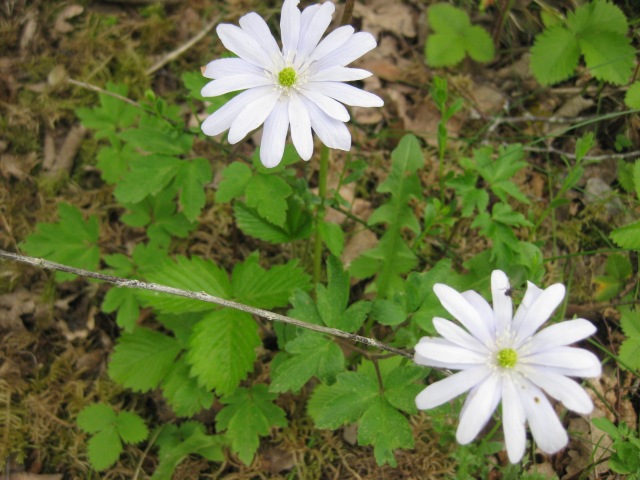 The pink Anemone hortensis is the parent of all our modern hybrids. 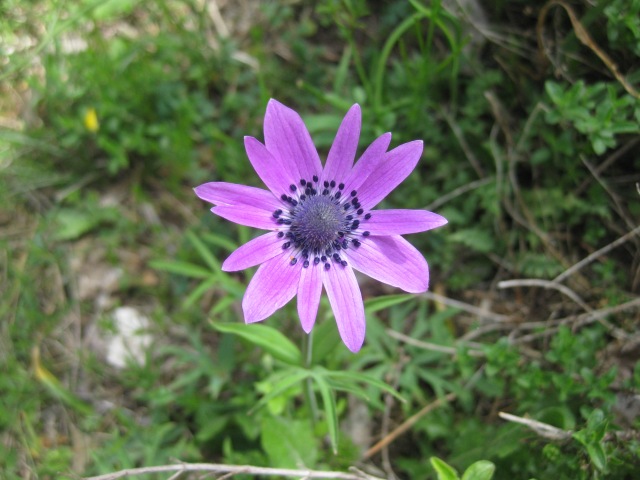 Narcissus poeticus looked daintier and more delicate than cultivated ones. There were pink Cyclamen repandum and a few lingering Corydalis solida. I read that you can find Paeonia mascula in the forest but I had to wait  until I got home to see this in my own garden.

There are rugged  cliffs and wonderful beaches . 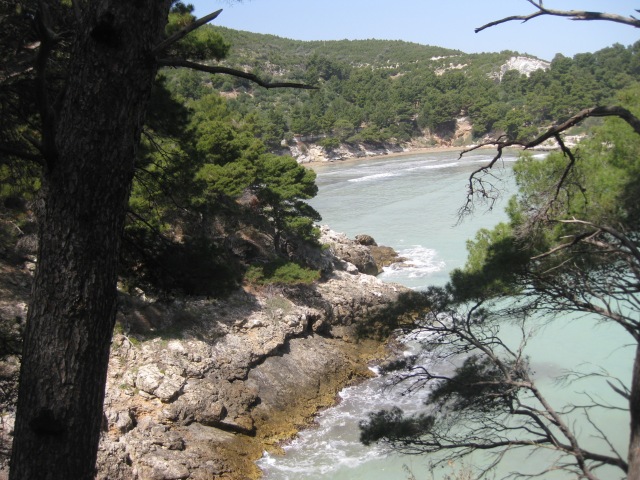 There are limestone uplands which have been carefully terraced  and have never been contaminated by modern farming and pesticides.

At first sight it looks a bit barren rather like the Burren but there are meadows which dazzle with the abundance of wild flowers.

And in the meadows you have the sound of cow bells from these nice Podolica cows which despite their large horns are not scary at all.

And neither is this little chap.

And then there are wonderful birds and what a joy to have our own well- equipped ornithologist to identify them all and give us glimpses of them. I have never seen Golden Orioles before and heard the liquid notes of their song. Thank you Richard.

The butterflies, insects and reptiles were abundant too. 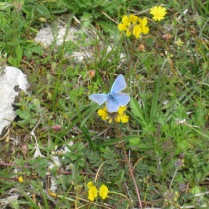 Amongst all the abundance of flowers we were particularly excited by the orchids. Here is Christina getting up close and intimate with them.

Christina is surrounded by a sea of Green Winged orchids, Anacamptis morio which at first glance looks like our native Early Purple but the flowers have stripey hoods.

It comes in white and pink too. 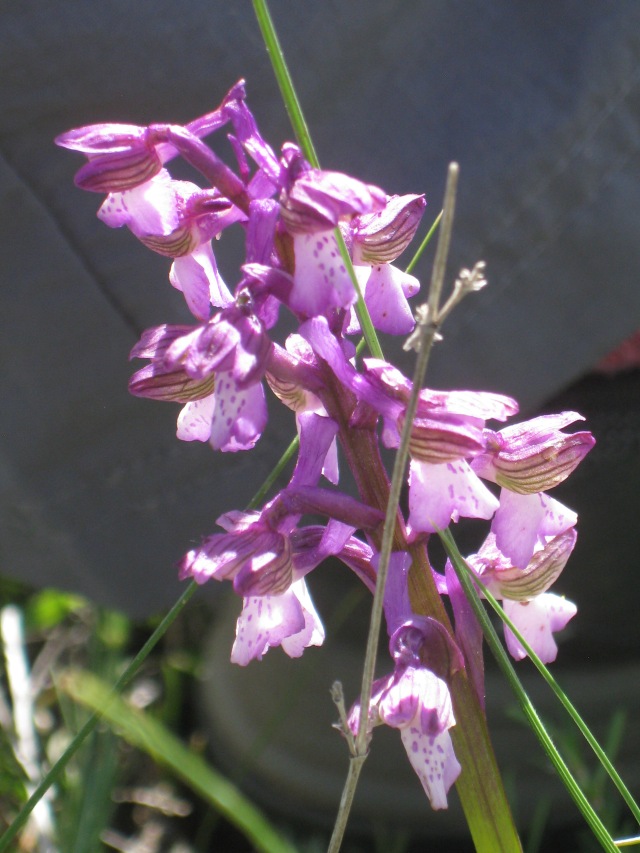 Or maybe Christina has spotted the Man Orchid, Orchis anthropophora which looks as if it has little men dangling from each flower.

Or perhaps she is examining Orchis italica, the anatomically detailed Naked Man Orchid .

We also saw the huge Orchis purpurea, the Lady Orchid but she is decently clad in a frock.

The Four-Spotted Orchid was everywhere too. This orchid is found mostly in southern Italy

The beautiful Pink Butterfly Orchid, Anacamptis papilionacea was everywhere in great abundance, the colour varies rather a lot. 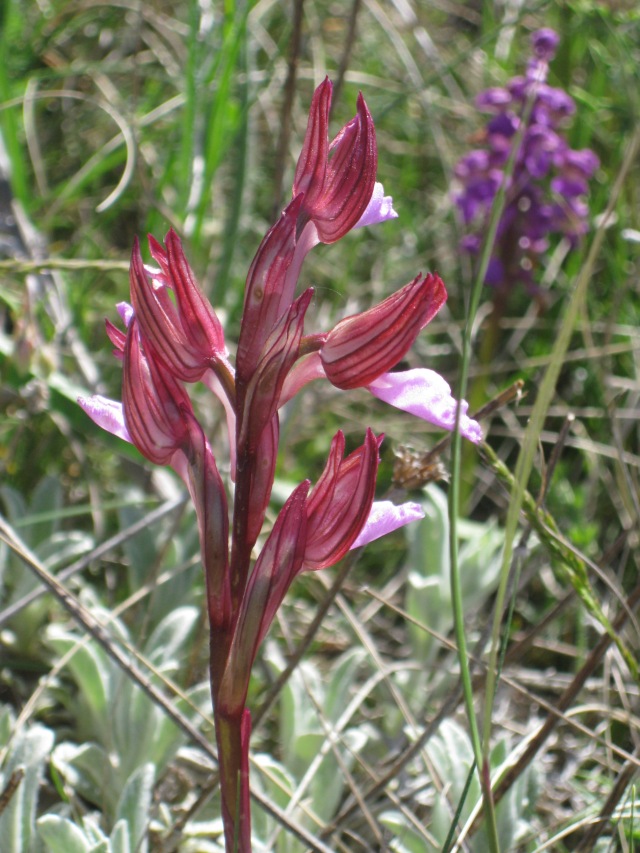 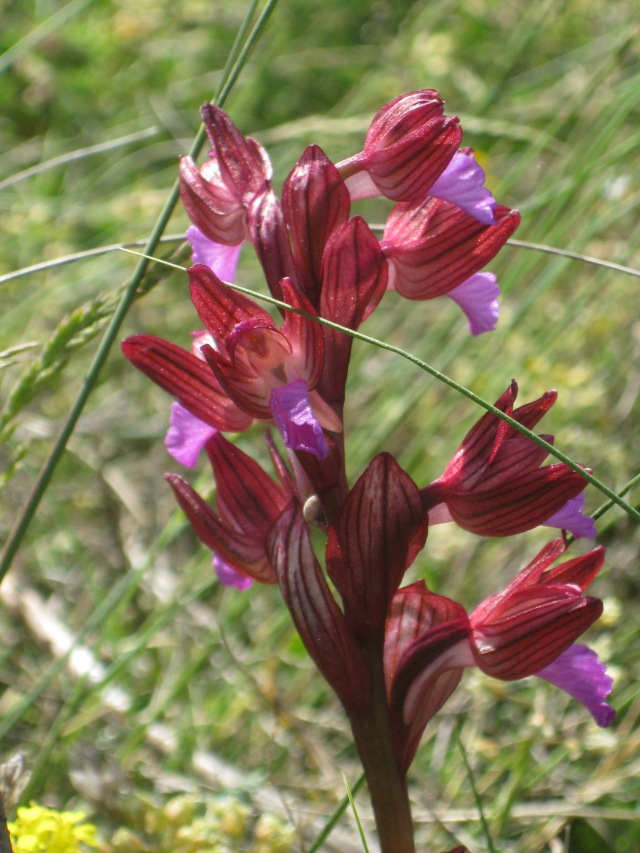 I have always thought that orchids in the Ophrys family were all bee orchids because they imitate bees to attract pollinators.

But this next one is pollinated by sawflies. 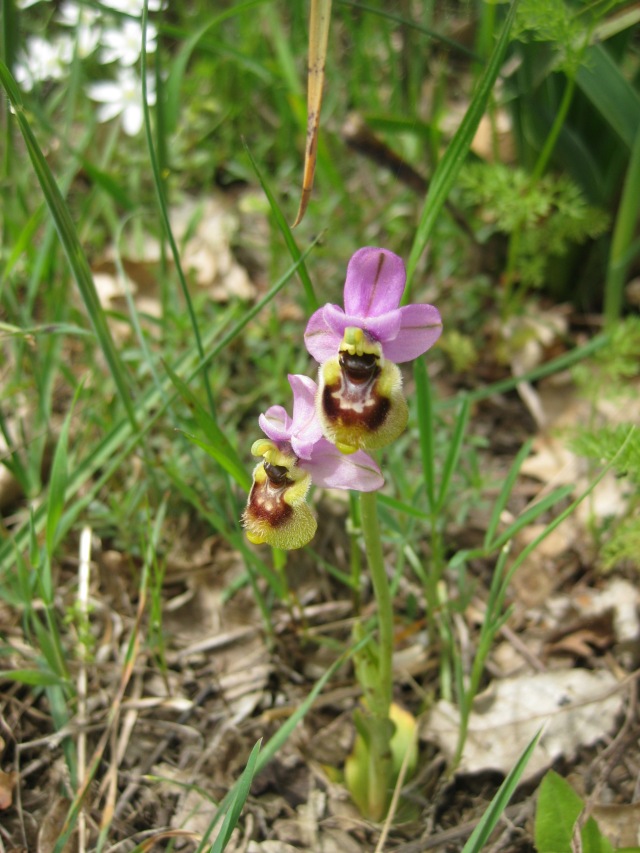 There are so many different ones. Some of them are clearly hybrids. 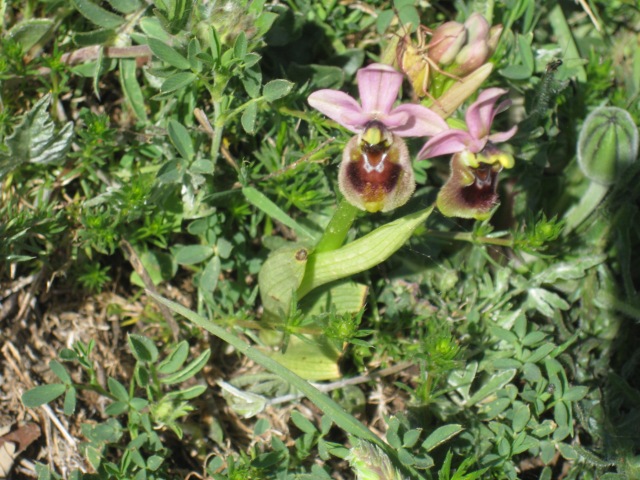 Some of them like this next one are fertilised by spiders. 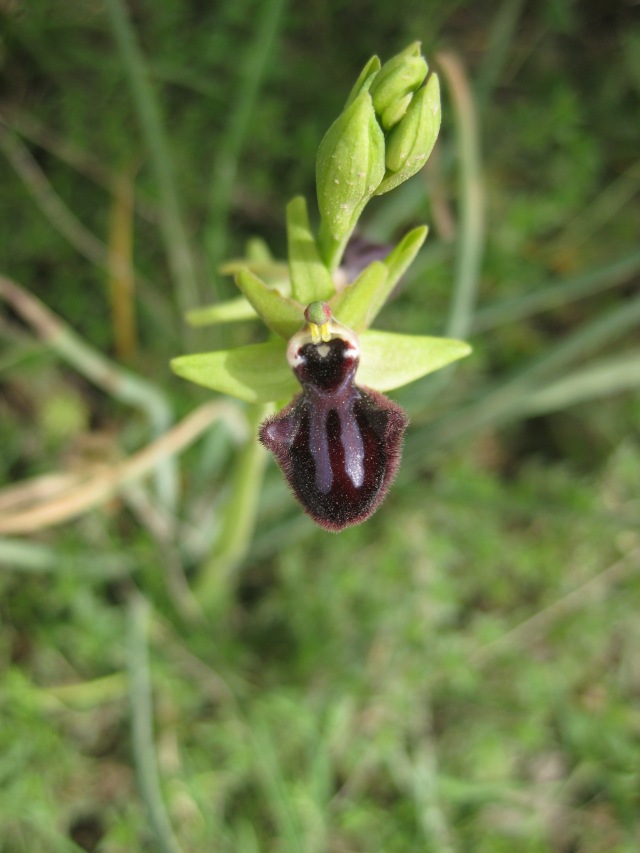 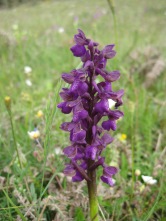 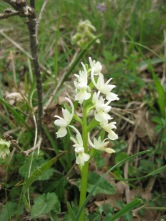 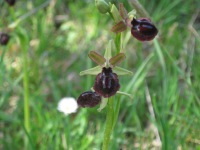 When we were not drooling over orchids we were dazzled by the number of wild irises, in places there were whole meadows of them, in shades of purple, lilac, blue, white and yellow, each more exquisite than than the last. Iris bicapitata with two heads to a stem is endemic in this area. There are also Iris pseudopumila and Iris lutescens. 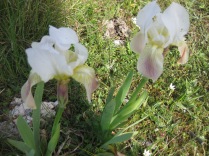 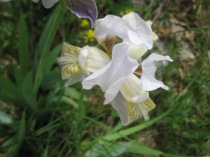 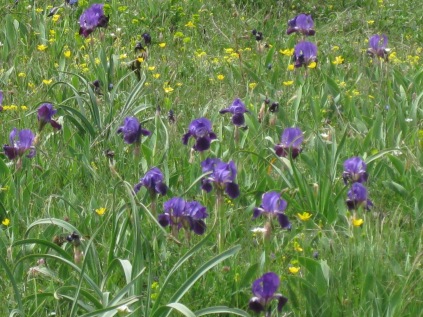 The slopes of Monte Sant’Angelo are studded with blooms. There is a sanctuary on top which has attracted pilgrims since the time of the crusaders. St. Michael is supposed to have made his last appearance here in a cave, which as the Pianist says is a funny place to play your farewell gig. I am not very well up on Catholic hagiography but I believe St. Michael is an archangel rather than the usual sort of saint who suffered a gruesome death.

I found a dead nettle growing on the wall here which is special to the Gargano. It is called Lamium garganicum. 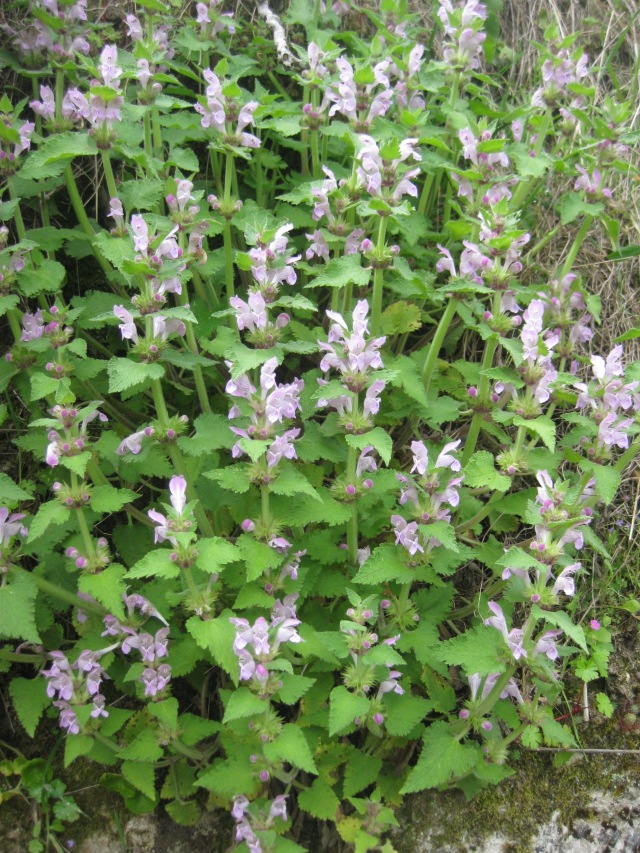 The Gargano did not seem very scary, we did see a wolf slinking through the forest but that was rather exciting. Christina nearly stepped on a very long adder but she was very calm about it and Richard likes snakes and was delighted to see it. These Pine Processionary caterpillars, Thaumetopoea pityocampa looked nasty, they are not to be messed about with, those hairy bits can be dangerous.

But the most dangerous thing about Southern Italy is dicing with death on the roads with the local drivers who never use their indicators and like playing dodgems on the motorway. But we are home now, safe and sound with lovely  flowery memories. 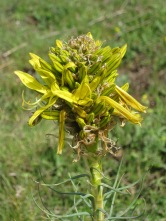 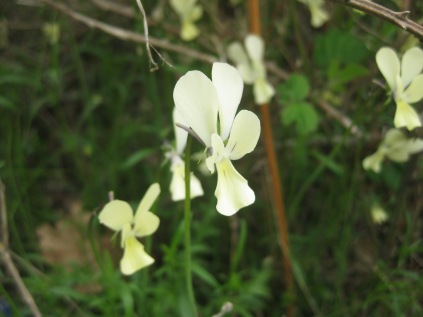 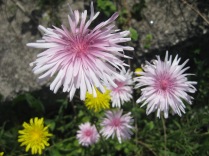 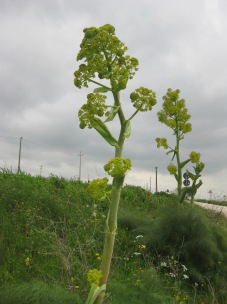 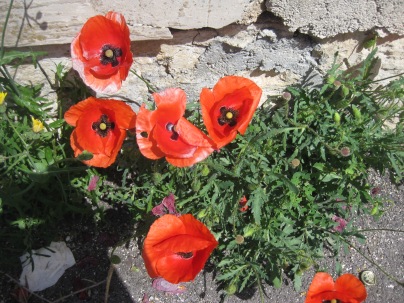 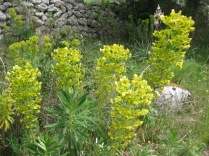 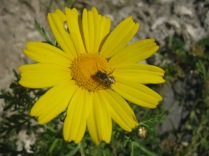 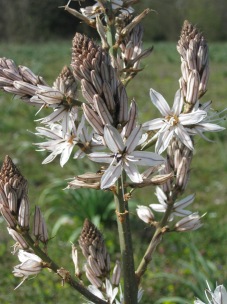 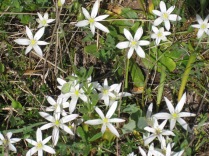 The best part of our Italian adventure was spending time with Christina and Richard. Christina is posting her story this morning too. Please go and visit her blog. Her photos are absolutely stunning.

57 Responses to Wild Flowers of the Gargano.