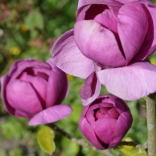 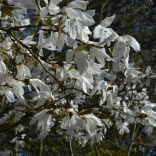 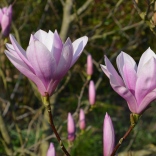 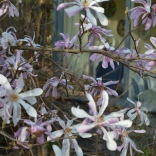 Really, magnolias should be at number one on my Top Ten April Blooms list because I am crazy about them, but I have been enjoying these six for a couple of weeks now and it is time to celebrate them before they go over. Besides, I want to join in with the popular meme, Six on Saturday.

In my previous garden I had twenty three mature magnolias planted by the previous owner who had a nursery there. Every one had their lower branches pegged down into the soil so that they would put down roots and that is the most reliable and easiest way to propagate them. I did trying growing one from seed and after seven years wait the flowers were small and disappointing.

Our present garden didn’t have one single magnolia when we came eight and a half years ago, but you can be sure it has now. At the last count there were eleven. I have heard complaints about the brevity of time of their blooming but if you plan them carefully you can have a succession of blooms for weeks.

Magnolia soulangeana is one which you see in every garden, but not in mine, so I don’t include it in my six. It is beautiful but it takes up a lot of room and anyway it takes a few years to produce flowers and there are other varieties which I think are more interesting. Its early flowers are often ruined by frost. The ones round here are all looking brown and frost damaged now. In any case it takes many years to look as good as this one. 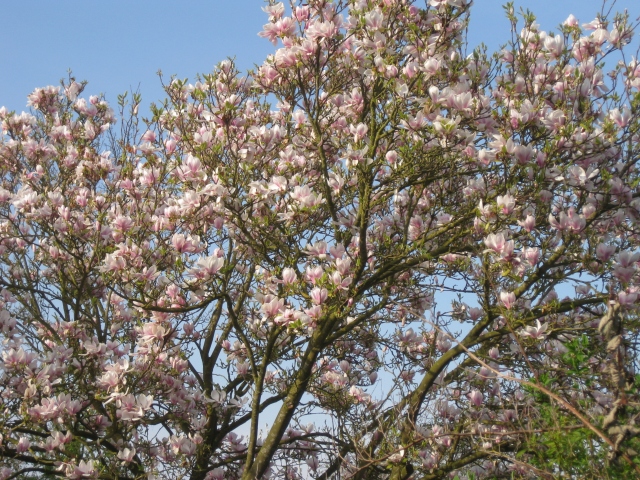 The first magnolia into bloom in my garden is glorious ‘Leonard Messel’ with fluttery, tattery, pink petals. I planted this tree seven years ago and it already looks wonderful. ‘Leonard Messel’ blooms when very young and the flowers though early seem to be reasonably frost resistant. 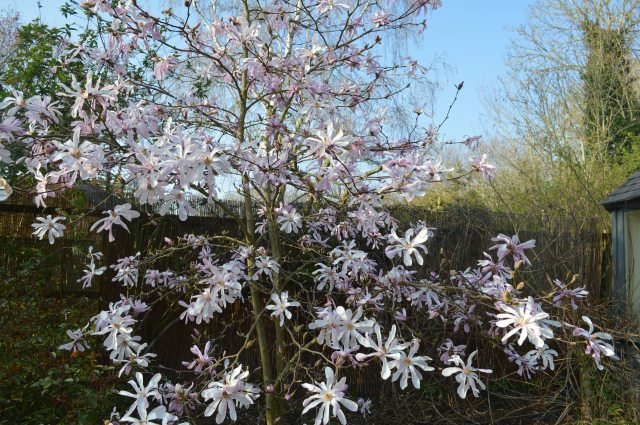 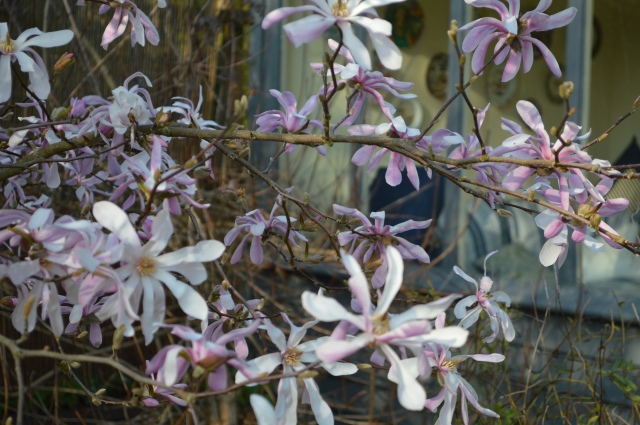 ‘Leonard Messel’ was bred from the starry flowered Magnolia stellata which I also have. This  is a slow growing tree or bush which grows to about 2.5 metres so it is suitable for a small garden. Mine is a standard. 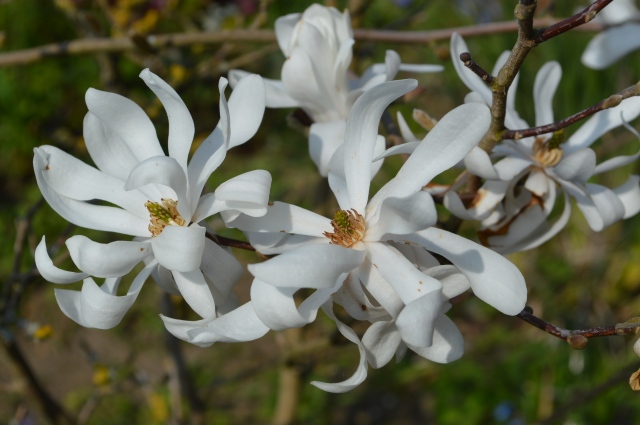 I have already shown buds of my dark Magnolia ‘Black Tulip’. The flowers remind me more of water lilies  rather than tulips. They are luscious  deep pink goblets.  I was worried the frost would damage them but they have survived quite a few frosty nights unscathed. 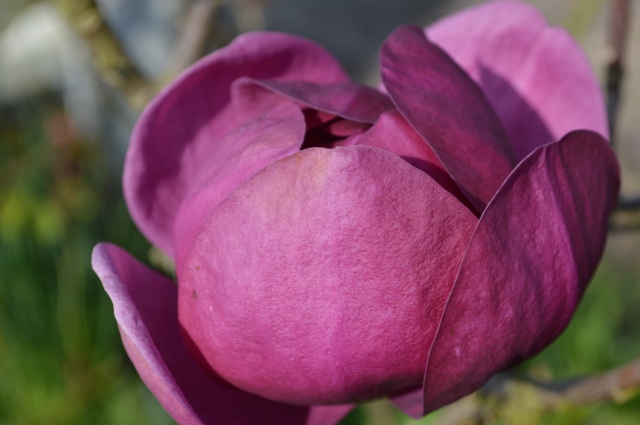 My latest purchase is a white flowered one called ‘Wada’s Memory’. The flowers hang limply like pure white handkerchiefs or white doves if you have a more romantic turn of mind. I saw a mature one in the arboretum at East Bergholt  last year and I had to have one. It grows to about 4 metres and makes a pyramidical shape which is covered in bloom. It is fast growing and blooms freely when young. 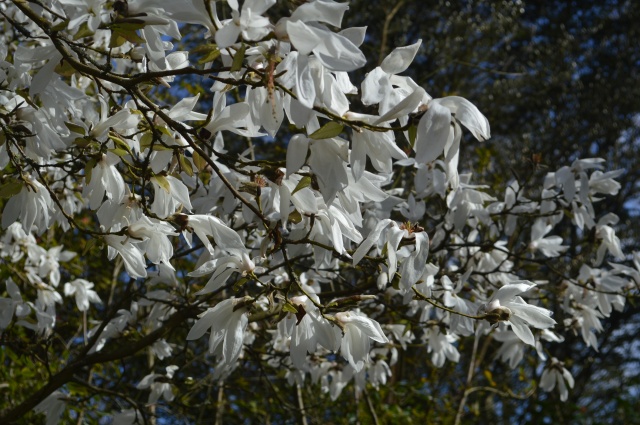 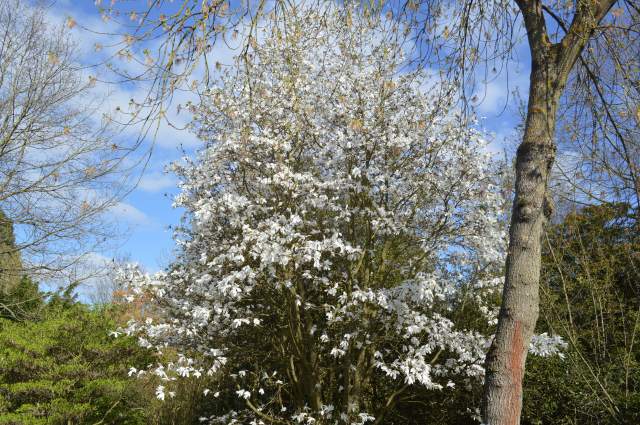 Mine will take some years to reach this height but never mind, here it is, it looks lovely right now. 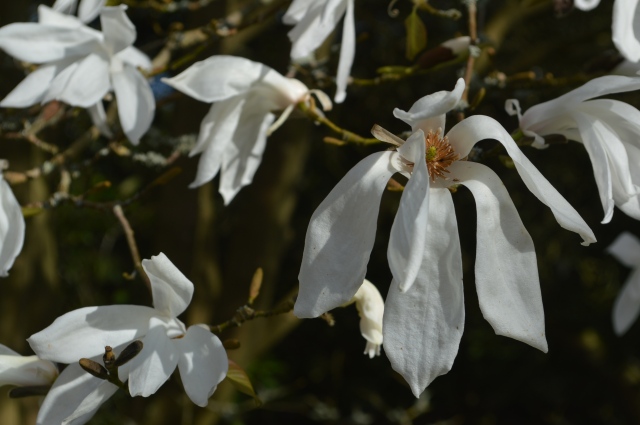 I wish I had brought rooted cuttings of all my magnolias but I did bring a piece of one of them, Magnolia lilifora ‘Nigra’ and it is now a nice little tree. It is quite late flowering and has really dark flowers, not black as the name suggests but very dark pink. 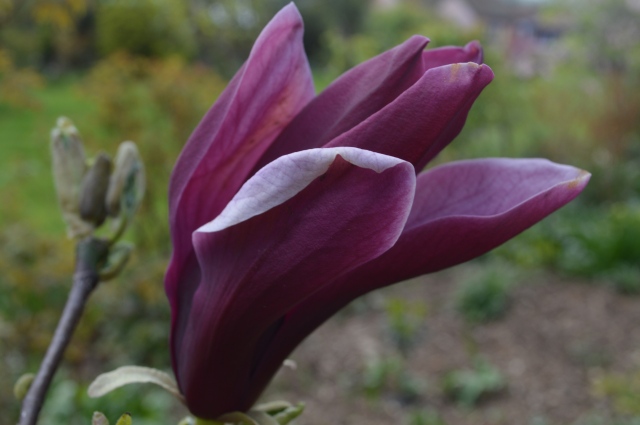 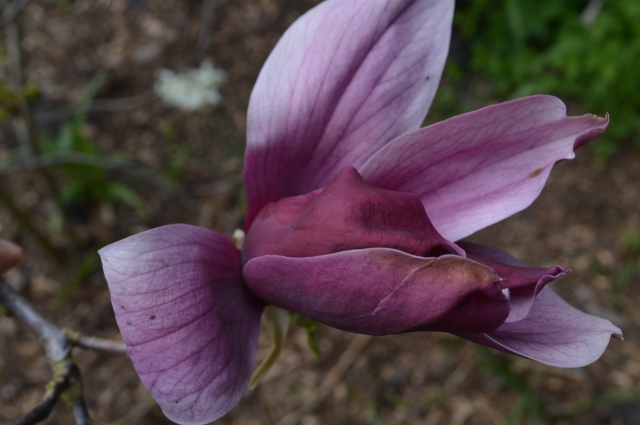 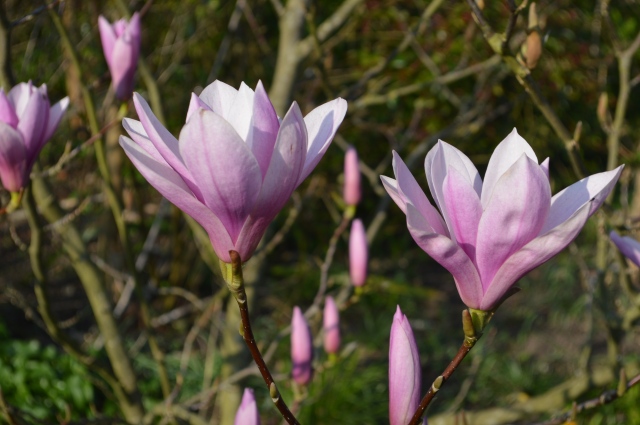 Like many wonderful magnolias it was bred in New Zealand and was given its name because the tepals point in all directions. One parent was Magnolia campbellii which has the most enormous flowers, but in the UK it is generally only found in Cornwall because it is very early flowering and the frosts zap the flowers. It makes a huge tree and takes many years to produce its first blooms. ‘Star Wars’ flowers are almost as big but they are produced on very young trees.

Here is my tree in its second year, 2012. I was delighted when it produced eleven flowers. 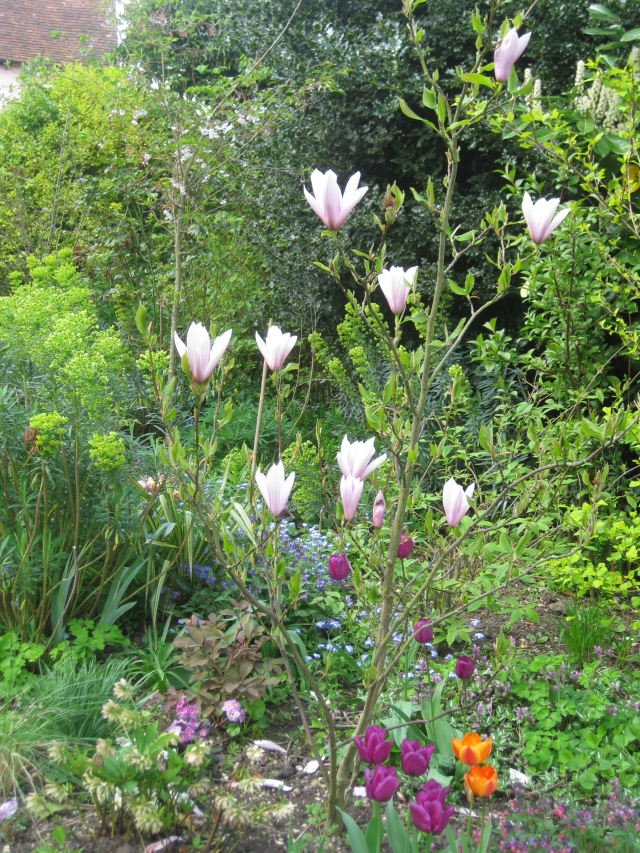 Now it is looking wonderful and I can’t even count the blooms. I don’t have a garden with a view, but here I can use a bit of borrowed landscape in the form of the ancient Cedar of Lebanon tree in the Old Rectory garden, it makes a lovely backdrop. 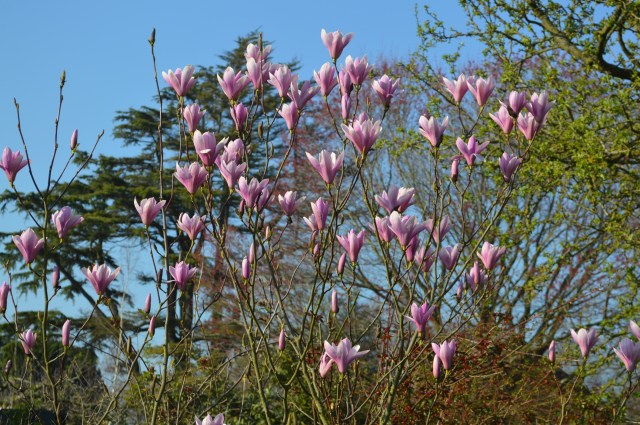 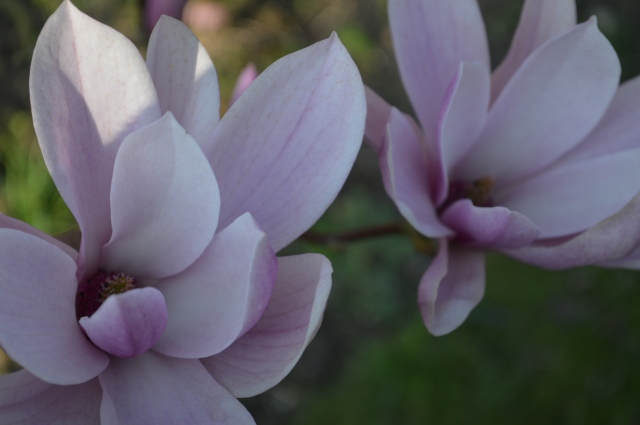 Magnolias like an acid to neutral soil and they hate root disturbance. They don’t take kindly to pruning. But really they are very easy and undemanding. After all, they have been around long, long before we were here. They were here when dinosaurs roamed the earth. In fact scientists have discovered that the very first flowers were magnolias of some sort. Can’t you just imagine a pterodactyl flying past this one in the arboretum at East Bergholt? 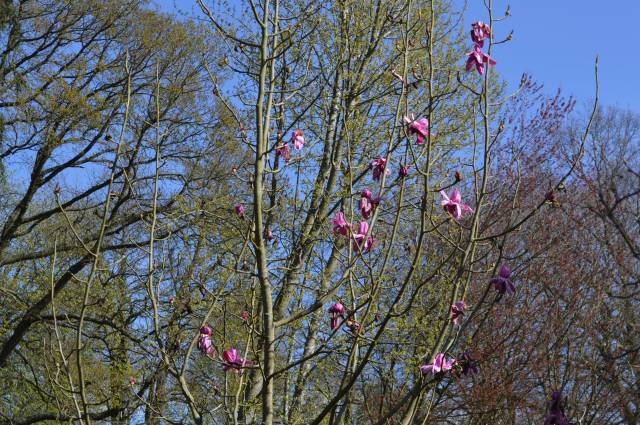 Six on Saturday is hosted by The Propagator. Do join in with the ever growing group of bloggers celebrating it.

Please join me on the 23rd April with your Top Ten April Blooms. It doesn’t have to be ten. Maybe you have four or five or just one stunning April bloom that we all should see.