We awoke to a white garden this morning. I am not a fan of a winter wonderland.  A monochrome landscape leaves me cold. Literally, even if it is a sparkly one.

My poor hellebores and snowdrops are lying face down in the snow. I can’t get on with want I wanted to do. The visit of a very special garden friend had to be cancelled.  So I am not feeling very gruntled.

But the spidery flowers of Witch hazels are quite unfazed by the ice crystals decorating their branches. 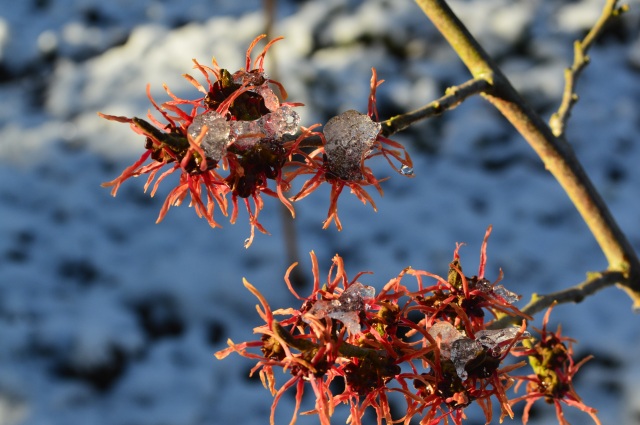 And the cinnamon strips of flaking bark on Prunus serrula shine in the sun.

In the churchyard the sun has melted the snow and swathes of Galanthus nivalis are dancing round the ancient gravestones. This form is not a bit like the form in my garden which has smaller flowers and is still in bud. Some of the best displays of snowdrops can be found in ancient graveyards like this.

But really after a brisk walk the only place for a disgruntled gardener is the greenhouse. Because despite an icy scene outside, spring has arrived in there. My greenhouse is really delighting me at the moment. So a greenhouse post  will be coming up very soon.