One of the joys of winter is the black tracery of the branches of naked trees against a violet sky. But for the garden I wanted something more colourful. The muted palette of the winter countryside has its charm but I need a bit of pizzazz to help me through the long winter days.With our fickle climate we have to seize our horticultural pleasures where we can. I first made a winter garden twenty years ago after being bowled over by the one at Cambridge Botanical Garden. It is fun to do, it makes you look at shrubs and trees with new eyes as you assess how they will look in winter, either as foliage or bark.

Four years ago I started to create one here although on a smaller scale. I wrote about it on my blog. This is what it looked like once the turf was removed and it was all dug over. The pile is well rotted manure from Pickles up the road. 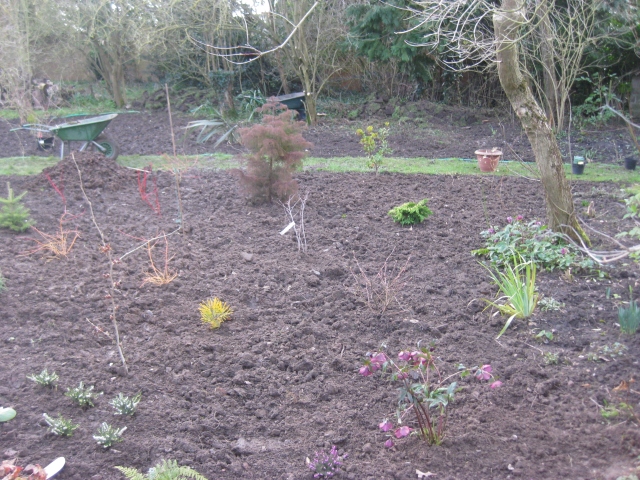 I am so pleased with how it has matured. I planted trees and shrubs with gorgeous stems and bark which form a lovely skeleton to the garden. They stand out against the shape and texture of evergreens. Many people won’t plant conifers, but a few well chosen ones are lovely in winter. I wouldn’t be without Abies koreana which has upright cones like candles along its stiff branches. This is the first year that it has had cones, I am hoping that next year they will be on all the branches. Here it is surrounded by the colourful stems of dogwood. The red one is Cornus alba ‘Baton Rouge’ and the orange one is Cornus Sanguinea ‘Midwinter Fire’. 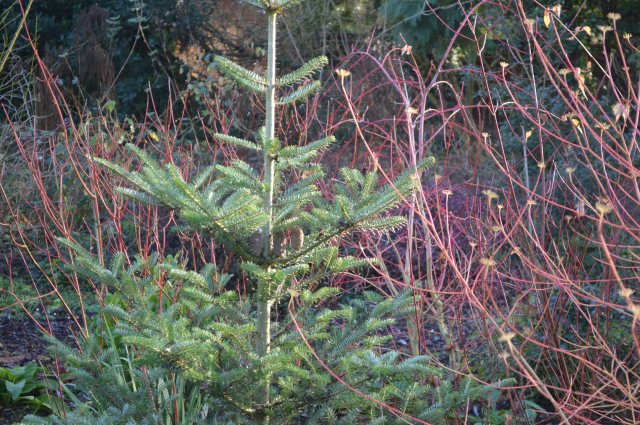 I also love Cryptomeria japonica ‘Elegans’ because it has feathery foliage which turns from green to bronzey -red in winter. 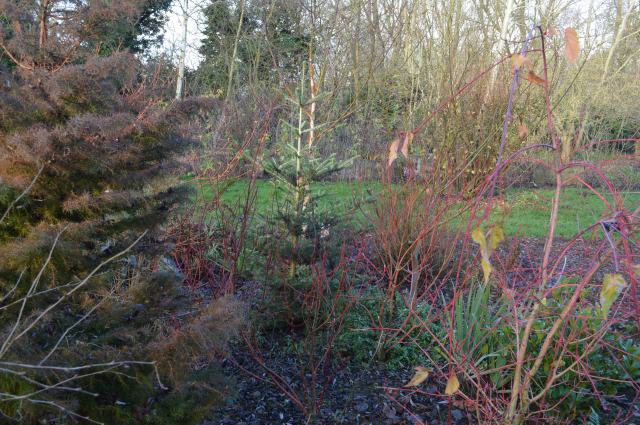 Bronze foliage of Cryptomeria japonica ‘Elegans’ on the left.

Cornus should be cut back in the spring so that the new shoots with the best colour are on show the following winter. I don’t cut back all the stems of  ‘Midwinter Fire’ because it is not such a strong grower as some of the others. But the greenish-gold  stemmed Cornus  sericea ‘Flaviramea’ is very robust and quickly recovers from its annual haircut. 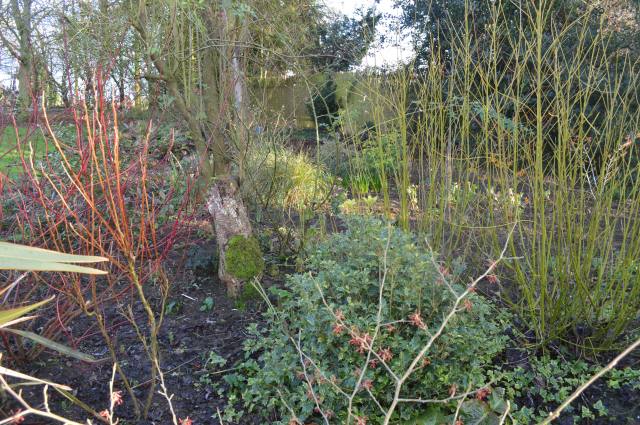 The white stemmed bramble Rubus thibetanus has a lovely ghostly appearance. It can be invasive but I control it by cutting it back each year and making sure it is not wandering about the bed. 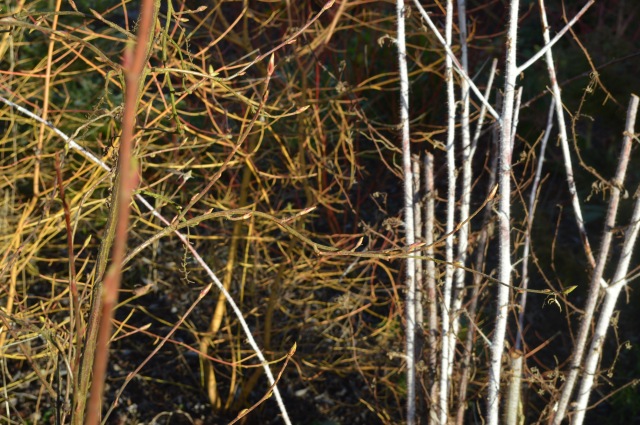 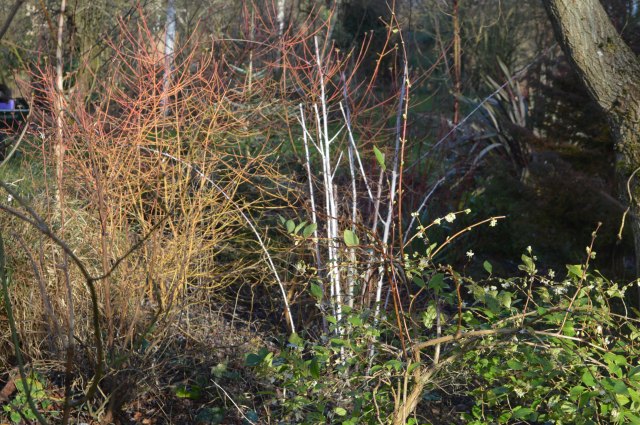 The two trees I planted already look quite mature with lovely bark.  Betula albosinensis ‘Pink Champagne’ has pink peeling bark with a white bloom. The little shrub on the left is  Cornus sericea ‘Kelseyi’, a compact dogwood with fine, lacy reddish  brown stems. 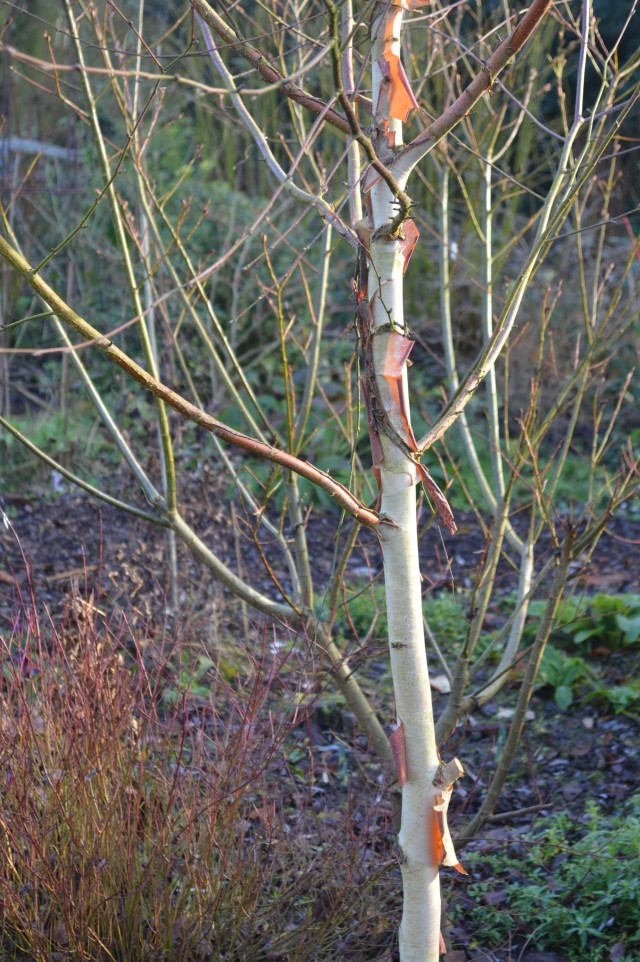 Every winter garden has to have a Tibetan cherry, Prunus serrrula because of the gorgeous shiny, cinnamon -coloured bark. 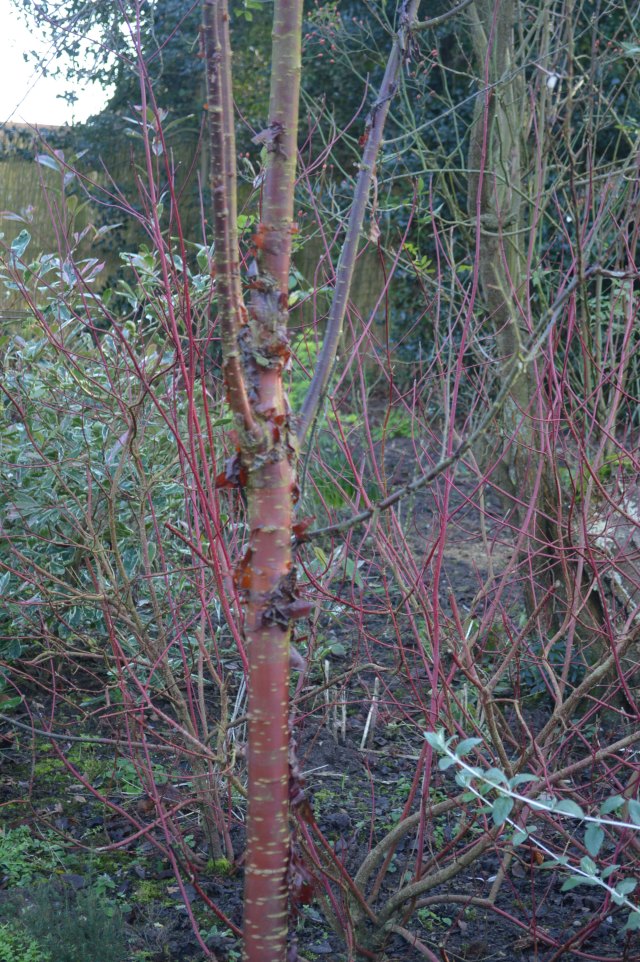 Red cornus is lovely, I have  both Cornus siberica ‘Westonbirt’ and ‘Baton Rouge’, but nothing can match acers for the reddest of red stems. 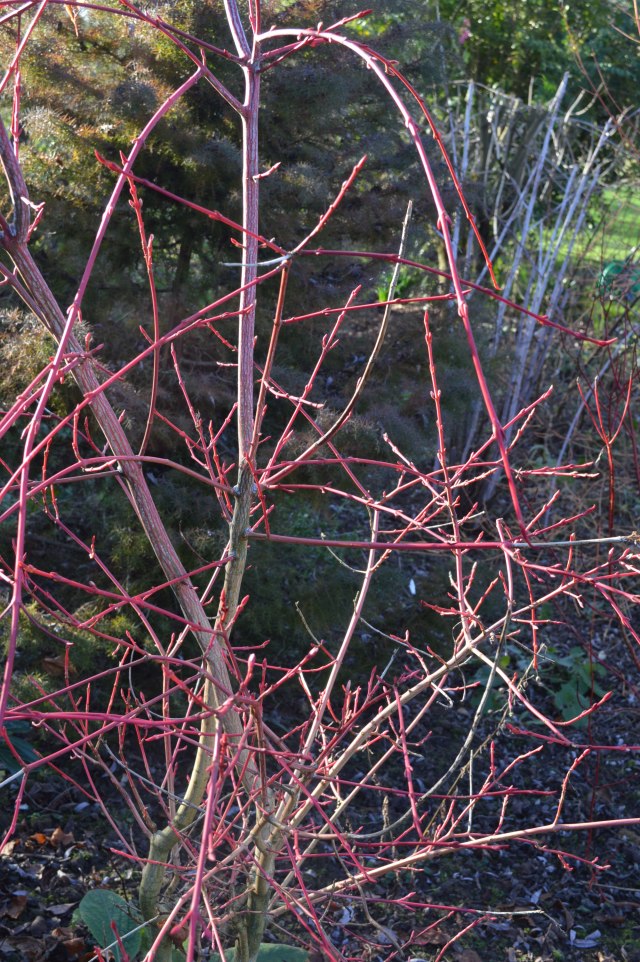 The hose in the next picture is marking out the latest bit of lawn which will soon disappear. I leave it out for a few days until I am satisfied with the shape. 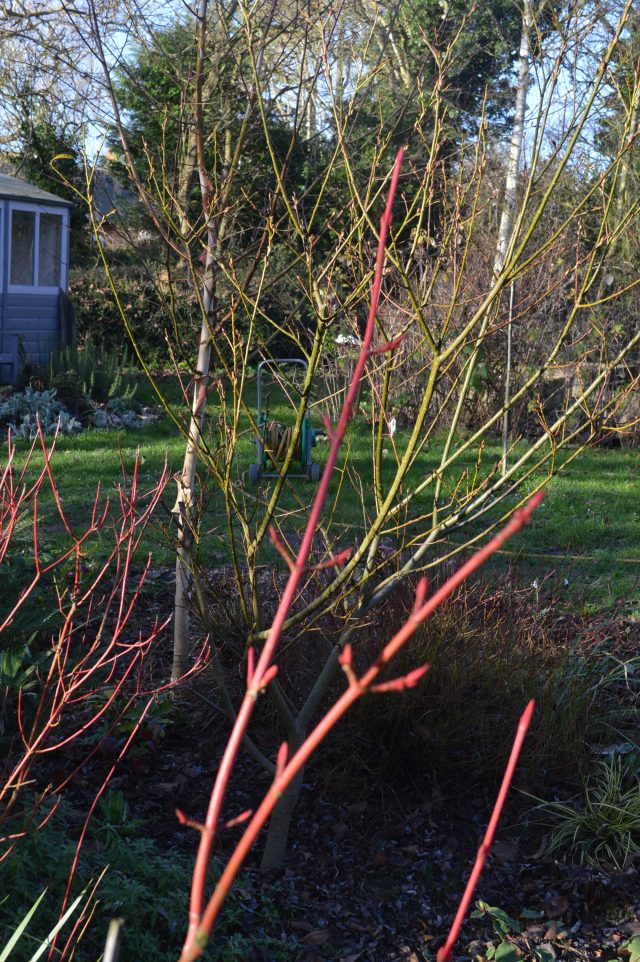 Soon I will have lovely catkins, the first ones are on the corkscrew hazel which Bowles grew in the area of his garden called the ‘lunatic asylum’. 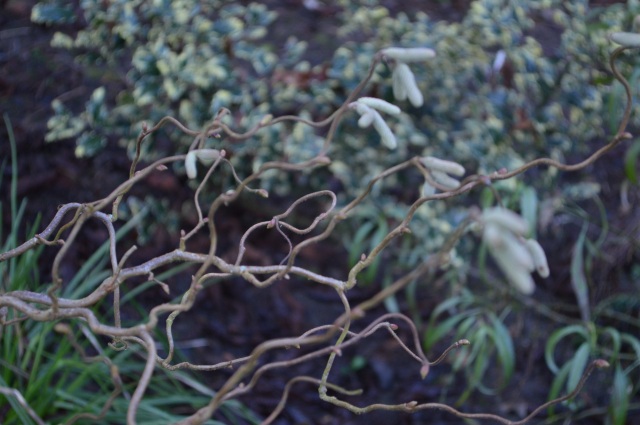 I don’t know whether Bowles knew it, but I should think Muelenbeckia astoni is also a candidate for his lunatic asylum, its crazy wire-like stems look like tangled twine. 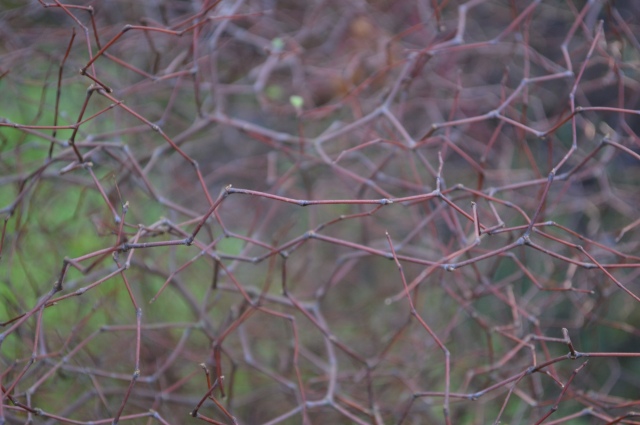 I shall probably regret planting a phormium, I once tried to dig up a mature one and it nearly killed me. Having said that I saw a bright, shocking pink one the other day and I was almost tempted. 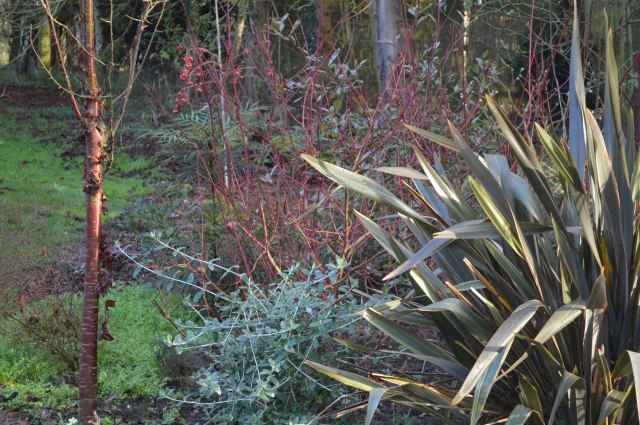 Phormium on the right.

I love the holly like foliage of  Osmanthus heterophyllus ‘Koshiki’ with its cream speckled leaves. 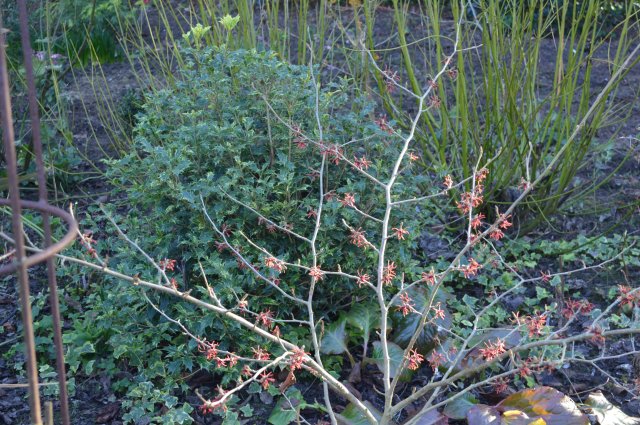 For bright foliage I have the unusual Photinia x fraseri ‘Pink Marble’. 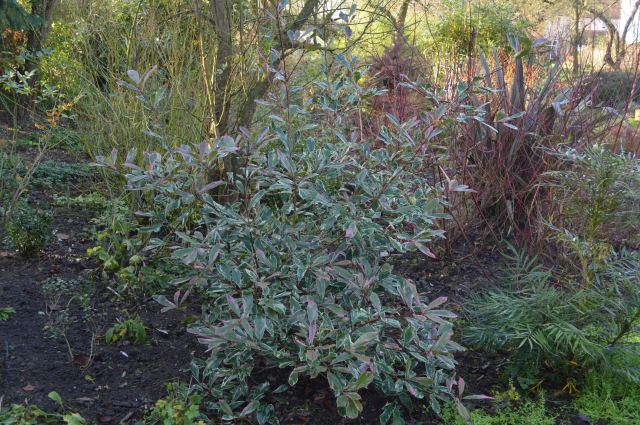 The shrub to the right is Mahonia eurbracteata ‘Soft Caress’ which makes a change from the more usual prickly one. 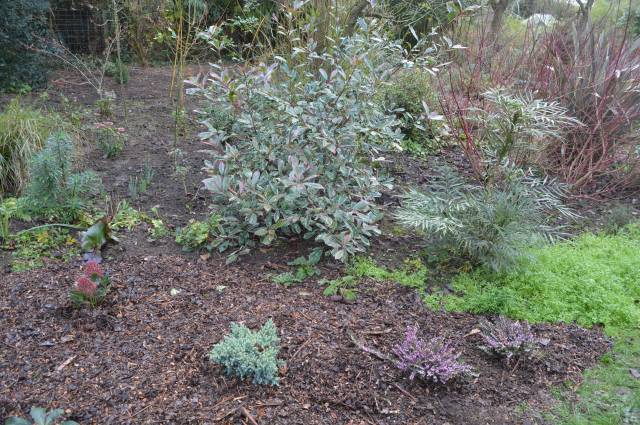 The rather bare appearance of the soil in front is where I have recently enlarged the bed. As you can see I took a nice large chunk out of the lawn and got rid of this silly curve. 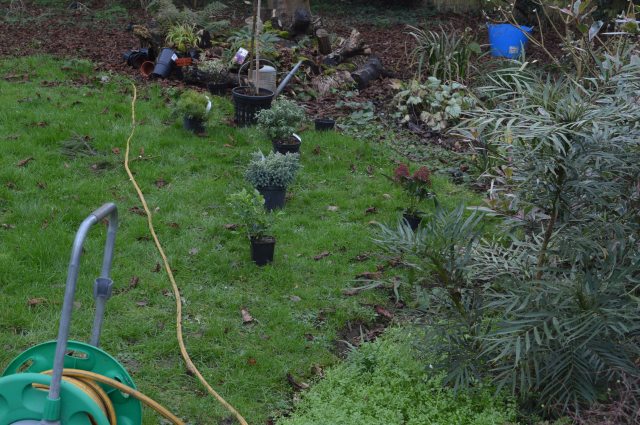 I have started the planting. To my delight I got this delightful weeping crab apple for £10.50 because it had lost its label. I think it might be ‘Red Sentinel’ and a crab apple that hangs on to its fruit into January is just what is needed here. 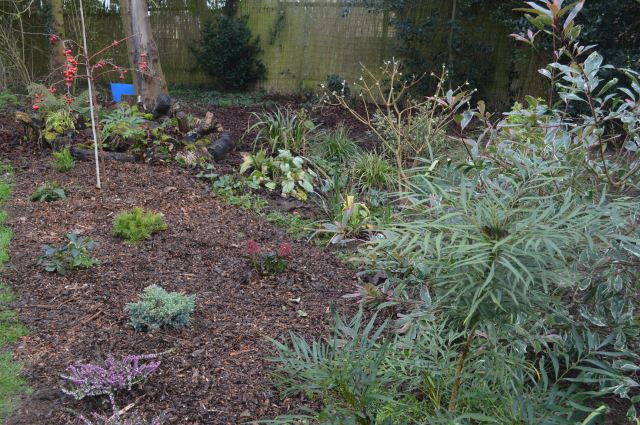 Oh but wait a minute, no sooner had I planted it then this happened. A hungry blackbird. 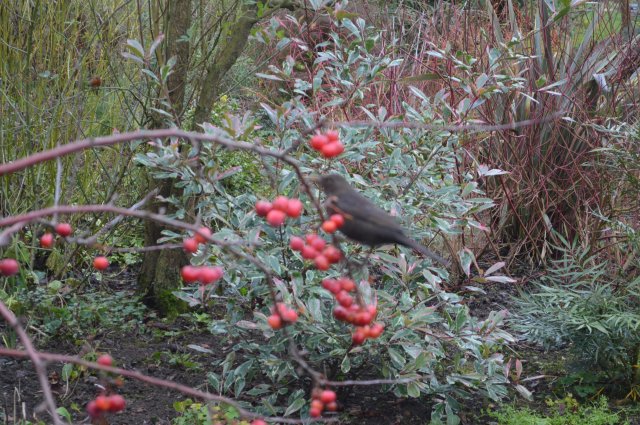 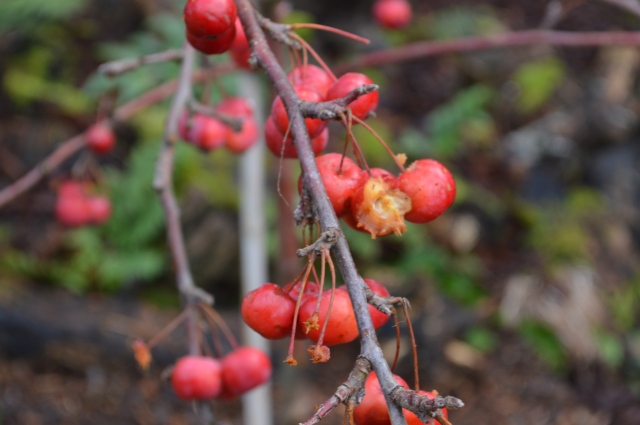 I have also enlarged the bed here to give a better shape and more room. I took a good chunk off the lawn and enclosed my special white flowered Japanese Apricot safely inside the bed away from the mad man on the lawn mower. 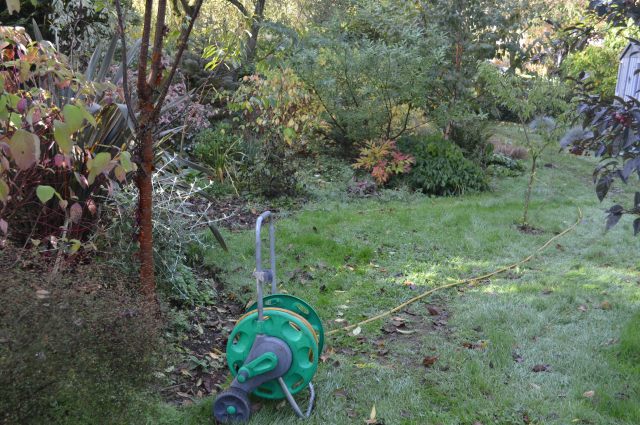 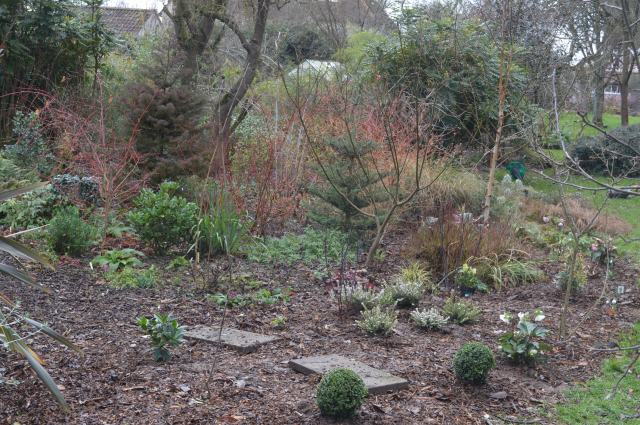 I have planted the black Cornus alba ‘Kesselringii with white heathers. 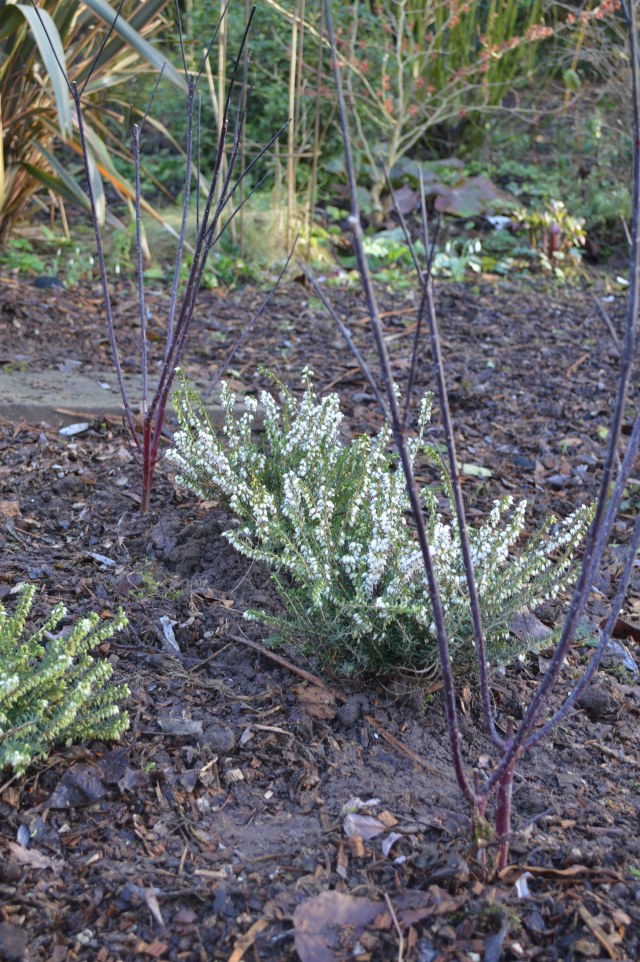 There are plenty of jewel like winter flowers already in bloom and lots more to come as we go into the spring. But they are for another post.

In June I become so besotted with roses that I want to fill the garden with them. But in the winter I become just as excited by my winter garden. And it keeps on giving for six months and  more. And look at my last grotty corner under the trees here, just waiting for me to expand into. 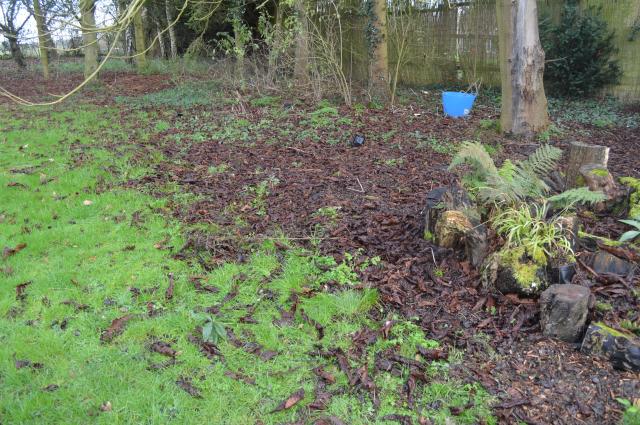 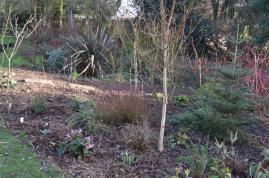 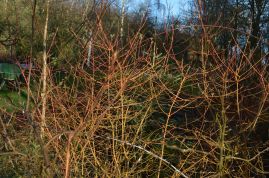 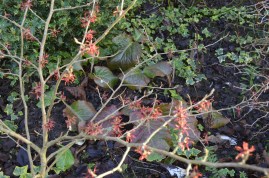 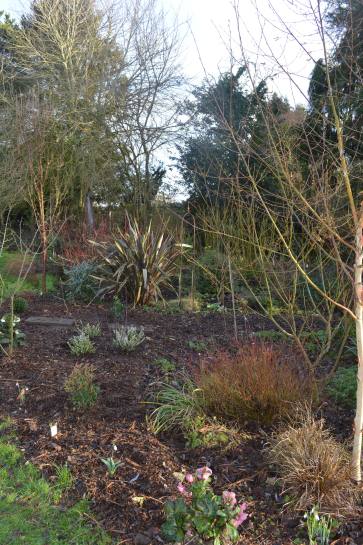 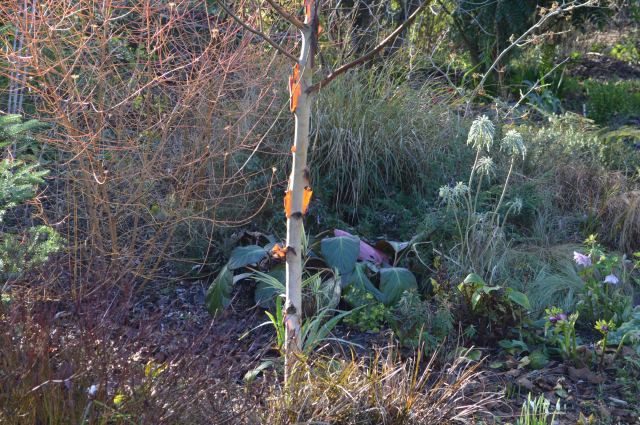 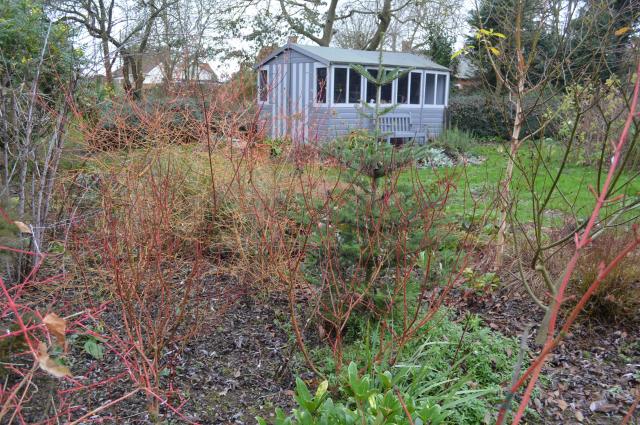