The roses are at their intoxicating best this year, can you remember them ever being as fabulous as they are right now? Perhaps it’s all the early spring rain or maybe they are always this beautiful but their sheer gloriousness takes us by surprise each year. 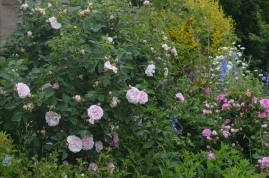 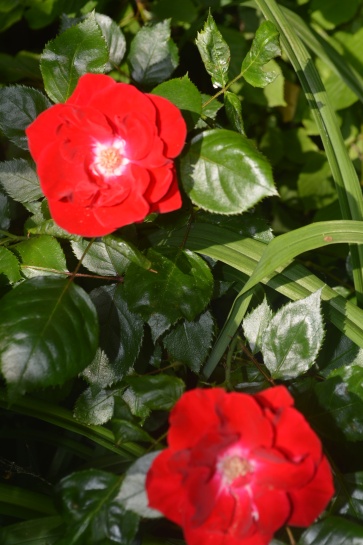 Many years ago I visited the garden, ‘Lime Kiln’, of a fanatical rosarian called Humphrey Brooke. He grew over 500 roses in a wonderful setting of 12 acres of woodland and ancient chalk pits.  Mr Brooke was very old when I visited him and his roses had grown unchecked for many years and in parts you really needed a machete to get through where paths were blocked and trees had been brought down under the sheer weight of massive roses. Mr Brooke told me that he didn’t believe in pruning, feeding or spraying. He only grew roses which were capable of thriving without aid. And thrive they did. He had the biggest Rosa filipes ‘Kiftsgate’ I have ever seen and you know how big that gets. The garden was wild and neglected, but such a magical place of enchantment and the fragrance everywhere was amazing. Mr. Brooke  told me that he had suffered all his life from bipolar disorder, then known as manic depression, but his garden and his quest to seek out lost old roses brought him great joy.  When I am a batty, old lady and too old to garden, I like the idea of giving my garden over entirely to roses  and letting them climb and meander everywhere enclosing the whole place in fragrance.

It was also about this time that I first visited Mottisfont Abbey and Sissinghurt  and became truly hooked on old roses. Vita Sackville West’s delicious descriptions of old- fashioned roses utterly beguiled me. At Sissinghurst I studied her way of growing them over hazel benders so that they were igloo-shaped and covered in blooms. Religiously, every year I would renew the hazel in my rose igloos and feed and pamper and spray the roses so that I could replicate the wonderful effect.  But that was in another garden and another life; these days I am a bit more laissez-faire when it comes to training my roses. If they want to tumble about or climb trees, they are allowed to. I like them growing in an abandoned luxuriance. I feed them, but mostly I let them do what they want with just a bit of support if they need it. And hypochondriacal  prima donnas that always look sickly with black spot or rust are simply evicted. Of course you never get rid of black spot entirely but as the famous rosarian Jack Harkness once said:’What’s a bit of black spot between friends?’ Actually, I once read that Christopher Lloyd claimed to have totally eliminated blackspot by having a three -inch layer of grass cuttings round each rose. This makes sense as the spores lie around on the ground.

Sometimes roses that are left to their own devices surprise you by climbing when they are not supposed to climb. Lovely ‘Grace’ is climbing up an apple tree and today I just noticed ‘Gentle Hermione’  at the top of a holly tree where she had no business to be, but good for her.

Of course all roses are lovely, but I don’t much care for Rosa rugosa hybrids. Even though they are always nice and healthy with glossy leaves I cannot love them. With a few exceptions I eschew Hybrid teas and floribundas.  Old-fashioned roses make you swoon with their wonderful scent and beautifully shaped flowers. But like everyone else, these days I grow a lot of David Austin rose because they have all the charm and fragrance of old -fashioned roses and come in gorgeous colours. 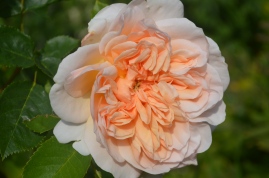 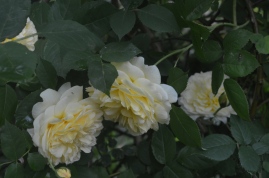 Much as I love the sumptuous double blooms of old fashioned roses, I also love single roses and of course the bees do too.

My favourite single climber is Rosa cooperi which has enormous snowy white flowers and healthy foliage. It is said to be a bit tender and it needs a south facing position. I grew mine from a cutting and it has taken off beautifully.

I have two single China roses which are not supposed to be totally hardy but I never have any problem with them. The first is the glorious Rosa mutabilis which changes colour from honey to orange to pink.

The other Rosa chinensis which blooms right up until November is the cherry red ‘Bengal Beauty’. I love this one. It looks good against the dark leaves of Cotinus coggyria.

But for pure health and vigour in a single rose you can’t beat the modern shrub rose ‘Sally Homes’. And she flowers on and on. 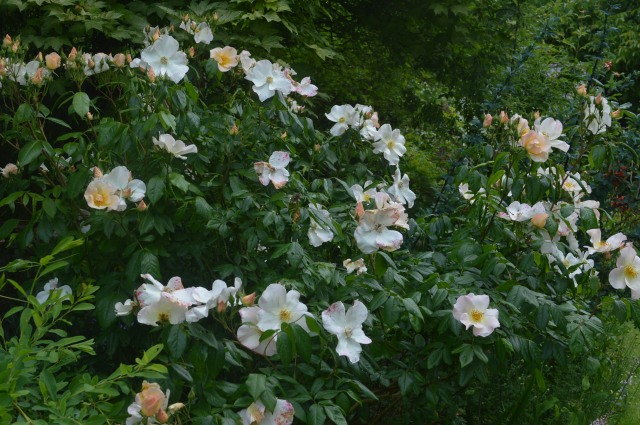 Some of my ramblers are still to bloom. I showed lovely ‘Phyllis Bide’ in my secret garden in a recent post. The multiflora rambler Veilchenblau’ is just coming  into bloom in the weeping pear.

Last year I bought ‘Goldfinch’ because it is one I didn’t want to be without. This one was a great favourite of Vita Sackville West. She called it her pet and her darling. And you can see why, it is a combination of egg yolk and honey and has a delicious fragrance.

I have not bought the monster Rosa filipes ‘Kiftsgate’for this garden but I did bring a seedling from my previous garden which clearly has filipes blood in its veins, it is trying to take over every tree in its path.
I have another beautiful but vigorous rose with Rosa filipes ‘Kiftsgate’ in its heritage. It is the lovely ‘Treasure Trove’. I first saw it in my friend Anne’s garden. But Anne is a master pruner and her rose is beautifully trained and doing exactly what its told and looks superb. Mine has very quickly reached the top of its tree and goodness knows where it will head next. But it is so pretty.

One of my prettiest ramblers is one which I fell in love with in Humphrey Brooke’s garden all those years ago. It is ‘Paul’s Himalayan Musk’. It grows absolutely enormous, to about 30 feet and although half of the plum tree it is climbing sheered off in the gales last winter, it is quite unconcerned and has decided to head for a nearby apple tree. 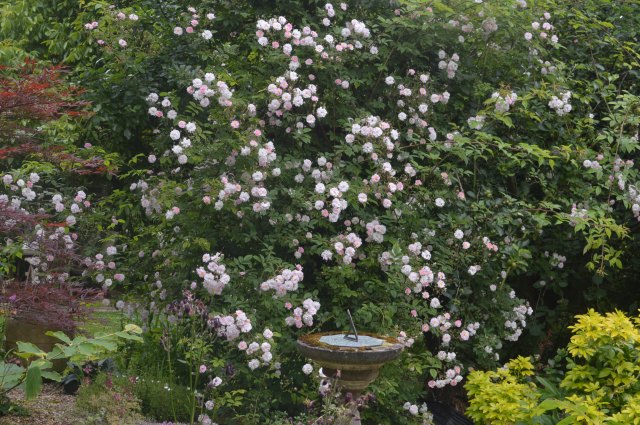 Climbers aren’t so territorial and so are better for growing up walls. Pale pink Rosa ‘New Dawn’ is an old favourite from 1930. It is healthy, repeat -flowering and easy from cuttings. I have it growing on the front of my house.

Another healthy rose is the German -born  ‘Karlsruhe’.(1957)  It is a deep pink and  has healthy foliage and a lovely scent. It looks good growing up a yew tree.

Ok you are getting rose indigestion so I will just mention two more climbers.
Zepherine Drouhin is thornless and has a superb perfume. It is a Bourbon though and like lot of its tribe, it can suffer badly from black spot but I forgive it because it is so lovely. 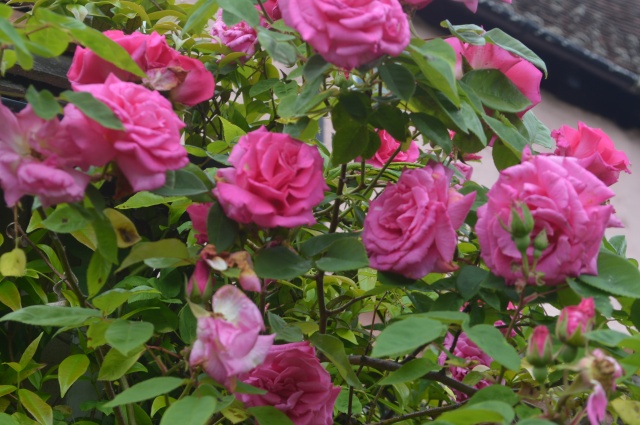 And just one more, ‘Lady Hillingdon’ is a real aristocrat and although she hangs her head languorously, you forgive her because the apricot colour and the fragrance are superb.

So there we have some of my current favourite roses, but there are plenty more for another day.

50 Responses to Everything’s Coming Up Roses.

Garden visiting, looking at what is through the garden gate, especially those open for National Garden Scheme, with just an occasional foray here and there.