The stygian darkness of so many January days is considerably brightened by a few  very special winter blooms.  The shrubs which give particular pleasure are  fragrant  so that they will attract any bees brave enough to be about. Daphnes are  the most sweetly-scented delights in January. We even have a native one with yellow flowers which although not showy seeds about obligingly in my garden and is happy in deepest shade. It is only lightly fragrant but bees like it. I like it for its glossy leaves. I wouldn’t go as far as to buy it, but when it pops up I am happy to see it. It is Daphne laureola.

In another garden I used to have a beautiful yellow- flowered daphne called Daphne pontica. I have never come across it again and daphnes die if you move them so I had to leave it behind. If you come across it, believe me it is a lovely plant. I love the whole daphne tribe but they are capricious things and offer suffer from sudden death for no apparent reason.
Daphne odora ‘Aureomarginata’ smells divine but the flowers peep out from behind the leaves and it is not as showy as the peerless Daphne bhluoa ‘Jaqueline Postill’. I know I am always singing her praises but she is stunning right now and the scent is intoxicating. 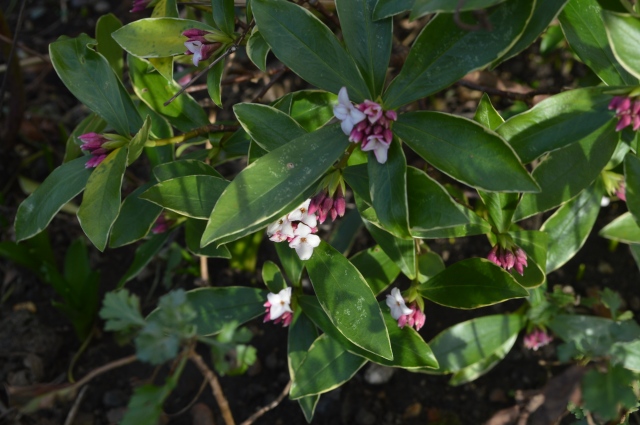 Another intensely fragrant plant is the Sarcococca. My favourite is Sarcococca hookeriana var. digyna. It suckers around and makes a nice spreading shrub which smells wonderful.

Sarcococcas need to grow in semi shade. I would like a hedge of it or maybe plants of it all round the garden as it smells so wonderful.

Recently Cathy at ramblinginthegarden showed her wonderful collection of witch hazels. They are rather addictive, specially because they brighten up January, the dreariest of months. The best witch hazels for hardiness, large flower size and a wonderful range of colours seem to be the Hamamelis x intermedia hybrids. They are a cross between the Chinese H. mollis and the Japanese H. japonica. Witch hazels like a neutral to acid soil, unlike sarcococca which prefers neutral to alkaline soil.  I do not have acid soil but witch hazels can be kept happy as long as they are kept moist in summer. I have found to my cost that you will not get many blooms if they dry out in the crucial months when the buds are forming. So  remember, moisture in summer, but they must not be water-logged in winter.  A good annual mulch of garden compost or manure will keep them happy. It is difficult to choose a favourite, but this year I am particularly beguiled by H.’ Orange Peel’. I don’t know whether it is the power of suggestion but I think she smells of marmalade. 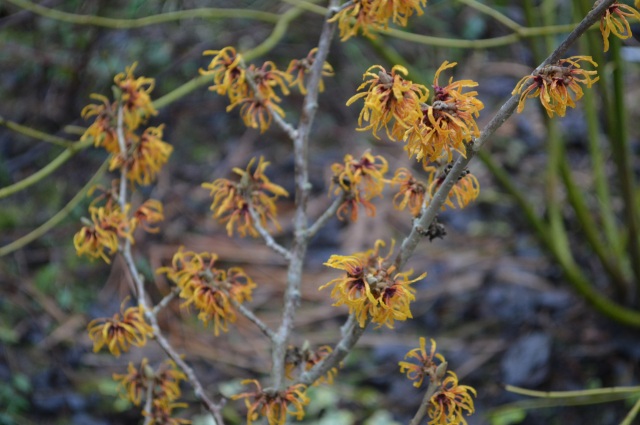 H. ‘Jelena’ is also orange but more of a coppery orange, I can’t detect any fragrance on ‘Jelena’ but it is beautiful.

H. ‘Vesna’, named after the Russian Goddess of spring is yellowy- orange and deliciously fragrant. It is also one of the best for autumn foliage.

H.’Livia’ has a good autumn foliage too. It has bright red flowers rather similar to those of ‘Diana’.

I bought a new witch hazel this week and as it didn’t have a label I got it reduced which is very satisfying because witch hazels have to be grafted and they don’t come cheap. It looks very like ‘Liva’ but then it could be ‘Diana’ I am not really sure. When I brought it home in the car the fragrance was wonderful, which is often the way with witch hazels, somehow they don’t smell so strongly in the open air. Perhaps they need warmth to bring out the fragrance.

Does anyone recognise it? It could even be ‘Rubin’ which is the only red witch hazel to win an AGM. Yesterday, the sun came out and it looked amazing with the sun shining on the blooms. Actually, not only did the sun come out yesterday, but birds  started singing. Today we are back to gloom and the birds have very sensibly decided to save their voices.

I know some people think that witch hazels should be yellow and anything else is an aberration. I like yellow ones too and for some reason they are always later coming in to bloom in my garden, so I will save them for February and now let’s move on to the next smelly shrub and that is a winter-flowering honeysuckle called Lonicera ‘Elisae’. For some reason this one remains quite rare. It is much more beautiful than other winter flowering honeysuckles and makes a nice compact shrub with large tubular flowers which are flushed with pink. Roy Lancaster introduced it in from China in 1983. I’m afraid my photo doesn’t really do it justice.

My other winter obsessions are hellebores and snowdrops. These are the flowers that really come into their own in February but they are already giving pleasure in January. The snowdrop season starts in December and goes on until March and the different varieties ensure that sufferers from white fever always have something to croon over.

I know that to many gardeners a snowdrop is a snowdrop, so I will just show you a few from the many that draw me outside on the most miserable days. Galanthus ‘Sam Arnott’ has a good sized flower and clumps up nicely. The flowers are fragrant when you bring them indoors.

G ‘Robin Hood’ has the distinctive scissor-lie markings on its inner petals.

G.’Titania’ is one of the Greatorex doubles named after Shakespearean heroines. They are all quite similar but I think this is one of the best.

I bought the next one as ‘Anglesey Abbey’ but it was clearly wrongly labelled as it has yellow ovaries. Still I am pleased with it. Perhaps it is ‘Wendy’s Gold’.

G. Diggory’ is a very distinctive snowdrop  with its puffed out flowers.

Another easily recognisable snowdrop is G. ‘Magnet’ with long its long curved pedicels  I love the way the flowers sway in the breeze. 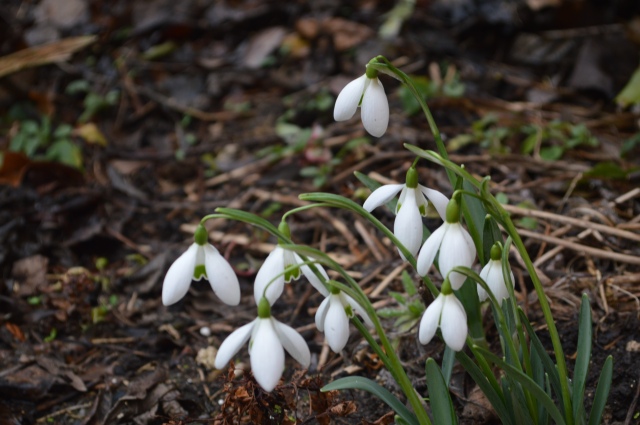 G.’Bill Bishop’ is not very tall but it has huge flowers which dangle on a long pedicel in a similar fashion to those of ‘Magnet’.

Ok, your eyes are glazing over so I will save some more snowdrops for another day. I think they should be given out in small doses as not everybody is a galanthophile. So let’s move on to primroses which are the harbingers of spring . 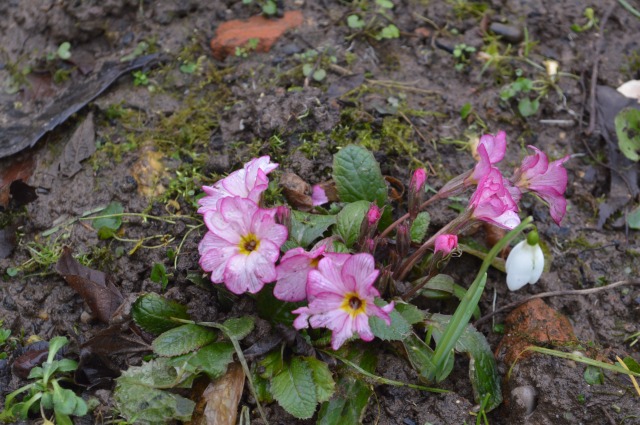 A true winter flower is the winter aconite, Eranthis hyemalis which soon seeds around into carpets if it is happy. I look out for its little, round yellow buds early in January. The flowers open out in the sun to look like little buttercups with a nice green ruff.

At the same time as the winter aconites the earliest species crocuses open up. If you prefer the shiny fat Dutch crocus you have to wait until March. I love the little Tommies, Crocus tommasinianus which seeds around as happily as the aconites and comes in various shades of violet. The early bees love them too. 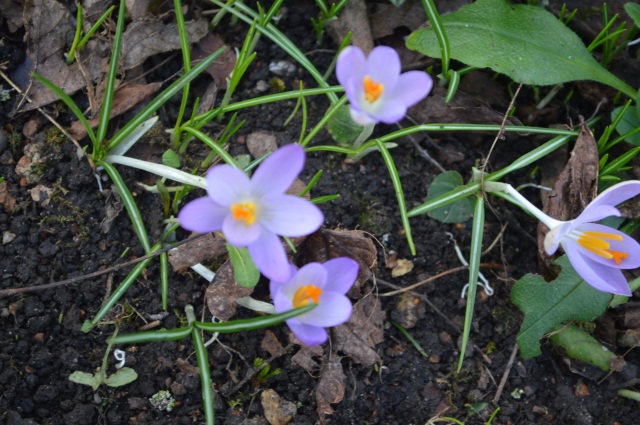 It’s just a little early for the first Iris reticulata in the garden although ‘Pauline’ is showing purple. I prefer growing them in the greenhouse so that I get them early and they don’t get spoilt by bad weather. I have a big pot of the sky blue- Iris reticulata ‘Alida’ which I planted up for last winter and it looks good again.

I have found two new varieties this year and they are both delightful. The first one is Iris reticulata ‘Painted lady’ and she does indeed look as if she has been painted. 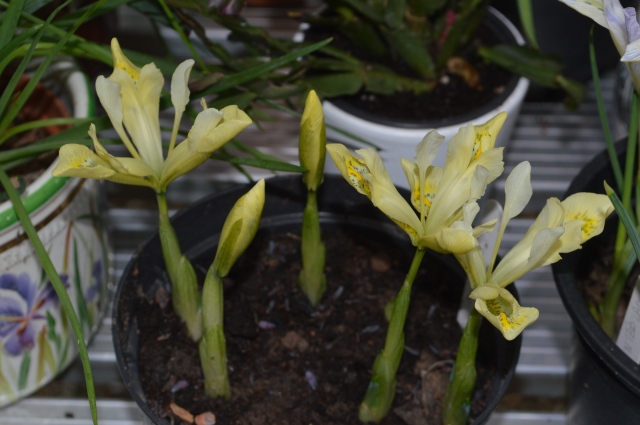 I will be revelling in my hellebores next month but here are a few early ones. Let’s start with the native Helleborus foetidus which pops up all over the garden.

A new one this year is ‘Painted Bunting’ with large flowers edged in deep pink.

I have several helleborus ericsmithii hybrids and they are all gorgeous. 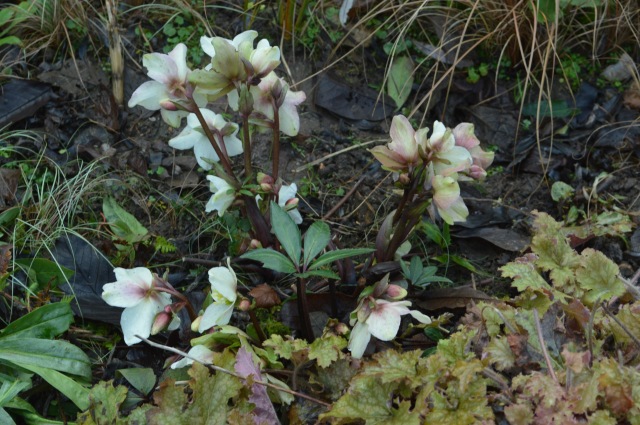 Most of my doubles are not out yet, but the dainty Helleborus ‘Phoebe’ is looking good. 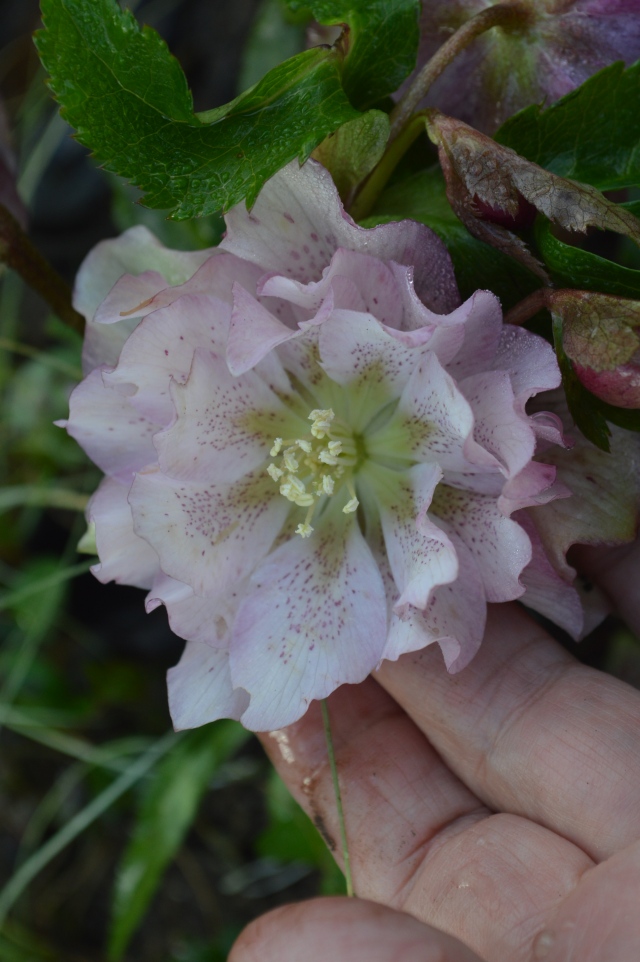 I read sometimes that you should remove the seedlings from your special hellebores so that you keep only special ones. I am glad that the previous owner of this house didn’t heed this advice. I have carpets of hellebores everywhere and they are all beautiful. It is a chore removing all their leaves in winter but it is worth the effort to keep them free from fungal disease. 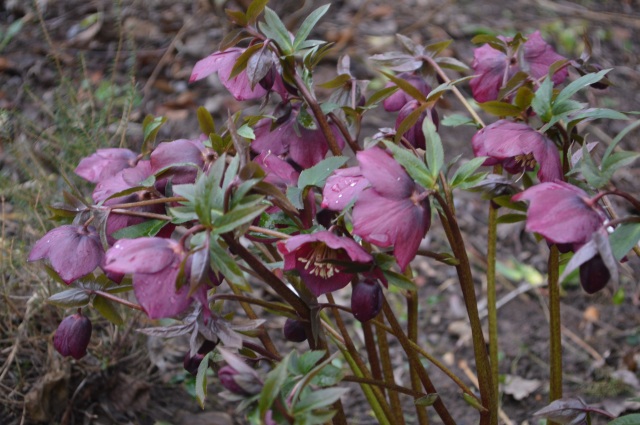 I did feature my special Narcissus minor ‘Cedric Morris’ last month. I have another clump which is blooming now. This narcissus is difficult to find and expensive but if you get a chance to buy it, you will be rewarded by perfect little daffodils in the darkest days of winter. 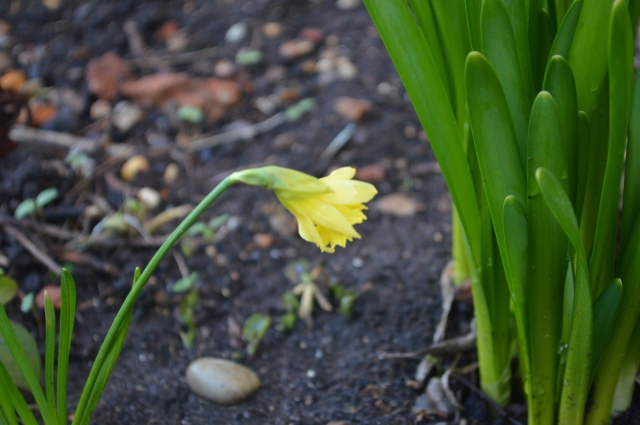 I am a bit late with my favourite blooms this month but if you have time to join me and share yours it would be lovely. Otherwise please show us your favourite February blooms.