In a Vase on Monday. In the Red.

Many followers of Cathy’s meme ‘In a Vase on Monday’ have become so enthusiastic about it that they have created cut-flower beds. I have  got caught up in it too and I have turned over one of my raised vegetable beds to annuals for cut flowers this year. 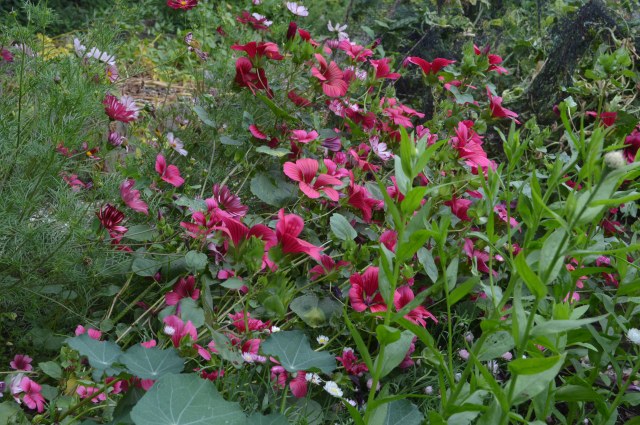 I always grow a few cosmos and the one I chose this year is a gloriously rich ruby-red, stripey one called ‘Velouette’. 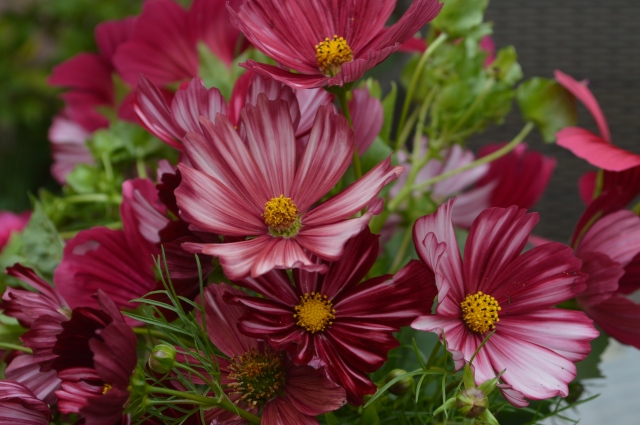 It is a perfect match for the satiny magenta- red flower of Malope trifida  ‘Vulcan’. 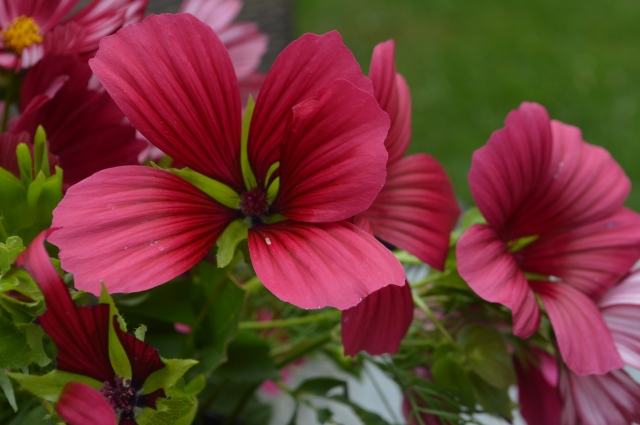 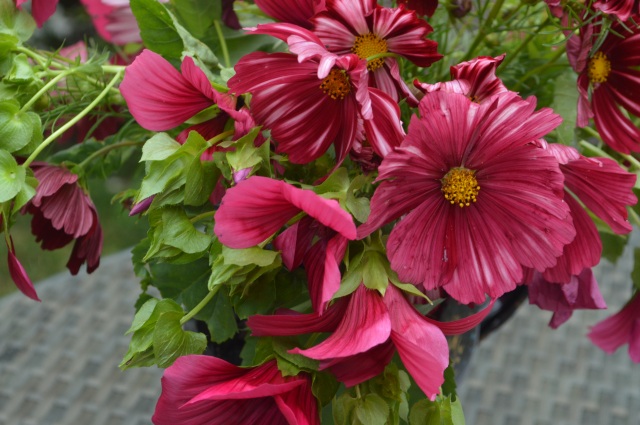 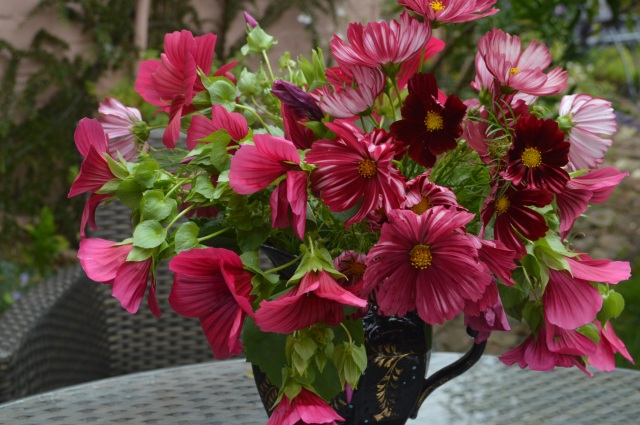 The red flowers look good in my black Victorian mourning vase. The Victorians were addicted to mourning and all the funereal impedimenta that went with it. I like black though and it sets off these dark ruby flowers perfectly. 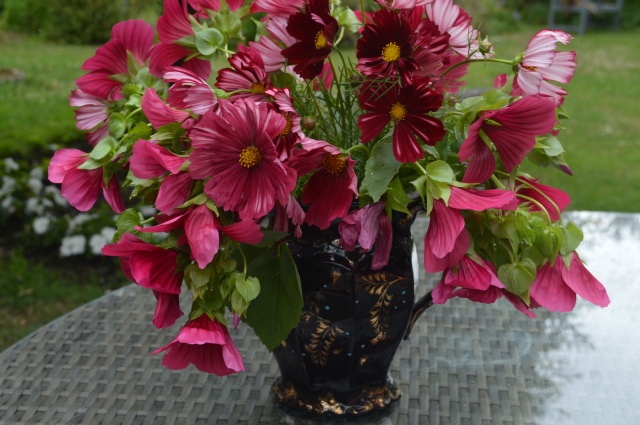 It is amazing the variety of shades of colour that come under the word red. I don’t think ‘Vulcan’ is a good name for the malope. Vulcan was the Roman Fire God and I think the name should be reserved for fiery red flowers like this Crocosmia ‘Hellfire’. This one is better than ‘Lucifer’ as it has no trace of yellow in it and is redder than red. 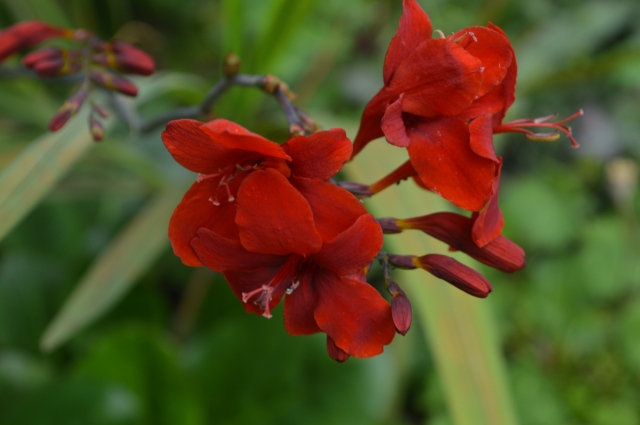 Now that’s the sort of red I think is appropriate for a Fire God.

Thinking about red flowers made me go out foraging in the rain for a few true red flowers in the garden.  And so here is the little vase of  hot reds to cheer up a dismal day. The dahlia is ‘Tam Tam’ and I used dill flower heads. 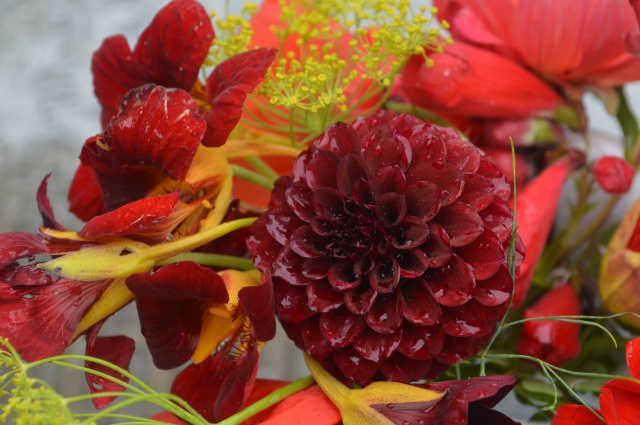 Once the rain came on heavily I had to move indoors and I discarded most of the dill and added a few dark heuchara leaves and some fluffy Pennisetum villosum grass heads for a sultry look. 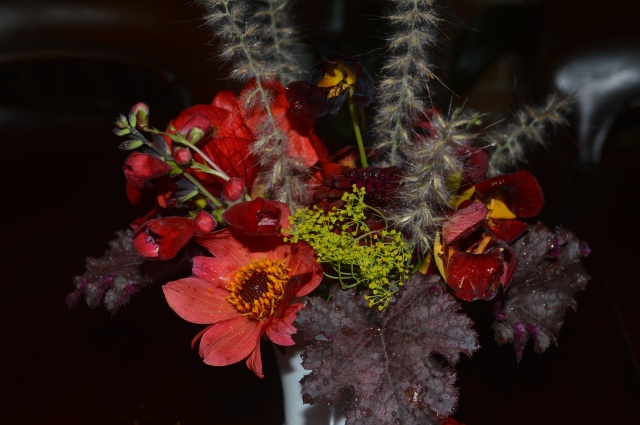 I used one or two  blooms from my ‘Bishop of Llandaff’ seedlings for different shades of red. 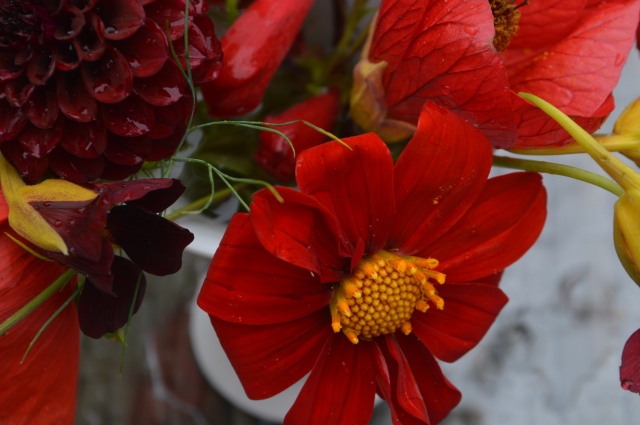 I love the veined flowers of Abutilon ‘Nabob’. 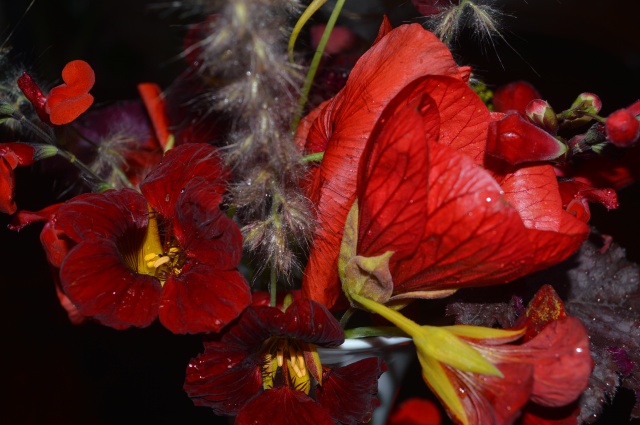 The Nasturtiums or ‘Nasty urchins’ as I thought they were called when I was a child, are ‘Black Velvet’.
I have used a red Penstemon ‘ King George’. 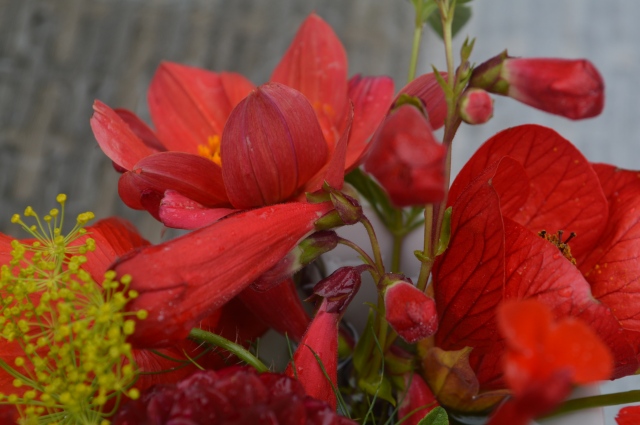 I also used a few sprigs of Salvia ‘Royal Bumble’. 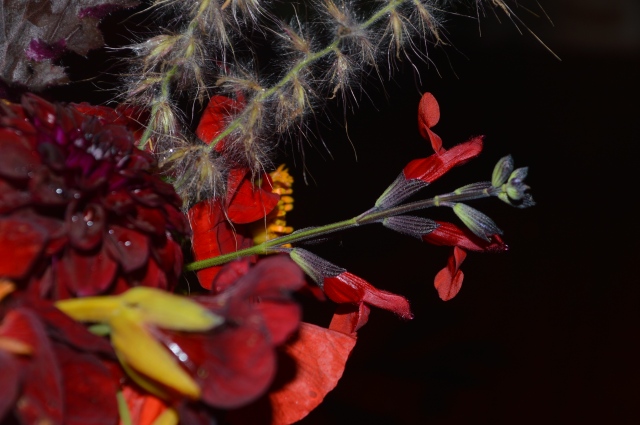 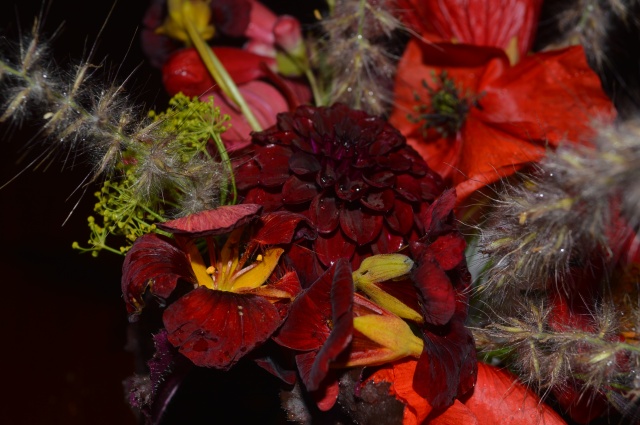 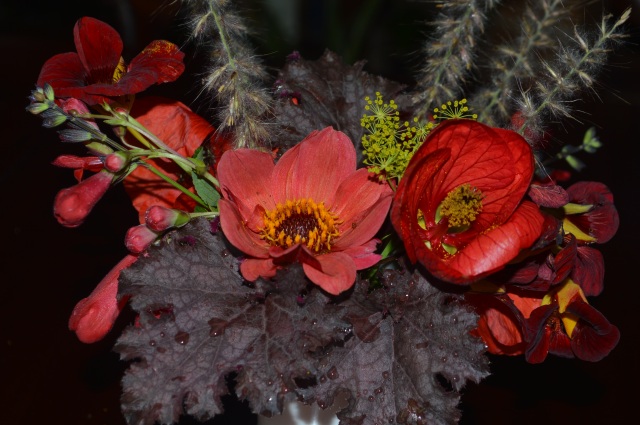 All these reds have made me long for a bit more late summer red. In my last garden, inspired by the red garden at Hidcote, I created a red border. I haven’t got so much space here, but still I think I need to find somewhere to devote to a few more floral fireworks.

In my next post, now I am all fired up, I will explore the red theme a bit more. In the meantime thanks to lovely Cathy at Ramblinginthegarden for getting us all to put something ‘In a Vase on Monday’

18 Responses to In a Vase on Monday. In the Red.