Oh No, Not November.

But like it or not, here we are with dark, late afternoons and our gardens closing down for the winter. Yesterday was Halloween and we had pumpkins and  for some of us there were ghosts floating round the garden. 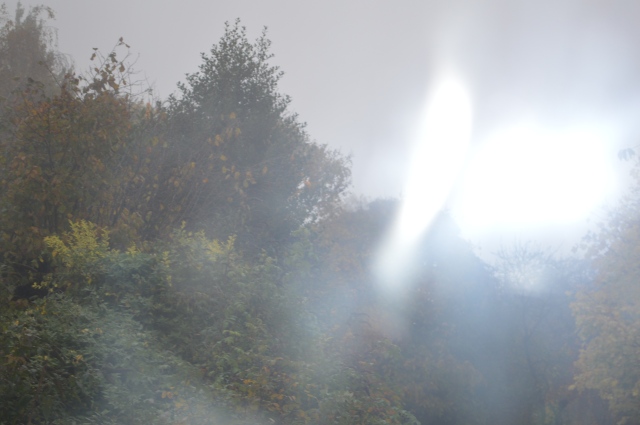 Actually this was taken very early this morning before it was properly light. I was trying to catch a heron taking off, but the ghost got in the way. When I went outside the only ghostly figures were my three tree ferns wrapped up in their fleecey vests. Hector didn’t think much of them at all and was convinced that they are up to no good, standing there flaunting their underwear. When it gets really cold they will get tartan blankets and look respectable.

But the leaves haven’t all fallen off yet and we still have  colour to enjoy. 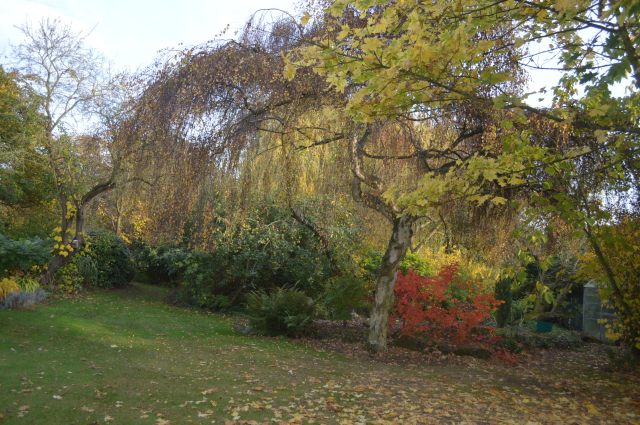 The little bonfire you can see on the right of the weeping birch is Cotinus ‘Grace’  which is particularly good in autumn.

The area round here is getting a face lift. The soil is gritty and there are stones and the remains of a path so it must have been an an alpine bed once. Now, it is full of ground elder, bindweed and other rubbish so I am giving it a big clear out and then I will put down a membrane, relay the stones and cover it with grit and it will have a new lease of life once the weeds have been killed off. Life is too short to spend  time trying to keep areas like this looking decent when they are full of pernicious weeds and dying roses. Next time you see it, I hope it will be transformed..

The other area keeping me busy at the moment is the last of the six silly little island beds which covered this garden like a rash. Alan Bloom of Foggy Bottom, Bressingham had a lot to answer for in the 70s, when he encouraged everyone to create island beds and grow heather and conifers. They may look good at Bressingham because the beds are huge, but downsized into the average sized garden they look ridiculous. This particular one had a massive holly, buddleias, a flowering currant and fuchsias, underplanted with ajuga. For goodness sake, the people who used to live here shouldn’t have been allowed into the garden if this was the best they could come up with. I thought I would have to get a tree surgeon in to get rid of the holly, but the Pianist amazed me by felling it himself with his chainsaw. It feel neatly just where he said it would, apparently he used algorithms or something to work it all out. No harm was done to my veggy beds or the Pianist himself. He fell over in the village shop the next day and had to go to A&E and have his hand stitched up after slicing it on the display cabinet. But he chopped down a huge holly with not so much as a scratch.

I know I really shouldn’t let Mr Clum near a chainsaw. He once fell out of an apple tree whilst using it. He had the presence of mind to throw it away and he was quite unharmed, but the sight of it will stay with me forever.

Anyway, I now I have the stumps to worry about. I need a man with a mattock and bulging muscles. Obviously, the one I’ve got, with hands all wrapped up in bandages like Frankenstein won’t be much good for this.

When it is finally cleared it will be lawn and that is the last of the useless little beds.

Other autumn leaves looking good right now are some of the witch hazels in either yellow or orange. 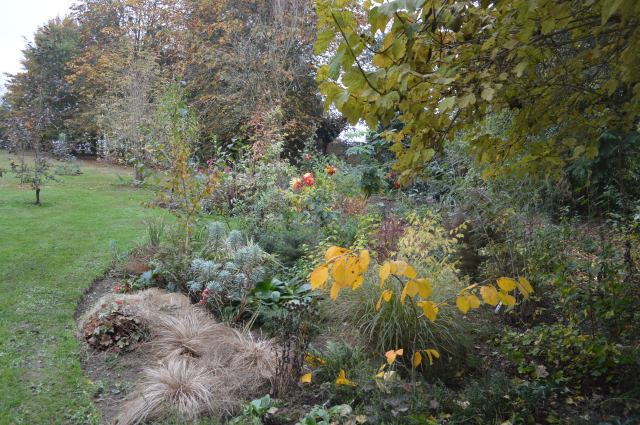 Spirea japonica ‘Gold Flame looks beautiful in spring and again now in autumn. What a pity it has cerise pink flowers in summer which clash most awfully with the foliage. Every summer I  threaten it with eviction and then I forgive it again in autumn,. 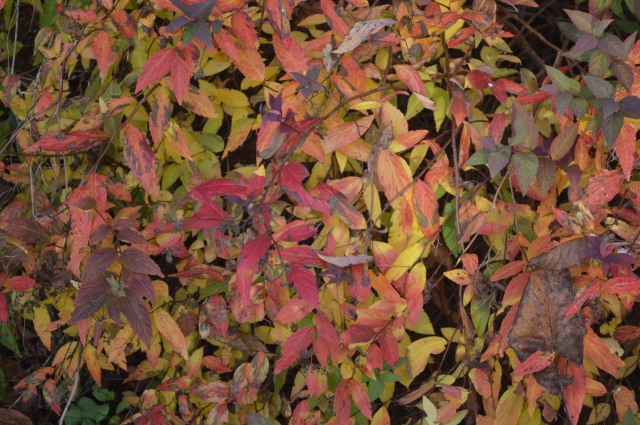 Forsythia is rather common and such a strident yellow in spring. I got rid of most of them, but I left just one. It does have excellent autumn colour. 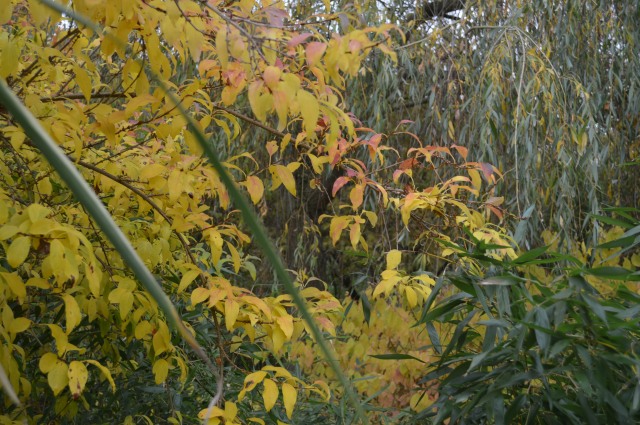 I have a little Acer griseum and I am looking forward to it growing up a bit to show off its cinnamon-coloured peeling bark. It is growing with the rare Chrysanthemum ‘Belle’ which I got from Plant Heritage. 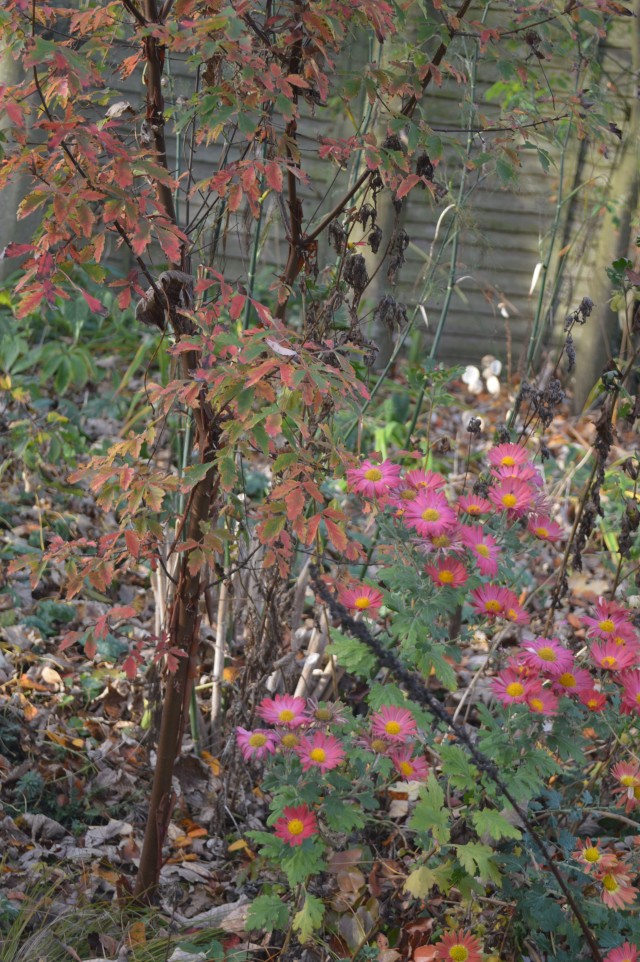 I have several acers but none of them are as wonderful for autumn tints as the ones my daughter and I saw at East Bergholt arboretum on Saturday. We decided the very best were these two. They are both going straight to the top of the wish list.

But autumn is the time for berries and fruit too. My garden is full of hollies. Perhaps the Pianist can get rid of some more. In the meantime they are good for berries in winter and the birds enjoy them. This one is growing by a huge Malus ‘Hornet’. The yellow crab apples look good now but they turn brown and look awful later.

I have just bought a crab apple for the winter garden.It is Malus x robusta ‘Red Sentinel’. The fruit are long lasting and should hang on, looking good  all winter.

I have one shrub in bloom right now and it is the pretty Mahonia eurybracteata subsp. ganipinensis ‘Soft Caress’. A pity about the tongue twister of a name but the leaves are soft and willowy.

At ground level there is bright red foliage on this euphorbia. I can’t remember which it is, but it could be Euphorbia palustris.

I bought bergenias for the winter garden for lovely winter foliage. One of them is already colouring up. It is Bergenia ‘Mrs. Crawford’.

As for flowers, the asters are going over but there are still plenty of dahlias and more chrysanthemums are coming out each day.
This dahlia is a bit big and blowsy, it was a bargain supermarket buy last year. Still it is quite eye -catching in the winter garden. 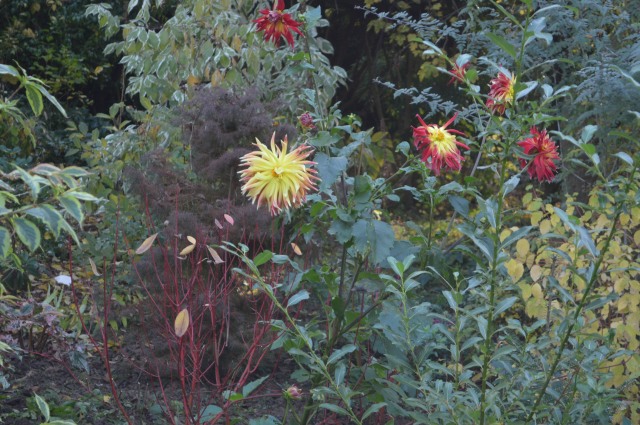 I quite like the next one but it was misnamed. It was supposed to be the sumptuous dark red ‘Arabian Night’.

Still looking pretty in pink are these three. 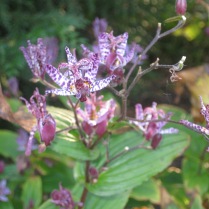 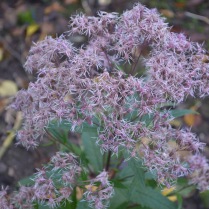 And under the trees there are autumn crocus to enjoy. 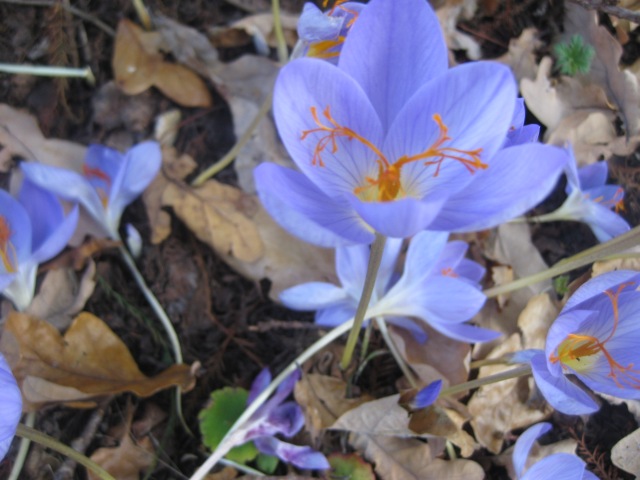 Well,on second thoughts perhaps November is not so bad after all.

56 Responses to Oh No, Not November.