I have grown Charlotte potatoes this year as my chef, ( aka the Pianist) prefers waxy potatoes and has forbidden me to grow the sort that fall apart in the water as they are cooked. But that is not the sort of potatoes that I am writing about here.

I love the climbing  Chilean Potato Vine Solanum crispum ‘Glasnevin’. It is always full of  clusters of lilac- coloured blooms with prominent yellow stamens. It grows exuberantly so I hack it right back from time to time and then off it goes again. The correct time to prune Solanum is in the spring, when the side shoots should be cut back to about 6 inches. I actually cut it back when it starts to annoy me by blocking the path. Its long shoots are desperate to get into the nearby silver- leaved pear Pyrus salicifolia ‘Pendula’ and although they look good together, I can’t put up with this sort of anarchy. The Pyrus is getting ideas above its station at the moment too; like everything else in the garden, it very badly needs a haircut.

I am a bit confused about the name of the lovely white potato vine. Is Solanum jasminoides ‘Album’ the same thing as Solanum laxum ‘Album’ ? They look the same to me and so I am not sure which one I have. But whatever the name, it is very pretty and blooms for longer the the blue one. The flowers are supposed to be lightly fragrant, but I cannot detect any scent. 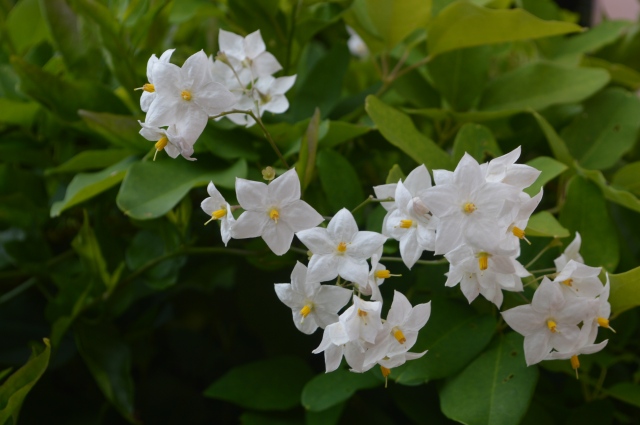 When I was at Beth Chatto’s nursery a couple of years ago I fell in love with the fabulous solanum that she has growing on the wall of the shop. This has white flowers which are tinged with violet. Some of the flowers in each cluster are white, some are violet. Fortunately, there were some for sale, because I needed it very badly. It is called improbably, Solanum laxum ‘Creche ar Pape’. I noticed that Beth called it ‘Creche du Pape’ in attempt to make it more grammatically plausible. But on the other hand, it still doesn’t make much sense. What would a Pope need a creche for? One likes to think he is above such things, unless like one of the earlier popes, such as Pope Paul 111, there is a brood of children to be accommodated. Anyway, I did a bit of research and found that there is a garden in Brittany called ‘Pape Ar Crech‘ and I suppose this lovely Potato Vine was born there. Somewhere along the line the name has gained an ‘e’.

I am going to Beth Chatto’s soon with Christina from MyHesperidesgarden and I will take a photo of the lovely one there. In fact I am sure that Christina will fall in love with it too, so I will take some cuttings for her.

As this is an alliterative-themed post,  I am going to write about some pincushion-type plants. They are everywhere in the garden right now.  The pretty Knautia macedonia is a bit of a thug, but I don’t mind, it is so pretty and the seed heads are lovely too. I believe this used to be a scabious, but the powers that be decided that it is  Knautia – pronounced ‘naughtier’. Christopher Lloyd disliked this plant, but I can’t see why, apart from its thuggish ways, I think it is a delight.

I grew some wine-coloured scabious from seed a couple of years ago and they obligingly seed around everywhere now in different  shades.. 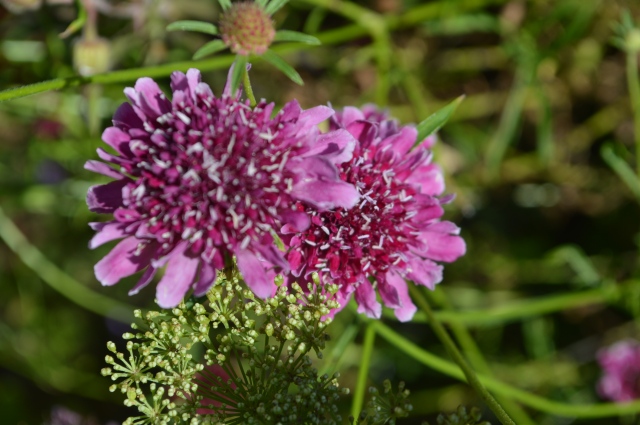 My favourite pincushion flower is Scabiosa atropurpurea ‘Black Knight’. It has large black flowers with little white pinheads and is the most dramatic of all the lovely tribe of scabious. It is said to be lightly fragrant, but I think it smells faintly of public lavatories. Very clean ones; but still not a pleasant smell. It is only detectable if you put your nose right into it. Bees and butterflies love. Well,the butterflies would if they were around. I just seem to have Cabbage Whites this year. Where are all the butterflies? Even the Buddleia hasn’t got its usual flutter of colour round it.

Most of my Astrantias are over, but I still have this one in bloom. I love the old-fashioned name,‘Hattie’s Pin Cushion’ for this plant.

My last pincushion is a silver-leaved Santolina. The foliage is lovely enough, but I fall in love with it all over again when it blooms. I can’t remember its name, as I have had it so long. 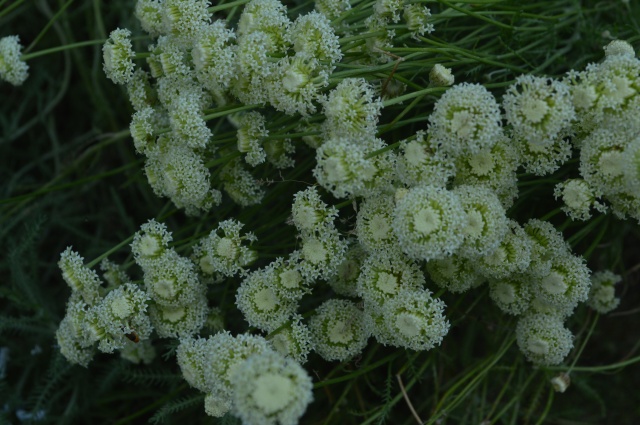 As this is a ‘P’ themed post, I must show you a couple of poppies. One is an Opium Poppy which turned up from somewhere and I think it is a very pretty colour.

The next is a Californian Tree poppy which is not really a poppy at all. Romneya coulteri is a very handsome plant with pure white flowers and a nice pop pom of yellow stamens. It is sun-loving and hates root disturbance. This can make it hard to establish, but if it is happy, it romps away enthusiastically. 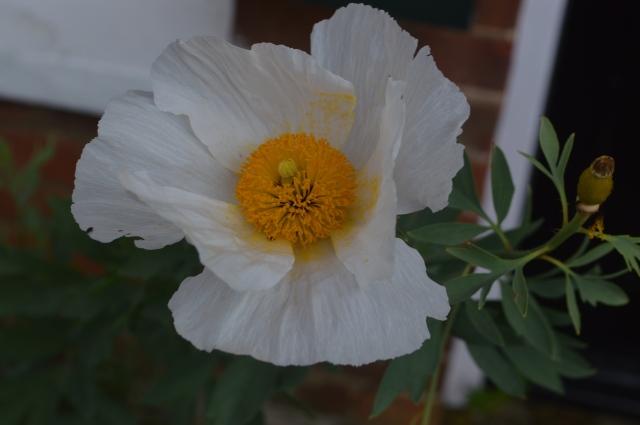 I have a really pretty Clematis called ‘Pagoda’ which I had coveted in a friend’s garden for years. I finally found it for sale at Great Dixter last year, although it was an act of faith buying it as it looked dead. Fortunately, it is now thriving and sharing an obelisk with ‘Betty Corning’.

My last ‘P’ is an imposter and I am very annoyed about it. I finally succumbed and bought a lovely Hydrangea which I have seen on several blogs. My reluctance was caused by the eye-watering price and even more, by the truly toe-curlingly, embarrassing name. Yes dear readers, I shame-facedly bought a plant called ‘Pinky Winky’. I tended it lovingly and paid somebody to water it whilst I was away.
But it is clearly not ‘Pinky Winky’. Pinky Winky has pretty pink plumes. When I complained to the nursery, they said it was perhaps my soil. Which is rubbish, it was wrongly labelled. I don’t know what it is, but it’s certainly not ‘Pinky Winky, more ‘Whitey Whitey’. And I am weely, weely cross.

I could go on with this ‘P’ themed plant post, after all I have some lovely Penstemons and the Platycodons are particularly pleasing. But a pack of pesky pixies are whispering in my ear that enough is enough.

43 Responses to Potatoes and Pincushions.