In a vase on Monday. Pink Spiders etc.. 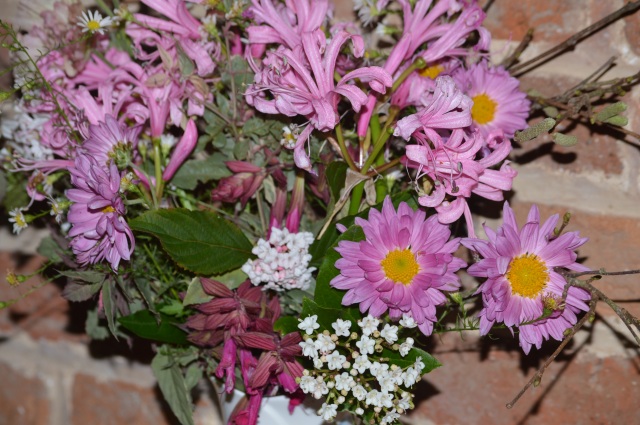 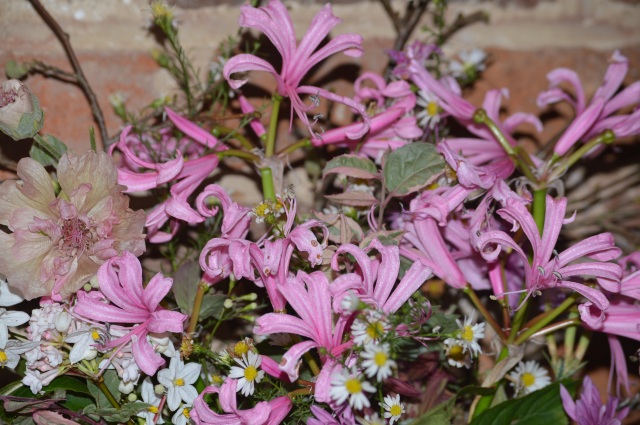 This vase started off in my mind as an arrangement just of nerines, with their spidery petals inspiring the title. Of course I couldn’t stop there. The frothy flowers of Sympyotrichum pringlei ‘Monte Cassino’ were just what I needed to set them off and also the pink edged leaves of Fuchsia magellanica ‘Versicolor’. Solanum jasminoides was looking so pretty too and just calling out to be used as a bit of extra froth. Alcalthaea suffrutescens ‘Park Allee’ is still going strong and will continue until the frosts.

I then decided I needed a bit of darker pink to stop it looking washed out, so I added some Salvia ‘Wendy’s Wish’ and a dark pink Chrysanthemum whose name I am not sure of.

As it is November, I added some wintery flowers of Viburnum. I dislike Viburnum tinus, although the flowers are useful for winter arrangements. As I keep pointing out, it smells of wet dog when it rains. Viburnum fragrans smells lovely and is more delicate.

I popped a few hazel catkins in as a reminder that spring is not far off. The picture on the vase is rather apt for November. Soon this is all that will be left in the garden. Except it is snails rather than seashells which will take over. Obviously.

As it is so gloomy outside, when I had finished this, I thought I would go and see what I could find to bring in for another vase to cheer us up. I’m afraid I really dislike November. This time of the year always reminds me of the last verse of the poem, ‘Toads Revisited’ by Philip Larkin:

‘When the lights come on at four
At the end of another day.
Give me your arm old toad:
Help me down cemetery road.’

I can’t actually remember the rest of the poem, just this miserable last verse. So, clearly more blooms are needed as an antidote to gloom and the lights on at four. 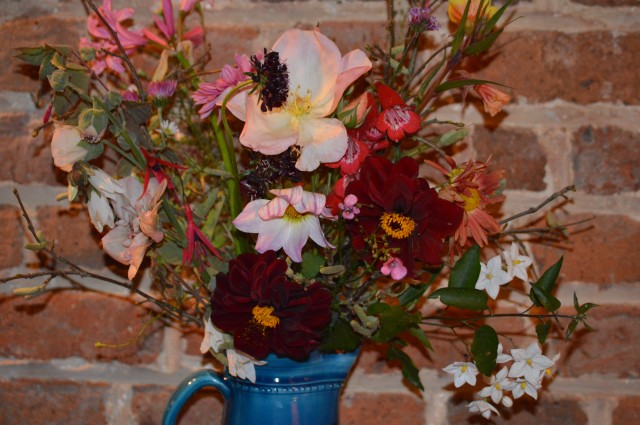 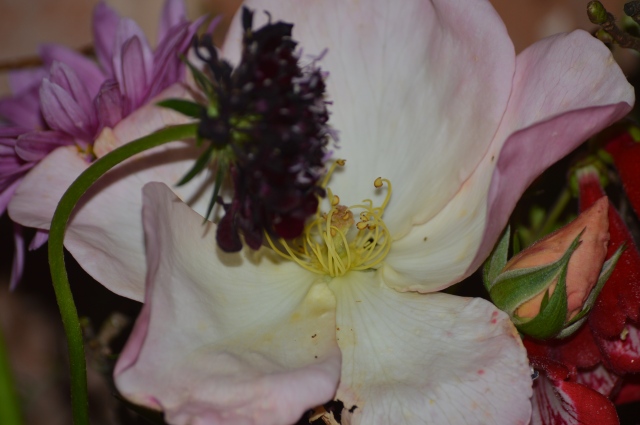 I wonder who Sally Holmes was? I imagine her as a rather  jolly school girl, not very clever, but always cheerful and up for a game of hockey, even when it is cold, damp and dark in November. She is so relentlessly cheerful, that she is rarely out of bloom. I partnered her with a black Scabious as a sobering influence.

I used a couple of the dark dahlias which I grew from seed, as something more suitable to this dark month. I love the way the pollen is spilling out like gold dust.

A red penstemon adds a bit of brightness. It is amazing how so many penstemons are still flowering.

The orange and yellow flower is a seedling of the orange Evening Primrose Oenothera‘ Sunset Boulevard.’

So there we have it, two vases for the price of one. Actually, I  have three vases at the moment, but the third doesn’t count because the flowers are not from my garden. They are a gift and I am told they came from the ‘poshest supermarket in Britain’. Goodness knows where they were grown and how many air miles they have collected. But still they are pretty. Not sure about the cabbages though. Maybe I will eat them. 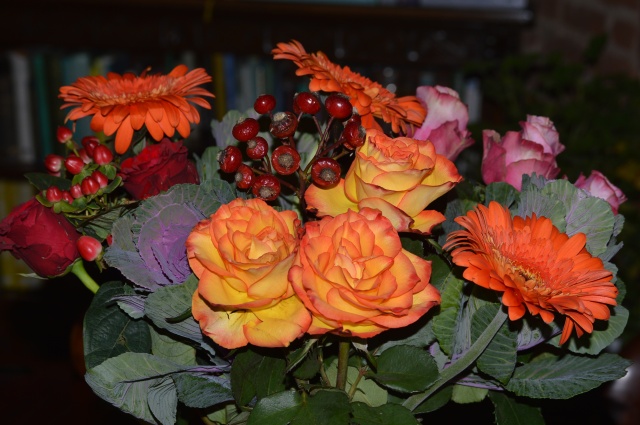 In a Vase on Monday is hosted by Cathy at Ramblinginthegarden. Today, she is celebrating the second birthday of the meme. Congratulations Cathy! Do join in with the celebration.

63 Responses to In a vase on Monday. Pink Spiders etc..