We have had a glorious end to October with a weekend of lovely sunshine.  The garden is aglow with warm shades of russet, reds, oranges and yellow. It is difficult to believe that this fanfare represents the death throes of the vegetation.  Looking out of the window is like a glimpse into fairyland. I hope I am not too late to celebrate it by joining in with Helen’s End of Month View meme.
The smoke tree, Cotinus coggyria ‘Royal Purple’ has a wonderful autumn colour. 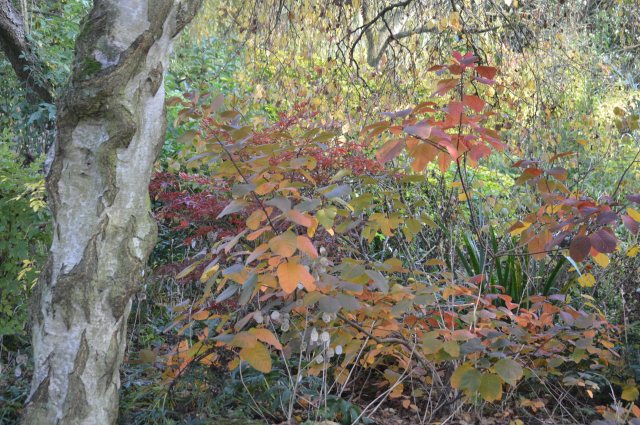 Cotinus ‘Grace’  is  different, but good too, it grows by this Acer, I forget which one it is now but it is beginning to turn red. 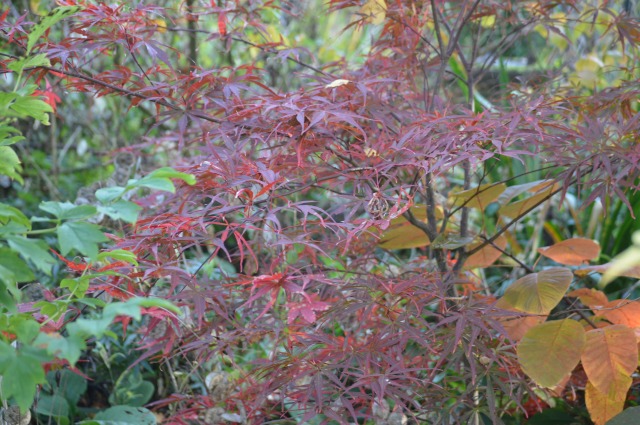 It is always exciting waiting for the different acers to reveal their autumn colours.

The hedgerow in the orchard consists of trees which are unremarkable most of the year but the Field Maple, Acer Campestre and the Poplar colour up beautifully in autumn. 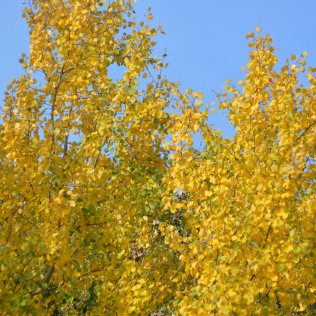 Cathy at Rambling in the garden has witch hazels that provide the bonus of beautiful autumn leaves. In my garden  Hamamelis pallida turns yellow and makes a colourful backdrop for the dahlias.  Hamamelis ‘Vesna’ and ‘Diane’ are supposed to have good autumn leaves, and I have both, but so far they are not looking very exciting. 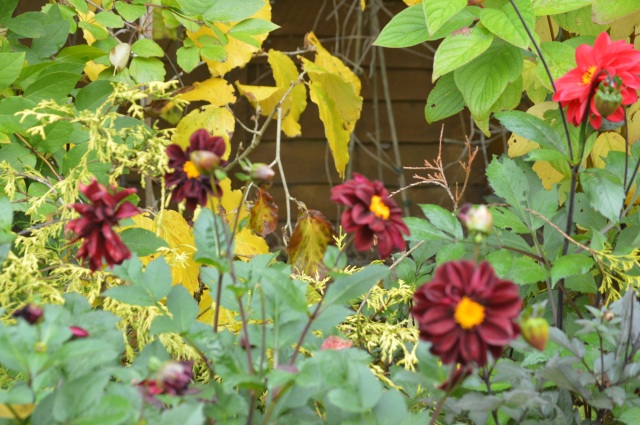 Trees and shrubs that provide interest for more than one season are very welcome. Amelanchier is useful for the delightful blossom in spring, but it has a beautiful autumn colour too. The only drawback is that both blooms and red leaves are quickly over. 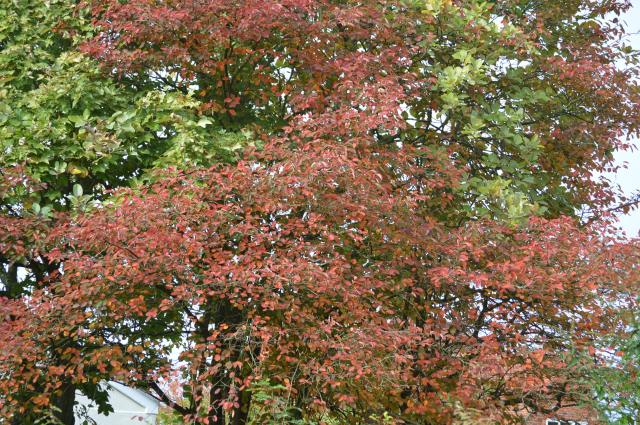 I am always singing the praises of the lovely red leaves of Cercis canadensis ‘Forest Pansy’, but in autumn they are burnished with orange and terracotta.

The Cornus alba ‘Baton Rouge’ with bright red stems in the winter garden has lovely autumn leaves which are an unexpected bonus. 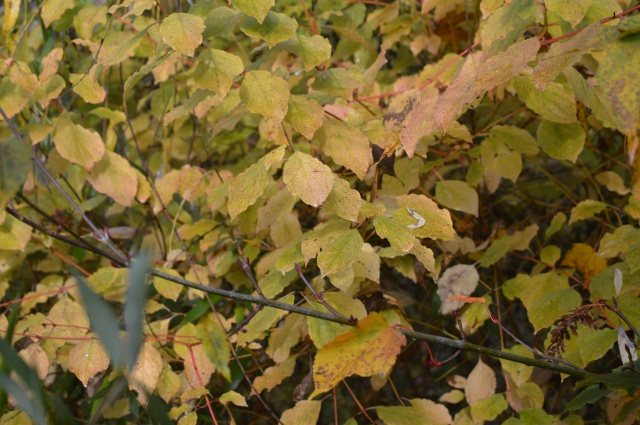 I have quite a crop of seedlings coming on for autumn enjoyment.  I have to shame-facedly admit that some of them were illicitly acquired. The berries just dropped into my pocket.  They include Malus, Sorbus, Acer and a selection of Euonymus with beautiful berries. I will have to wait a few years to enjoy these, but in the meantime I have bought two trees for autumn interest. One is a Liquidamber styracifolia to replace the one that died. The other is an impulse buy, a case of love at first sight. It is Koelreuteria paniculata ‘Coral Sunset’. 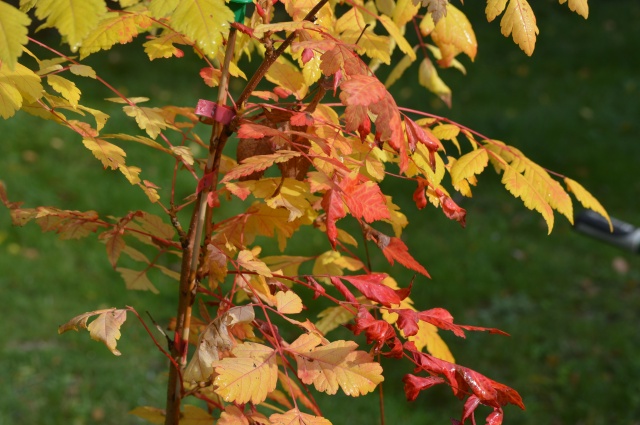 Well, could you have resisted this Koelreuteria?

Berries too are a source of delight in October.  Everyone loves the  shiny, purple berries of Callicarpa bodineiri ‘Profusion’. It is well named because there really is a profusion of berries. 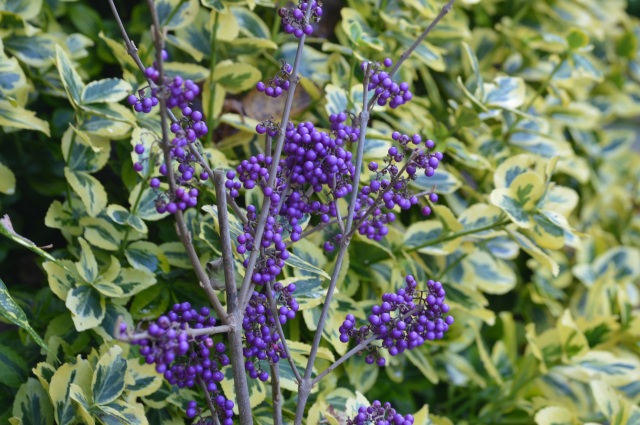 If I was choosing a yellow fruited Malus for the garden I would select the well-named ‘Butterball’, with large, long lasting, yellow fruit. The one in my garden is the more commonly seen ‘Golden Hornet’. It was obviously planted years ago, for it is quite a size. I do like the yellow fruits against a blue sky, but very soon the fruits will start to turn a very unattractive brown.

Never mind,  it provides a nice backdrop for the autumn garden. The yew on the right side of the photo is going to have to go. I have lived with it for five years now and I don’t like it, sitting plonk in the middle of the lawn. It is so big and tall and gloomy. A churchyard sort of shrub. I know that along with the rowan and the elder the yew was supposed to give protection against evil spirits, but I will just have to take my chance. 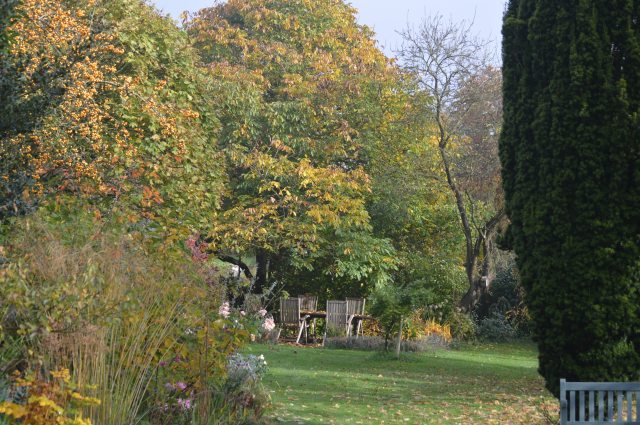 A couple of years ago I fell in love with the translucent, bright red  berries of the rare Berberis georgii when I saw it at East Bergholt arboretum. They are difficult to propagate so there was a long waiting list, but I do now have one of my own.

But of course it is not all leaves and berries, this year the October flowers have been wonderful. Roses are still in bloom. ‘Sally Holmes’ is particularly good and looks as fresh as it did in June. 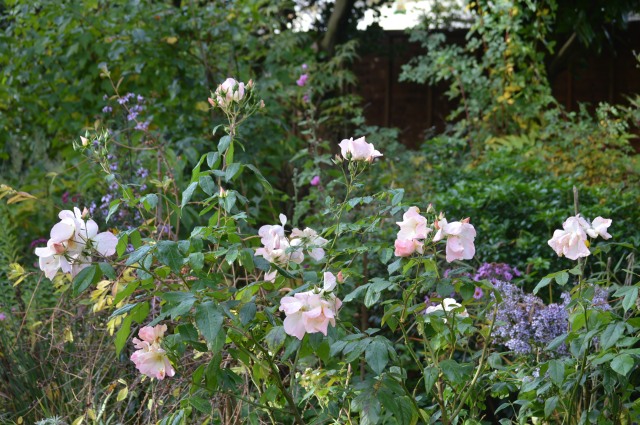 The nerines in the garden are late this year, but until the frost comes to spoil them they will continue to delight.

You don’t often see the late flowering Lespedeza thunbergii ‘White Fountain’ and I don’t know why, because it is lovely. Here it is with a red Penstemon, Verbena bonariensis and Nicotiana langsdorfii which blooms on and on. 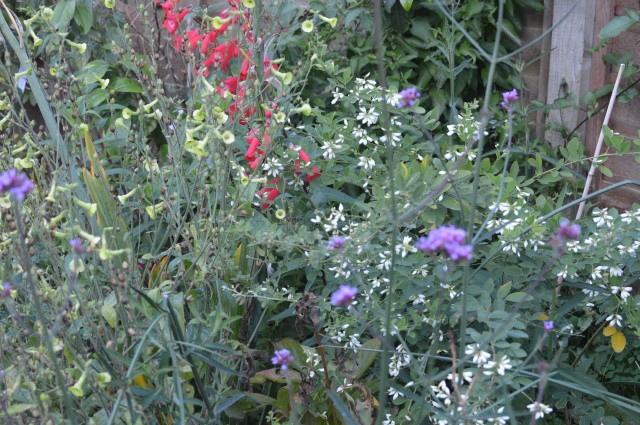 I know I am not the only one who is mad on salvias as several other bloggers are keen on them too. I haven’t yet shown you my bright red Salvia ‘Royal Bumble.’

Mahonia x media ‘Charity’ starts blooming at the end of October and it flower for ages. The orange Pyracantha berries behind it look good right now, but I hate Pyracantha, it is the spawn of the devil, as anyone who has to deal with it will tell you. Those thorns will get you however careful you are.

This is getting rather long so I will save my Chrysanthemums for November. I am not keen on the big mop heads, which look like unruly hairdos, but I do have a lot of spray Chrysanthemums. I will show you just one, my favourite at the moment. It is the lovely red ‘Belle’ It is on the red list as it is quite rare. It is growing next to Acer griseum which is getting lovely orange -tinged leaves.

Are we allowed to go into the greenhouse for an end of month view? Just a quick glimpse because the lovely dark pink Nerine ‘Zeal Giant’ is in bloom at last.

Thank you Helen at the Patient Gardener for hosting the End of the Month meme.