The fourth Wednesday of the month is Wildflower Wednesday, so why don’t you join in with Gail’s meme over at Clayandlimestone and see some wild flowers from around the world.

For this month’ s post I was short of time so I decided to take my bike to see what wild flowers I could find within two or three miles of my home. First of all I headed down to the river. There I found great banks of the tall Impatiens  glandulifera. It grows up to 2 metre high.  This one was growing on the bridge.

It is not native here; it comes from the Himalayas. It was introduced into this country in 1839 at the same time as those other two pests, Giant hogweed and Japanese knotweed. It was actually introduced into the glasshouse at Kew Gardens. Within 10 years of its introduction, this Himalayan balsam had escaped from gardens and had started to clog up our rivers. It is an aggressive self sower; a single plant can produce 2,500 seeds. The seeds pop out with such a force that they are carried up to 7 metres in distance.  It is also thought that it excretes substances that are toxic to other plants so nothing can compete with it. This is called allelopathy. It is nectar rich which you might think is a good thing, but it means that other flowers cannot compete for the attention of the bees and other pollinators.
The flowers are pretty; they are thought to resemble helmets and that is how it got its name of ‘Policeman’s Helmet’ or ‘Bobby Tops’. They have an orchid look to them. I like the description of the poet Anne Stevenson;

‘Orchid-lipped, loose-jointed, purplish indolent flowers
With a ripe smell of peaches, like a girl’s breath through lipstick.
Delicate and coarse in the weedlap of late summer rivers.‘

Because it is so attractive people planted this plant in the wild and that added to its range. In 1948 a Miss Welch collected seeds in Sheffield and introduced them into the river near Newport on the Isle of Wight. People took seeds on holiday to Ireland, France and Spain. It is now an offence to introduce it into the wild. But it continues to be a real threat to the biodiversity of our riverbanks. Scientists have discovered a rust fungus which seems to attack just  Himalayan Balsam. If it passes safety tests I suppose it will be released into the UK. This is a rather a worrying thought as we have quite  enough plant pathogens destroying our flora without introducing new ones.

Himalayan Balsam is just one example of an alien plant that threatens our native flora. Rhodendron ponticum is destroying the flora of many of our woodlands. It is a reminder that as gardeners we have a responsibility to maintain vigilance when we plant exotics. We don’ t always know which plants will be a threat until it is too late.

This is a plant of marshes and riverbanks. It is tall with long flower spikes which are nectar rich for long tongued insects such as bumble bees.
There are some lovely cultivated forms of this Loosestrife such as Lythrum salicaria ‘Robert’ which is pink and ‘The Beacon’ and ‘Firecandle’ which are red. These cultivated forms do not grow as tall as the wild one. I like the wild form and grow it round my big pond amongst Eupatorium, bamboos and Hostas. It does seed rather enthusiastically so it is best to cut it down when the flowers go over.

I carried on my way towards the little village of Edwardstone. I was delighted to find a large clump of this lovely Toadflax on the verge.

Linaria vulgaris is sometimes called Butter-and-Eggs because of its yellow and orange colour. I love its cheery snapdragon type flowers. It has narrow glaucous leaves. It is supposed to be quite invasive but I have only ever seen it grow in quite small clumps. It is so pretty I would like it in the garden. It used to be used medicinally as a diuretic or a cure for jaundice. The flowers soaked in milk were supposed to be an insecticide.

The village of Edwardstone has a large green where wild flowers grow in abundance. 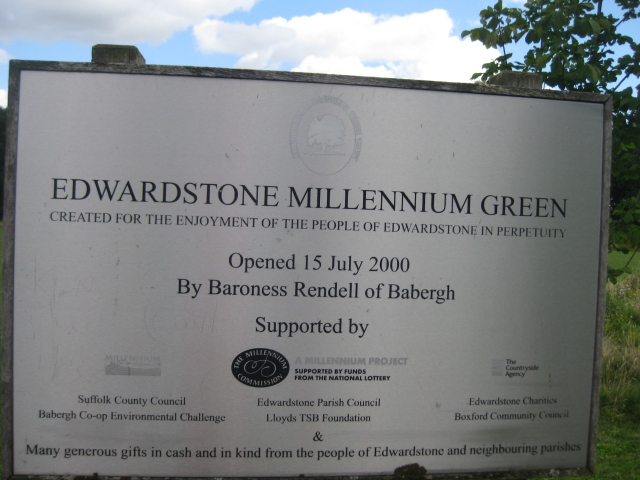 Ruth Rendell, the author of so many murder mysteries  loves Suffolk. She had a home in the  nearby village,  Groton, until quite recently.

There are plenty of lovely wild flowers growing on the green here. I love this big clump of tall teasels.

Lotus corniculatus: Bird’s Foot Trefoil grows in abundance.  The name comes from the seed pods which are supposed to look like birds’ feet. One of the many other common names for it is ‘Granny’s Toe Nails’ which is a bit revolting. This lovely little plant is much loved by bees and butterflies.

I love the frothy, yellow flowers of Galium verum; ‘Lady’s Bedstraw’ which grows here too. It gets its name from the fact that it used to be used as a stuffing for mattresses. It also used to be used in the making of cheese because it curdles milk and colours it a rich yellow. It had many medicinal uses. This is another wild flower which I would be happy to grow in the garden. 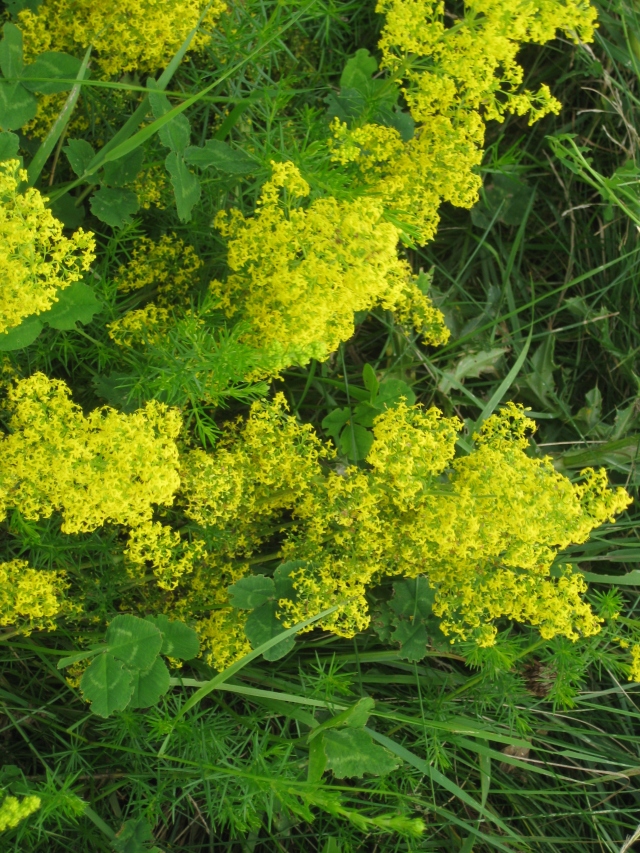 One more shot of the wild flowers here and then I had to be off home.

Many thanks to Gail for hosting this meme which celebrates our wild flowers month by month.