The garden is looking a bit battered after the wind and rain that we had,  but there are still plenty of plants to enjoy. And it’s daisy time. 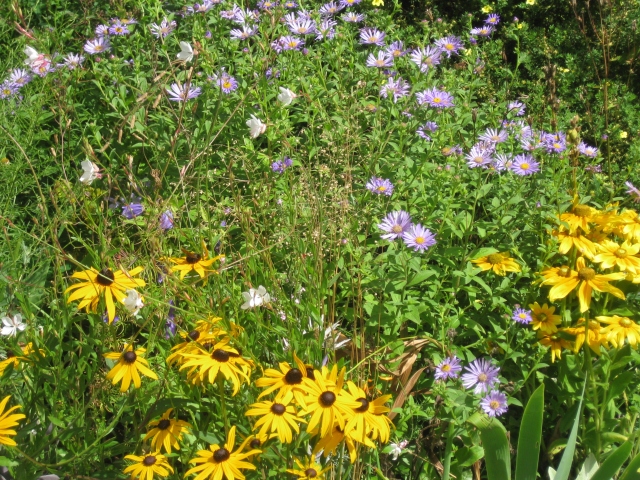 The discs of sunny Rudbeckia are always welcome. Rudbeckia fulgida. var. sullivantii ‘Goldsturm’  to the left of the picture,  with the brown cones in the centre of each flower, blooms over a long period, it doesn’t need staking and it seeds around generously. What’s not to love?
The Rudbeckia to the right of the picture is an annual: Rudbeckia hirta ‘Prairie Sun’. It is the first year that I have grown this one and I love it. I often find that so-called annual rudbeckias last for a few years and I am hoping that this one will. The next picture is of the tall Rudbeckia herbstonne which I  forgot to stake and it is all over the place, after the high winds that we have had. It still looks good though. 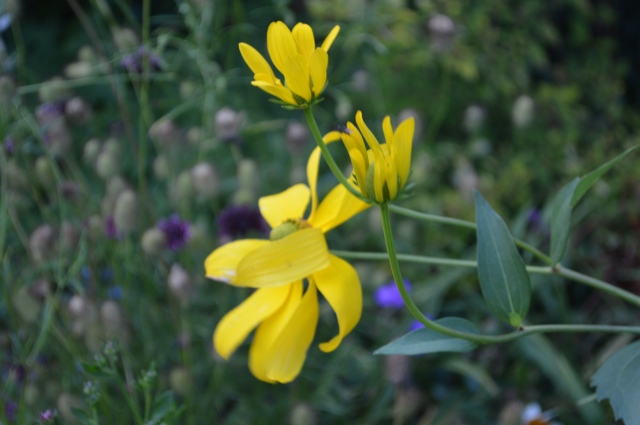 The first Asters or Michaelmas daisies of the season are the varieties of Aster frikartii. I have two;  Aster frikartii ‘Wunda von stafa’ which is in the first picture and the almost identical Aster frikartii ‘Monch’. These two Michaelmas daisies are my favourites because they start so early and go on flowering so long. They never get the mildew which ruins the look of so many Aster novi-belgii cultivars. Graham Stuart Thomas said that Aster ‘Monch’ is one of the six best garden plants and I certainly wouldn’t be without it. 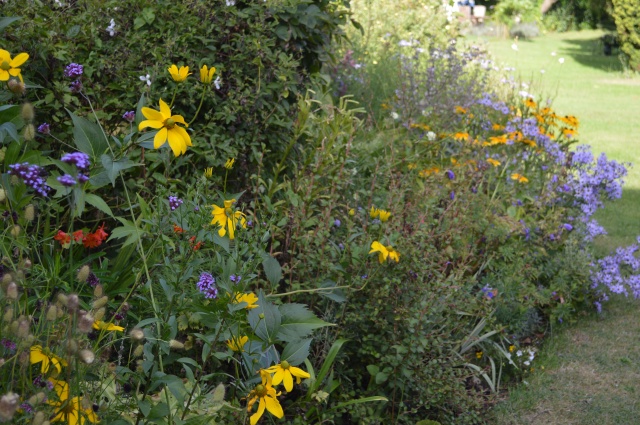 The little Crocosmia you can see to the left of the picture is one of my favourites. I only bought it last year so it hasn’t had time to bulk up yet. It is such a lovely colour. It is called Crocosmia ‘Limpopo’. I have mentioned in a previous post that if you have several different crocosmias it is fun to grow some of the seeds and see what you get. I am looking forward to trying some of this one. 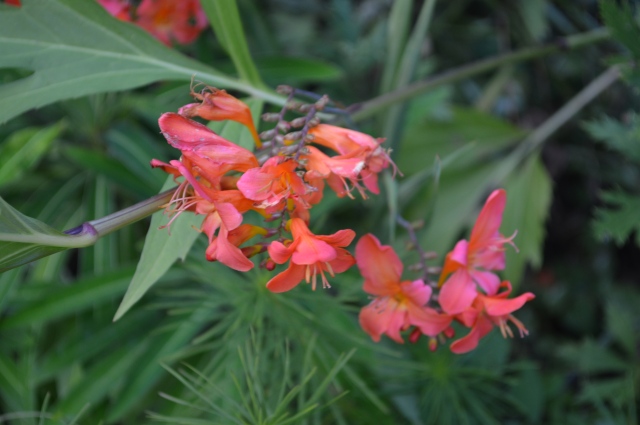 Further on in this bed is a very pretty Scutellaria but unfortunately I have lost the label and can’t remember which one it is. Perhaps someone can help me. 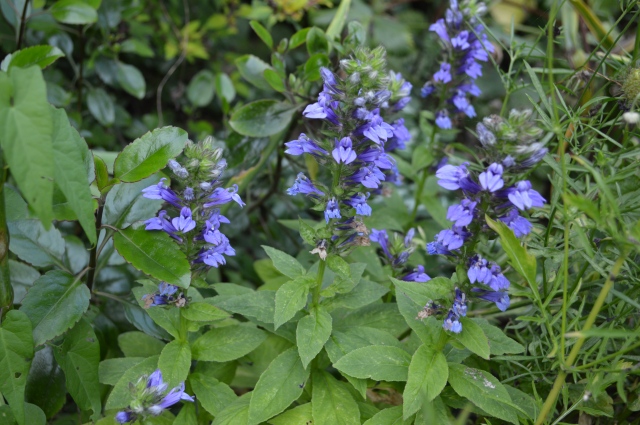 Quite a few of the roses are blooming again and very welcome they are too. I will not show you all of them but this one: Rosa ‘Summer Song’ is such a lovely colour. David Austin describes it as ‘burnt orange’. 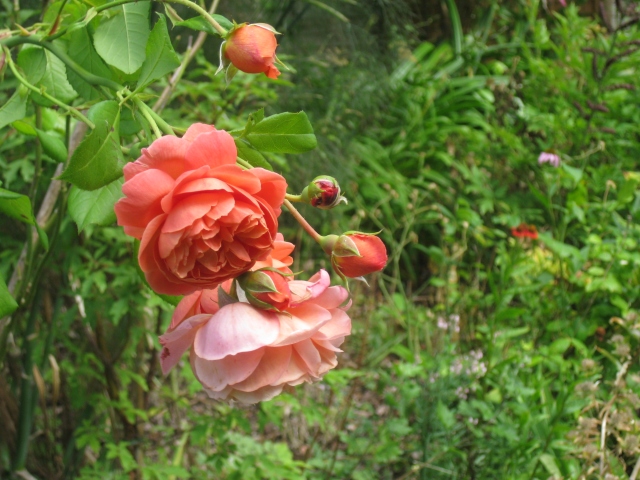 And while we are on shades of orange I will show you my favourite ginger lily: Hedychium densiflorum ‘Assam Orange’. It was introduced into this country by Frank Kingdon-Ward who found it growing in Assam in 1938. I grow it with ferns; it seems to be quite hardy. 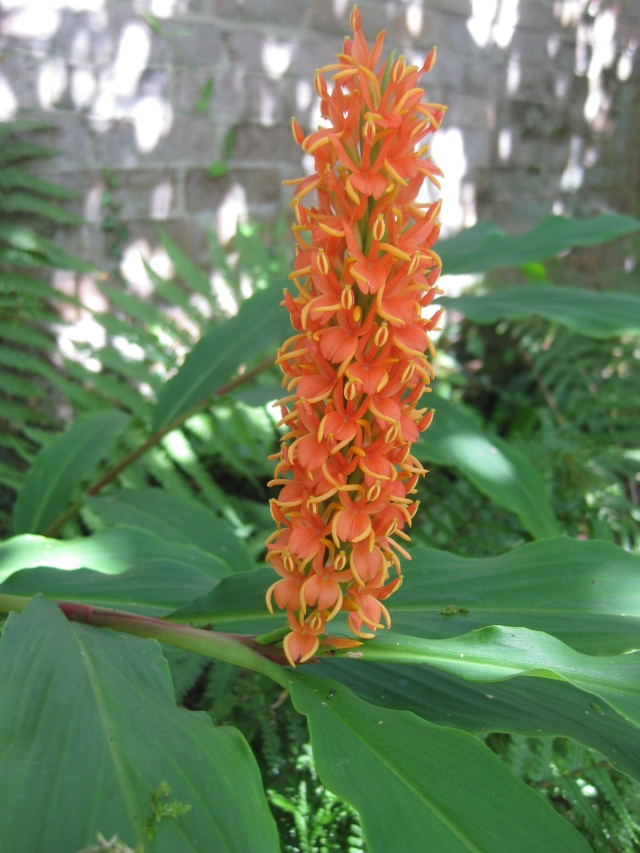 The Pineapple lily: Eucomis are coming into their own now. I grow the tall ‘Sparkling Burgandy’. I love its tall rosettes of dark foliage. I have never staked it because a stake would spoil its appearance. The wind has blown it to rather a strange angle this year, but never mind, it hasn’t snapped off. and it looks good with the purple leaved Heuchera. 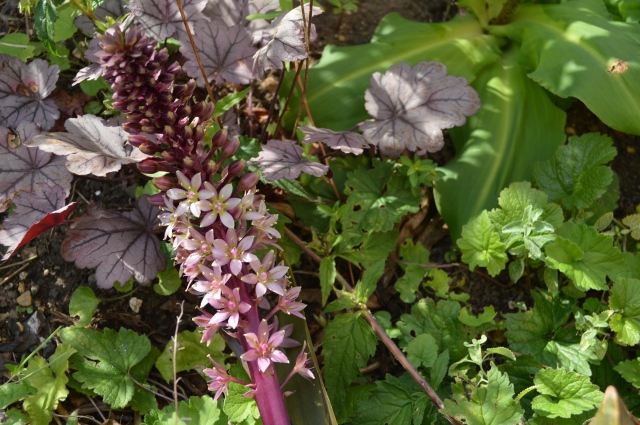 I keep the neat little Eucomis autumnalis ‘White Dwarf’ in a pot. 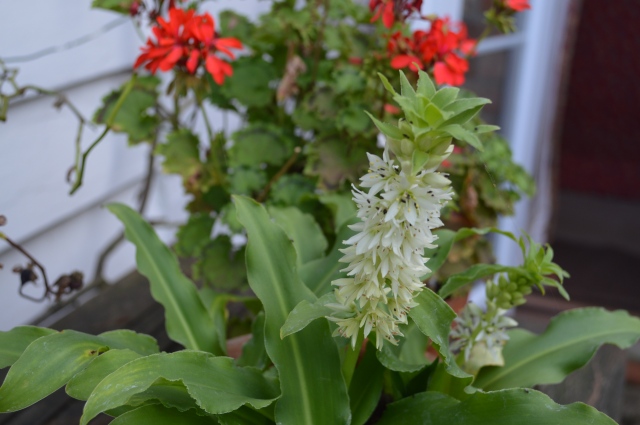 Some nice deep reds are provided by the chocolate Cosmos which really does smell of chocolate. It is not hardy so you have to take cuttings or dig it it up in autumn.  It is called Cosmos atrosanguineus. It comes from Mexico where it is now extinct.  There other dark red shades are provided by seedlings of Dahlia ‘The Bishop of Llandaff’.

The water lilies in the pond are coming to an end but I love this little sedge from Florida with its white starry flowers. It is called Dichroma latifolia. I read somewhere that it is not hardy but it has survived in my pond for 2 years now. 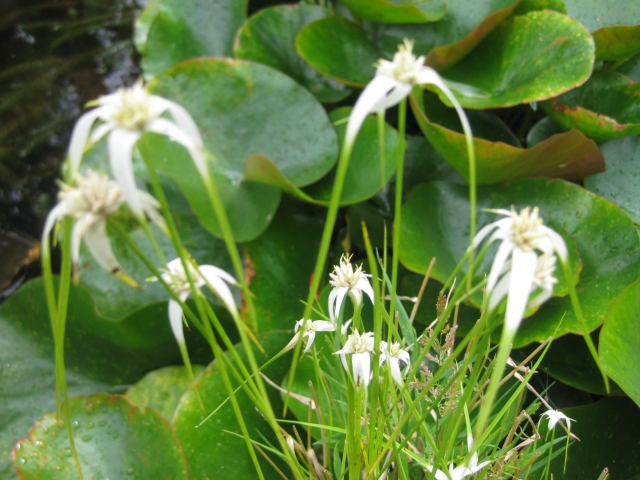 Now for the shades of pink. Particularly valued at the moment is the Crinum x powellii. I believe it is sometimes called the swamp lily, which is silly because it is not a lily and it doesn’t like water logged soil. At least not in this country. I am told that it is not reliably hardy, but I have never known it succumb to frost and I have been growing it for years. 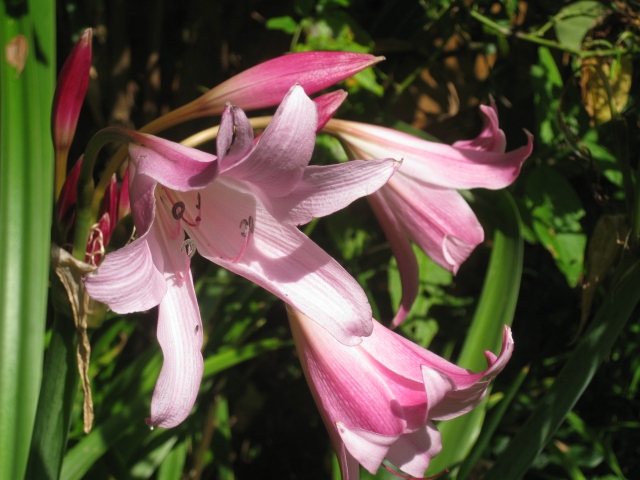 The next plant is a tall growing annual Persicaria. This is Persicaria orientalis. It’s common name is ‘Kiss Me Over the Garden Gate’. I usually prefer to stick to the Latin and then we all know where we are, but this is such a fun name. It is probably called this because it can grow six feet tall. It has lovely dangling, shocking pink tassels. I first saw it in Merriments Garden, in Kent, years ago and had to have it. For some reason the seeds are hard to come by. Even if you can get the seeds the slugs love the young plants. I wish I had managed to keep a few more safe from them. A big clump would have looked wonderful. 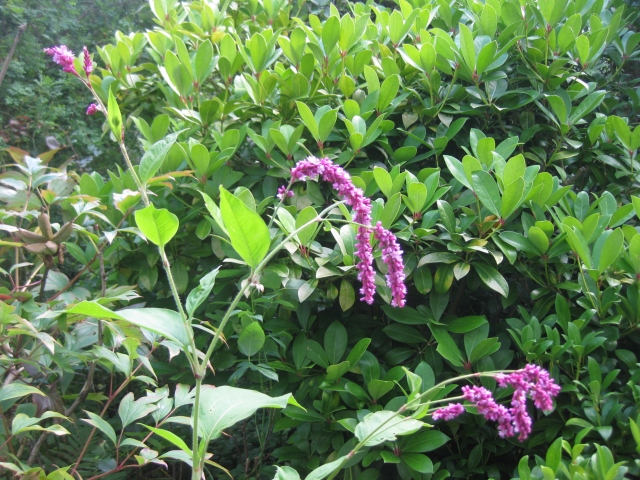 In the front garden there are more shades of pink because penstemons and salvias are still going strong. The lilac coloured Tulbaghia violacea has been in flower for ages. 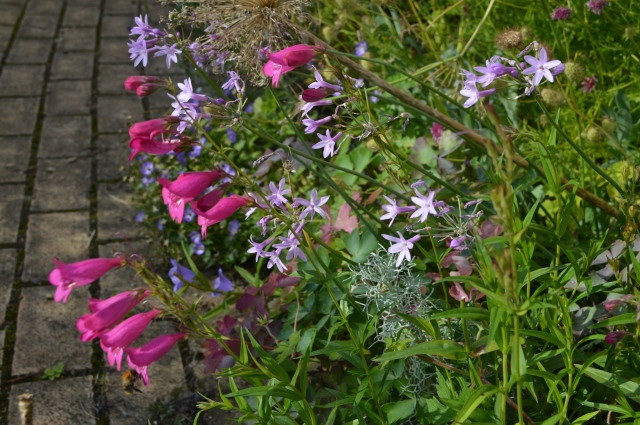 The purple climber; Solanum crispum ‘Glasnevin’ or the Chilean Potato Vine has been flowering for ages and is coming to an end now. The much more refined white Solanum jasminoides is just coming into bloom. I much prefer it. It has a slight fragrance. It is not suposed to be quite hardy but I have had mine for 4 years now. 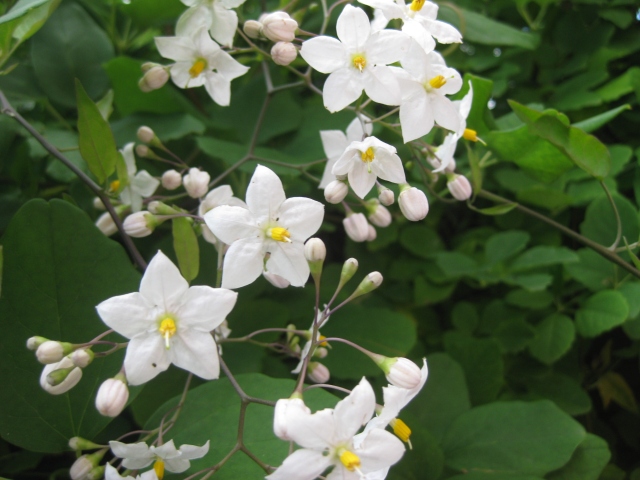 The next picture is a beautiful late flowering shrub; Hibiscus syriacus. This lovely plant always comes into leaf so late that you begin to wonder if it is dead. You have to wait until now for the lovely blooms but they are worth the wait.
Ivan Dickens who used to be chief propagator for Notcutts Nursery gave me mine years ago, when it was a tiny bit of a thing. I thing it was one he had bred himself. I am not sure if it had a name, if it did I am afraid I can’t remember it, but it is such a pretty lavender colour. 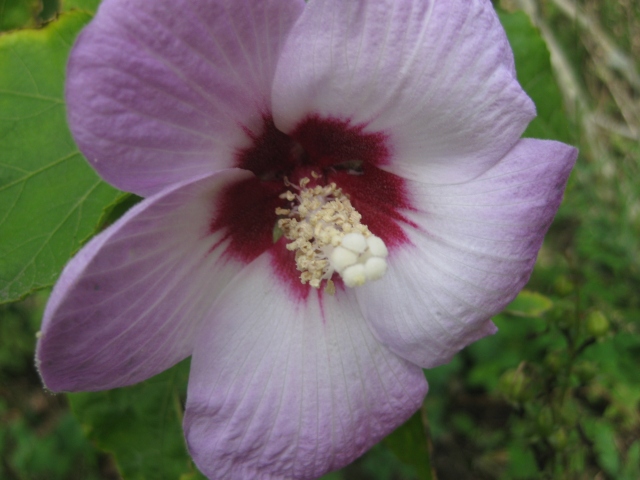 The summer is advancing I am afraid and little Cyclamen hederifolium are coming into bloom now. We expect them in August but I was rather surprised to see this autumn flowering Colchicum showing its dainty head. I felt like telling it to go back, I am not ready for Colchicums yet. 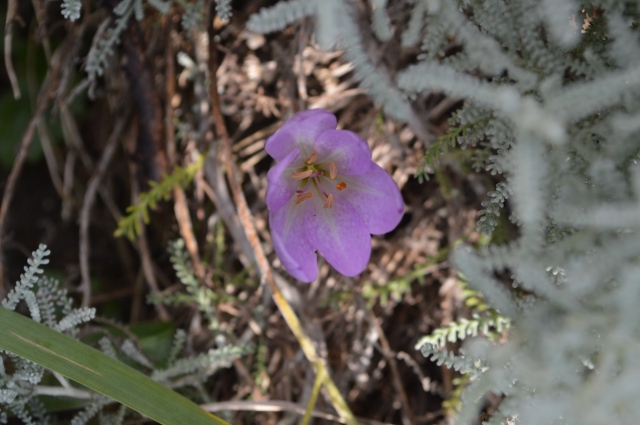 I am joining in with the meme hosted by Carol at Maydreamgardens where garden bloggers show us what they have in bloom on the 15th of each month. Do join in and go over to see what Carol and other people round the world have in bloom at the moment.