For us a  summer visit to Minsmere starts with a visit to a fish and chip shop in Aldeburgh which is reputed to have the best fish and chips in Suffolk. We eat them on the beach north of the town overlooking the controversial stainless steel sculpture  ‘The Scallop’ by Maggi Hambling.

This statue was unveiled in 2003 and is dedicated to Benjamin Britten who used to walk along the beach here. The top is pierced with the words from Peter Grimes; ‘ I hear those voices that will not be drowned’. There was an enormous amount of controversy about this statue being put in a place of natural beauty and it has been vandalised with graffiti and red paint many times. There have been petitions to have it removed, but on the whole I think most people want it to stay.

Further up the coast  you come to Dunwich, ‘the town that fell into the sea’. In the 11th century, it was the 10th largest town in England. Now because of coastal erosion, it is just a small village.  The walks round this part of the coast are wonderful and at the heart of it is the RSPB nature  reserve of Minsmere. It became famous in the UK this year as it was the site for the popular TV series ‘Spring Watch.’ It is a magical place on one of the most beautiful part of the lovely Suffolk coast. It covers  an area of 1000 hectares which includes woodland, heathland, beach, lagoons and reedbeds.  In 1947 the avocet bred her for the first time in the UK . The RSPB took this beautiful bird with its lovely black and white markings and distinctive black, upturned beak, as their logo. It is now a common sight and we were pleased to be able to get a photo of one. 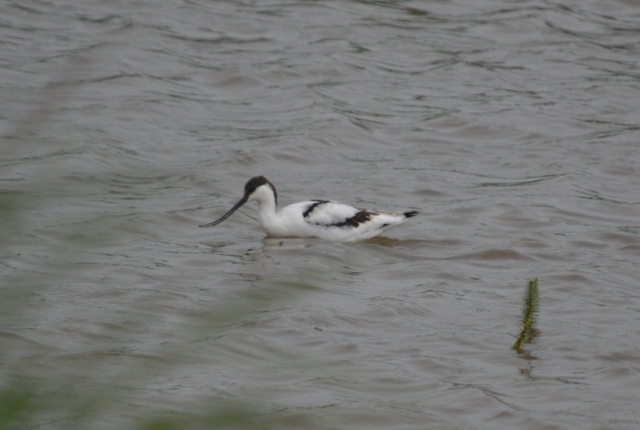 As you go into the reserve you go past Buddleia bushes which are alive with butterflies. We were told to expect white admirals,  silver washed fritillaries, graylings and purple hairstreaks. We just saw commas and red admirals. 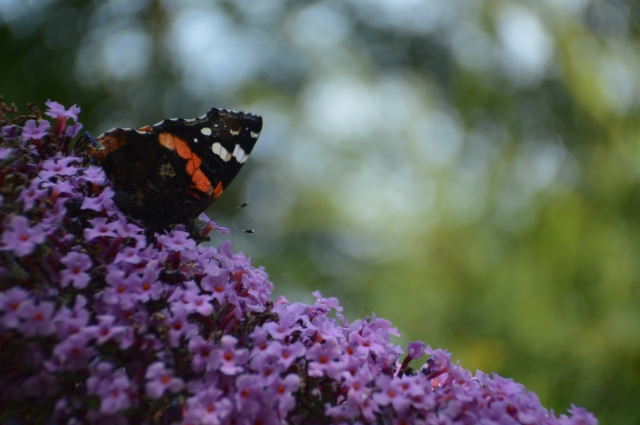 Bugs are encouraged and there is a beautiful insect hotel. 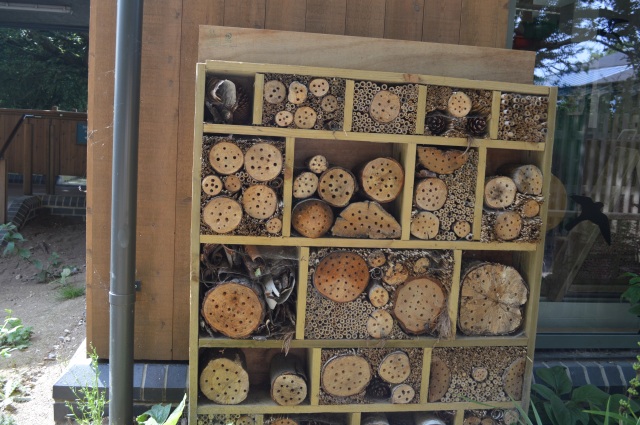 The animals here seem quite fearless, probably because they are used to seeing people. This rabbit couldn’t even be bothered to get up when I approached him.

The squirrel was equally fearless, he just looked at me coolly when I approached but made no effort to run away.

The cute little partridge was a little more cautious but only because his mate had run off. He lingered to weigh me up. 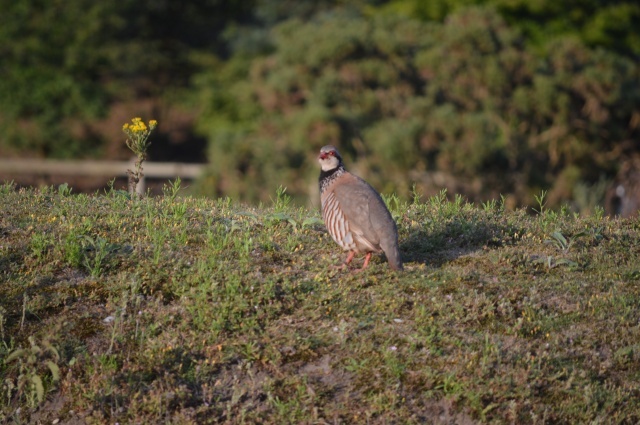 We made our way through the woodland to the bittern hide because we had read about the great success story in bitterns breeding here. Anyone watching Springwatch will have seen plenty of bittern footage. In late Victorian times these intriguing birds were thought to be extinct in the UK but they have made an amazing comeback and the greatest number of them are found here. Their loud booming call is thrilling to hear. We were delighted to see a bittern after only watching for a short time.

There is the largest herd of red deer in England in the woods here but we didn’t see any on this occasion. I loved this spider’s web shimmering in the sunlight though.

And these gorgeous toadstools caught my eye. 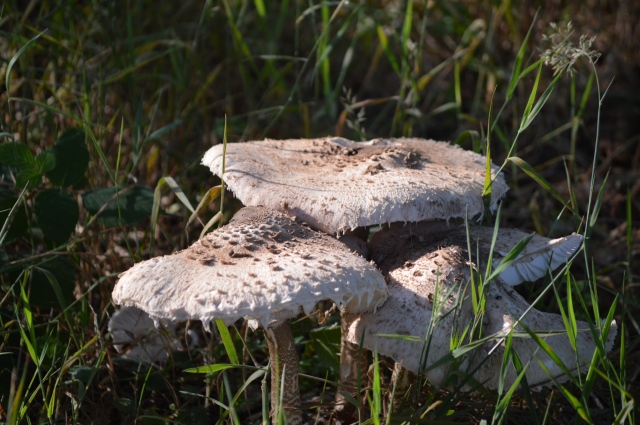 There are extensive reedbeds at Minsmere which are home to many rare birds. There are Marsh Harriers, Reed Warblers and Bearded Tits to name but a few. Otters and water rats make their home here too.  There was great excitement in the hides because a very rare bird, a Collared Pratincole was about. I had never even heard of this bird, but I got caught up in the excitement, specially when we missed it by less than 10 minutes when we went into the East Hide.

I loved watching the birds and there were so many different waders that it was a problem sorting them all out. We were delighted to pick out the redshank with its distinctive red legs and long red bill. 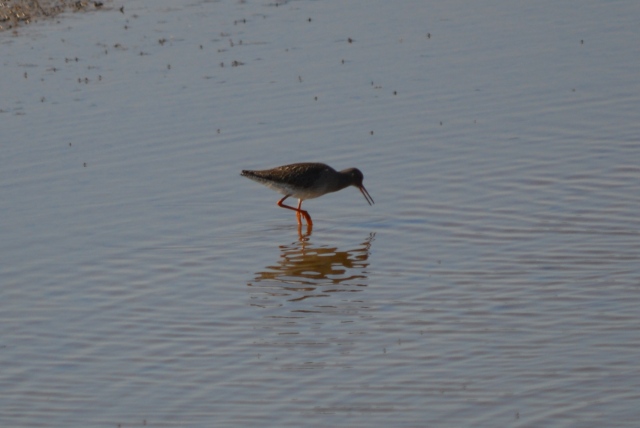 These cormorants looked as if they were sunbathing.

We made our way to the beach and passed little streams with water plants. This is water crowfoot: Ranunculus peltatus.

We also saw yellow water lily: Nuphar lutea. The common name of this is Brandy- Bottle because it is supposed to resemble a brandy bottle and also because it smells of brandy.

The view is rather marred by Sizewell nuclear power station which strikes a rather sinister note into such an unspoilt part of the countryside.

The lovely Marshmallow; Althaea officinalis is becoming quite rare but it grows in abundance here. The sweet delicacy, Marshmallow used to be made from its mucilaginous roots. The whole plant was used medicinally. 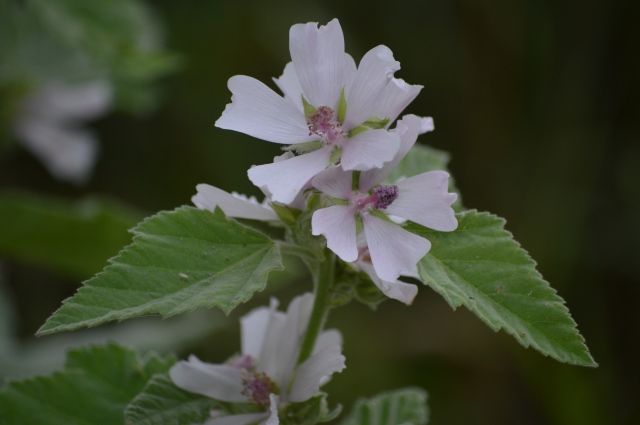 Teasels grow in abundance to.. It used to be thought to cure the ague. The secret was to open the head up in autumn and find a worm concealed in the centre. If you could find 5 or 7 of these, (it had to be an odd number,) you had to seal these worms up in a quill and wear them. That would keep you safe from ague which I think was malaria. Another cure for ague was to swallow a spider wrapped in a raisin, which was disgusting, but a lot less bother.

Along the beach you can find the lovely glaucous leaves of seakale: Crambe maritima. 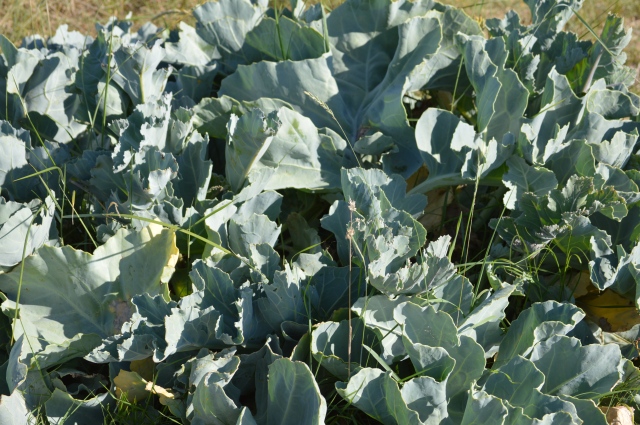 Most of the yellow horned sea poppy: Glaucium flavum was over. But we found one plant in flower. The name comes from the amazing horned seed pods.

The Latin name, Glaucium comes from Glaucus, the son of Neptune and Nais, a sea nymph. He was rather fond of fishing and eventually he became a merman and returned to the sea. He loved Scylla who was turned into a rock; I can’t quite remember why, but this sort of thing happened to you a lot  in ancient Greece.

You can walk along the beach and return to the bird sanctuary past this piece of art made from bits of plastic thrown up from the sea. 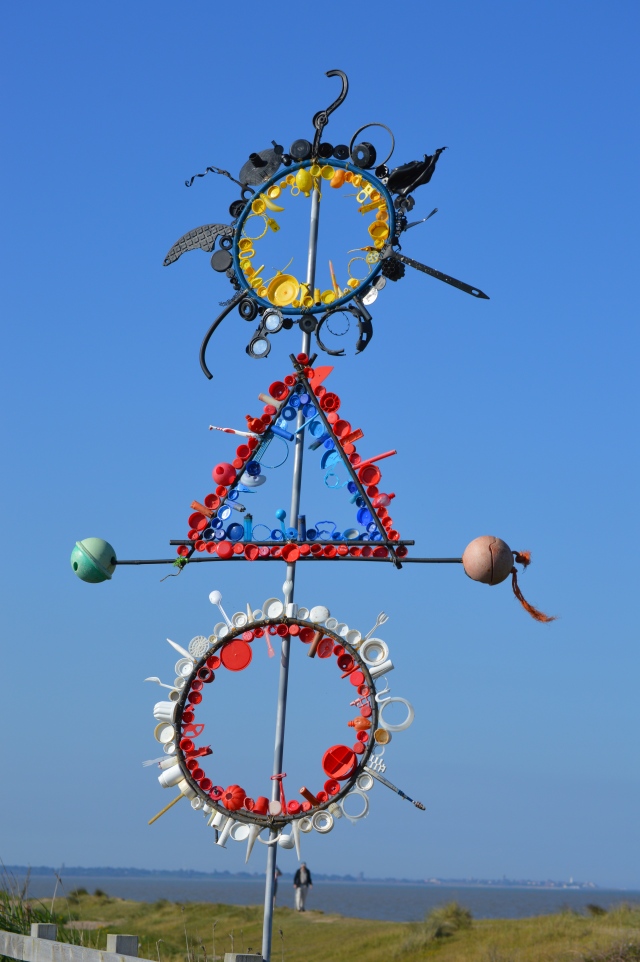 I have always loved the button flowers of Tansy: Tanacetum vulgare. It reminds me of a picture in Cicely Mary Barker’s Flower Fairy book which I loved as a child. I once planted some of this  in my garden but I regretted it. It is terribly invasive.

Pulicaria dysenterica or Fleabane was used as its name suggests to keep fleas away. I love its little yellow daisy flowers.

I love the fluffy seedheads of Trifolium arvense, Hare’s-foot Clover. it is happy in the sandy soil of the coast.

I will finish with a very rare flower which is nationally scarce. I had been very excited to see it. It is called Filago lutescens: Red Tipped Cudweed. It is not to be confused with Common Cudweed.

I’m afraid the Pianist was quite underwhelmed by this little flower and I must confess I was a tad disappointed.
We had a wonderful day, even though The Pianist did sum it up as the day we got to see Red-Tipped Cudweed and nearly saw a Collared Pratincole. I think for our next day out he wants to go to London. He can’t take the excitement.