In a Vase on Monday. Bora da.

Today I am joining in with Cathy’ s meme and my vase has a Welsh theme because I am using my lovely new Port Meirion jug which I bought last week on a visit to Port Meirion. I have picked some showy, white  snowballs from my Viburnum opulus to put with some pale pink flowers of Weigela ‘Florida variegata’.  The trouble with the snowball bush is that the flowers are so heavy that they hang their heads. I wanted some at the top too but they wouldn’t oblige. These are both huge shrubs which were here when we moved in. I have added some pale green and white leaves of Cornus alba. I have also used some tall flag irises and red campion; Silene dioica to give it a country look.  A spray of the early flowering Rosa hugonis, Philadelphus and honeysuckle give the arrangement fragrance.  I have also used a spiky pink Linaria purpurea ‘Canon Went’, some yellow Phlomis fruticosa and a dark purple Aquilegia next to Euphorbia palustris. I was tempted to pop in a couple of peonies but I couldn’t bring myself to cut  them. 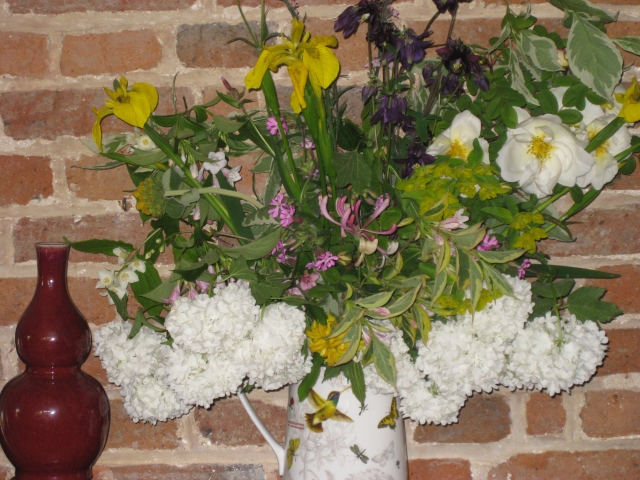 Last week we went to see this wonderful village in Wales. It was created in 1926 by Clough Williams Ellis who bought the beautiful promontory for less than £5000. He was an architect and designed a quirky Italianate village. It is familiar to anyone who saw the mysterious  TV series ‘The Prisoner’ which ran for 17 episodes and starred Patrick McGoohan.

The buildings are quite an eclectic mix of styles. Some of them were salvaged from demolition sites. Some have classical features, others are more representative of the Arts and Crafts movement. The whole village is charming and unusual.

This is the Town hall, also known as the Hercules Hall because of the statue of Hercules in front of it. It is an Arts and Crafts building which was designed to house the Jacobean ceiling and mullioned windows salvaged from a building in Wales.

The next shot shows Clough’s favourite building: The Unicorn House which gets its name from the unicorn on the pediment. This building is built in the Palladian style.

This colonnade dates from 1760 and comes from the Bath House at Bristol.  Clough bought it; had it dismantled and then reassembled on site.

This quirky building; The Round House was used as Number 6’s residence in the Prisoner. The huge Echium pininana shows how sheltered this site is. I can’t get it to overwinter in my Suffolk garden.

I love this old petrol pump with a painted pine figure head. The original was stolen in 1983 and this is a copy.

The beach here is fantastic and there are wonderful views. 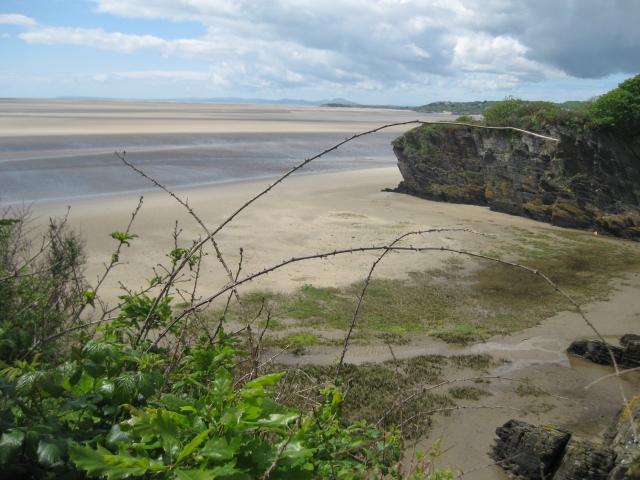 This is just a taste of this fascinating place, it is well worth a visit.

The famous pottery was established in 1960 by Clough’s daughter Susan Williams-Ellis and her husband. I love my jug and when these flowers are over I shall use it for elderflower cordial.

Thank you to Cathy from ramblinginthegarden for hosting this meme. I am afraid my enthusiasm for Port Meirion has made me ramble rather from the topic of in a vase on Monday. But I wanted to show you where my lovely jug came from.

38 Responses to In a Vase on Monday. Bora da.