This is the story of my orchard. When we came here  we were delighted to have a very old orchard with many ancient fruit trees. There was a little gate at the end of the garden with a pretty rural view. 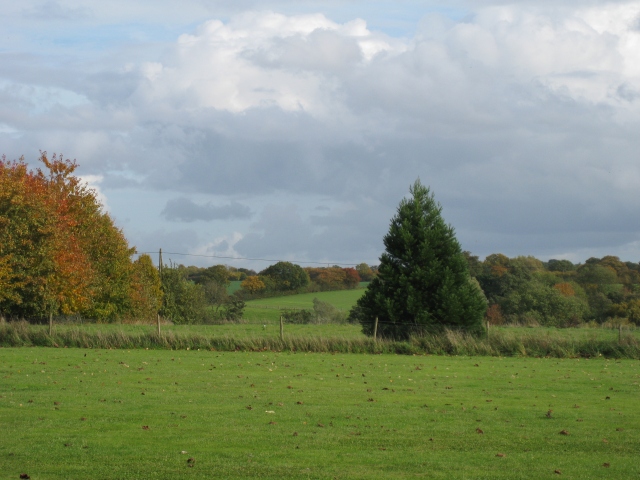 It was only when the tell-tale honey-coloured  mushrooms appeared round each stump that we realised the problem. We  peeled the bark away from the dead wood and saw the white mycelial mats between the wood and bark. We had the dreaded honey fungus. I told one non-horticultural friend that I had honey fungus in the garden and she rather endearingly said: ‘How lovely!’ Perhaps she imagined that it was a delicious sort of edible mushroom, which apparently it is. You can eat it. But most people shrink away from me in horror when I tell them. They seem to imagine that I carry the horrid spores about my person. Apparently the spores are not  so much the problem. Honey fungus spreads mostly by horrible black bootlace -type rhizomorphs which spread under ground until they find fresh wood to consume. Every source I read recommended getting rid of the stumps and digging down to put barriers in the soil to protect the trees. The cost of hiring somebody to do the job with a stump grinder was prohibitive. And digging down to put barriers in place is quite impractical: I have seen the mushrooms coming up at a distance from many of the trees. I suspect after many, many years it is everywhere. For a while I turned my attention to the rest of the garden which needed a lot of care. I made a vegetable garden in the orchard but that was all I did. At first I was frightened to plant any new trees. I read that apple trees which belong to the Rosaceae family are particularly susceptible. Who would have thought that an apple tree is a rose? After nearly four years, I have not lost any more fruit trees, although one of the birch trees in the little group at the end of the garden keeled over. I hope the other eight will be all right.

If you think about it, there must be honey fungus in every wood in the country. It is nature’s way of getting rid of dead wood.  Without it we wouldn’t be able to move for dead trees. I decided to stop worrying about it and to concentrate on keeping my existing trees as healthy and strong as possible. I even planted a couple of new trees. I missed the lovely quince: Cydonia oblonga ‘Vranja’  I had in my previous garden so I planted one. The blossom is beautiful and I love the aromatic fruit.

I also planted a Polstead Black Cherry tree. This a variety from a nearby village which is famous for its lovely black cherries.

I had a birthday recently and with a certain amount of guidance and hinting the Pianist bought me a beautiful Malus hupehensis ‘Princeton Cardinal’.  I love the whole genus  of crab apple trees for their blossom and fruit but the blossom on this one is particularly pretty. 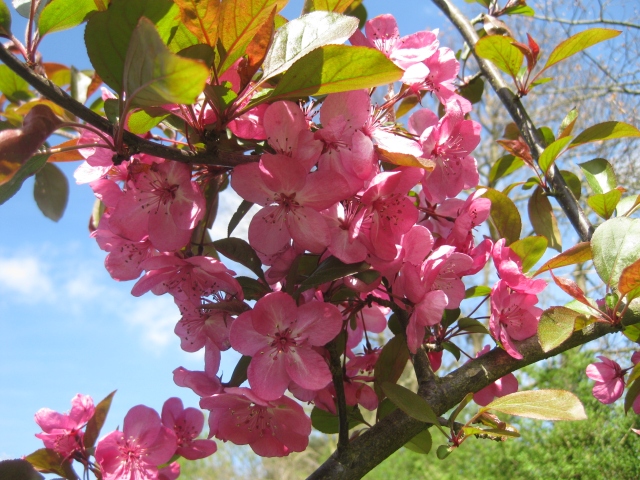 All the trees in the orchard are looking healthy and lovely this spring. This pear tree is particularly full of blossom. Oh dear, I hope this isn’t a bad sign.

The two mature horse chestnut trees get canker every autumn but most of the trees in the country seem to do so in the last few years. But in spring they look wonderful.

There are trees which are supposed to be less likely to succumb to honey fungus but none of them particularly appeal to me. This has been an orchard for several hundred years I don’t want to change it. So there we are, I have learnt to live with honey fungus. More of my trees may succumb in the future and suffer from sudden death. But then this  distressing phenomenon is not confined to trees. In the meantime I will enjoy them.

I do keep reading about honey fungus to see if there is some magic elixir which I don’t know about. I read on one internet site that Early Purple Orchids: Orchis mascula help because they thrive on the fungus. I did buy one but then it occurred to me that to buy enough to make a difference would be more expensive than hiring a stump grinder. Prettier though.

Someone told me that fresh manure helps protect trees so every tree has a cushion of manure round it. Apart from this I am relying on spells and incantations:

‘Eye of newt and toe of frog