One of the most spectacular views on the Cote d’Azur is from the hill top town of Eze.  It is situated between Nice and Monaco. From here you look down on Cap Ferrat and on a clear day you can see Corsica. The eagle’s nest of the ancient fortress which is now in ruins is  perched 429 metres above sea level. The story goes there was once a temple to Isis here built by the Phoenicians.

Now there is an exotic garden with steps and paths clinging precariously to the rock face. It was built after the war but it was brought up to date in 2004.  It must have been a mammoth job carrying up bags of boulders and rocks and then terracing the site. The plants are mostly succulents; Cacti, Agaves and Euphorbia. These are plants suited to  the baking, south- facing rocks. This is one of the most spectacular sites for a garden I have ever seen. 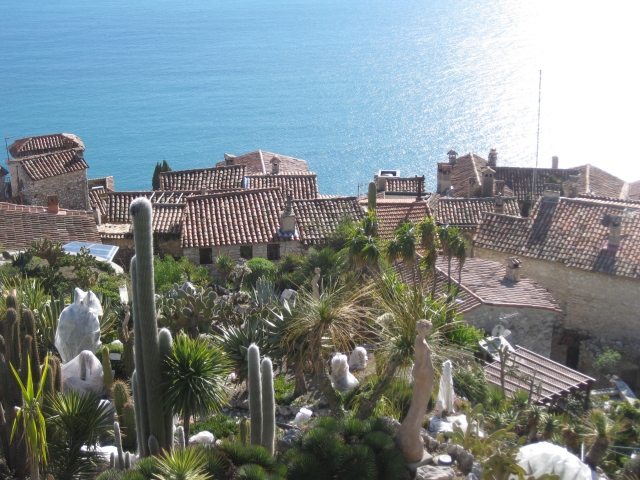 Throughout this wonderful garden you find earth goddesses, the work of the sculptor Jean-Philippe Richard. This seems so appropriate for a site that was dedicated to Isis, the great Egyptian goddess. These mysterious figures stand vigil, watching over the garden. Some of them gaze enigmatically out to sea. Each is named and accompanied by a  short poem.

If like Reginald Farrer you feel you are turning into a ‘white-eyed troglodyte’ in the dark winter months this is the place to be. Provence has had far more rain than usual this winter but there are still plenty of warm days  like the one last week when these photographs were taken.   Blue sky, sun, crystal -clear air and a turquoise sea. Heaven!

30 Responses to Eze. The Exotic Garden.