Many of the people whose blogs I read are busy ordering their seeds at the moment. Two of the catalogues I enjoy are Chilterns and Plant World Seeds. Chilterns have no pictures but Plant World tempt you with pictures of plants you just have to grow. I have only got as far as Aquilegias and I seem to  have too many already. If you are like me you probably never even get as far as  Z, which means you will miss the lovely annual with the impossible name; Zaluzianskya capensis. It comes from South Africa and was named after a botanist from Prague called Adam Zaluziansky von Zaluszian.   Its common name is ‘Night Phlox’ which is just as well as the Latin name doesn’t exactly trip off the tongue.The flowers are  a very pretty white stars with  purple-maroon backs to them. They close up during the day and open up at dusk to release a wonderful fragrance. I can best describe it as a combination of vanilla, marzipan and honey, but that doesn’t do it justice. They are easy to grow and I think the best way to enjoy them is to grow them in pots and in summer keep them on your terrace under the window or in the conservatory. I bring a pot of them into the house when we have friends round and everyone is always bowled over by the  delicious perfume.  Everyone thinks they must be some impossibly exotic plant rather than an easy to grow annual. 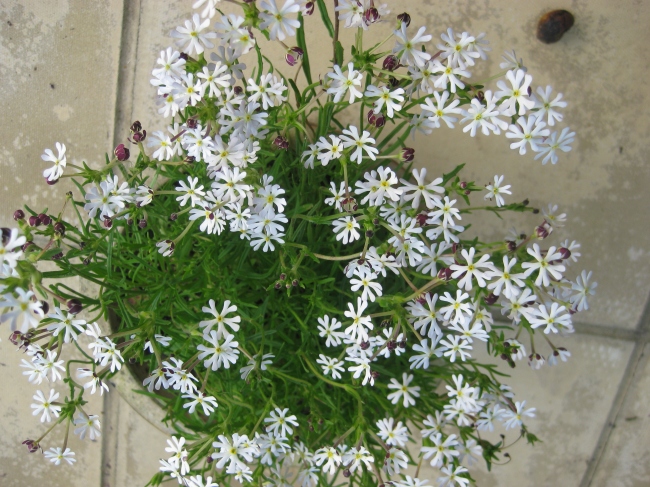 I’ve just noticed there is a snail on the right of the picture, how strange that I didn’t notice it at the time.

I usually grow a few pots of Night Phlox  to give as gifts to my friends because not many people seem to know it . That’s probably  because it comes at the end of the seed catalogue and has a difficult to remember name.  Do try it you won’t be disappointed.