Another gloomy November day and what can you do but dream of next year’s garden or review the delights of this last summer which has past with such indecent haste?

If you live in an old cottage in deepest rural Suffolk then of course hollyhocks are mandatory just like roses round the door. You don’t even have to plant them they just seem to appear. Except the one I fell totally in love with last June just appeared in my neighbour’s garden and not mine. Life can be unfair sometimes. Of course I could go and look at it and take photos of it but every gardener knows that awful feeling of covetousness when it comes to plants. Whilst it was in flower I lay awake at night wishing it was mine. All the other hollyhocks in our gardens here are single so I wonder how this came about and why in her garden?  The flowers are not fully double but they each have a little ruff inside like bits of torn up petal. And the colour is such a sparkling pink. It is so superior to any of the other hollyhocks round here that it should be called something different.

My other hollyhock is not really a hollyhock at all or though it looks like one and is closely related. It is called X Alcalthea suffratescens ‘Parkallee’.  It flowers in August and September when the hollyhocks are all but finished.This gorgeous plant is sometimes listed as an Alcea, (hollyhock) and sometimes as a Malva, (mallow). It is neither of these; nor is it a Lavatera or a Kitaibelia which has similar shaped flowers.It is genetically close to all of these, as it is said to be a hybrid between Alcea rosea, (hollyhock) and Althaea officinalis. (Marshmallow.)  Marshmallow is an increasingly rare wild flower although I have seen it growing wild in marshy ground around Dunwich on the Suffolk coast. It has healthy blue-green leaves and pale pink flowers.  ‘Parkallee’ was bred in Hungary in 1953 by Prof. Zoltan Kovats and then propagated in East Germany and made available in the 1990s. It has delectable satiny flowers in the palest peach, turning creamy with age. It flowers over a long period on very tall bushy plants. The flowers are not actually double but they have a centre frill of smaller petals. It has a very similar sister called x Alcalthaea suffrutescens ‘Parkrondell’ which is dark pink.

The aim in producing these lovely plants was to combine the disease resistance of the wild marshmallow with the lovely colours of the hollyhock. Most hollyhocks of course become disfigured by rust; a fungus called Puccinia malvacearum, but these plants which become more like bushes with age are very rust resistant. They grow to over 3 metres tall so need to be well staked or they topple over. They do not set seed as they are hybrids so I was surprised to see a website offering seed of them. They are very easy from cuttings though, I have had 100% success rate with this means of propagating them. Most hollyhocks are short-lived perennials but my plants are now three years old and lovely big healthy plants. Like all hollyhocks they have a long tap root so they are difficult to move, but as they are so easy from cuttings this is not a problem.This is certainly a plant to give your garden a bit of late summer glamour. 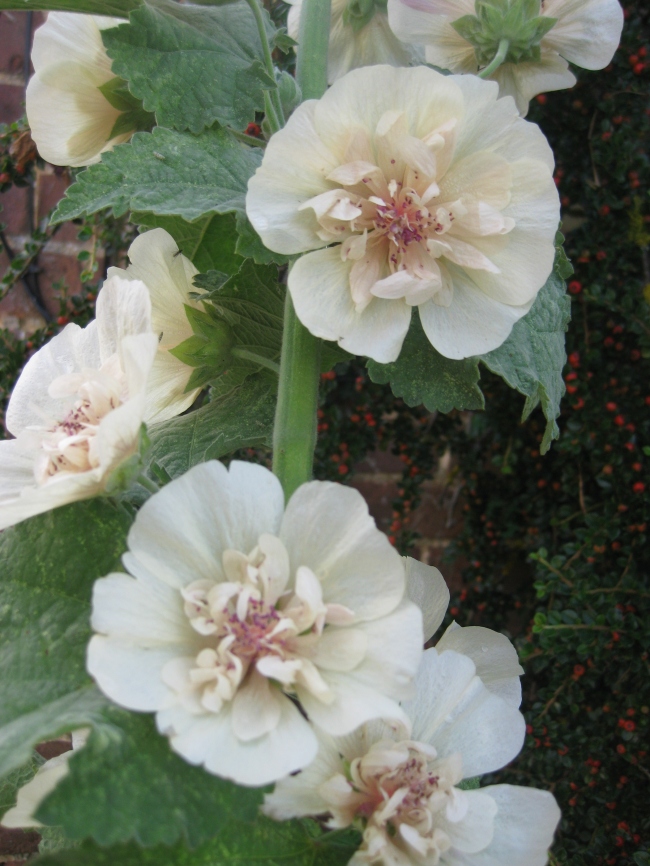